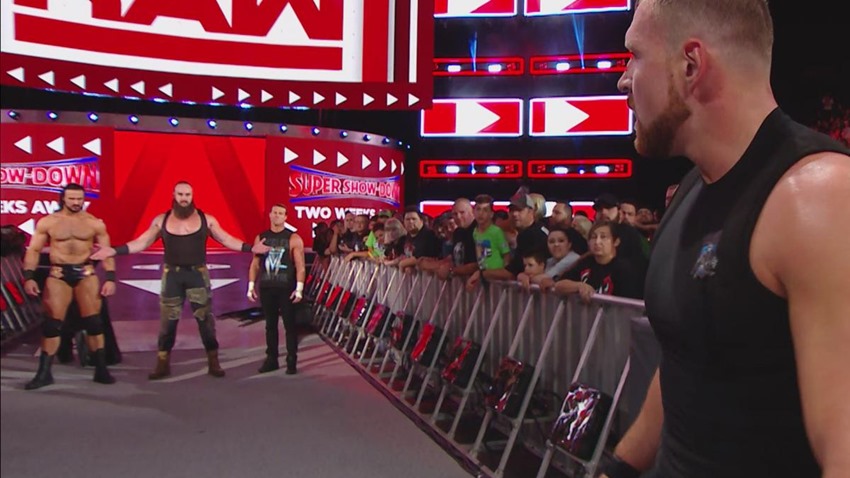 WWE Monday Night RAW took place from the Pepsi Center in Denver, Colorado. Here’s all the action that went down last night.

And they all managed to settle their differences with a newfound and mutual respect for one another. Nah, just kidding. What did go down was an attempt by Strowman, Ziggler and Drew McIntyre to cause some dissent amongst the ranks of The Shield, offering Dean Ambrose a chance to hold the Intercontinental championship if he jumoed ship.

The tactic didn’t work, and all men involved instead got themselves slotted into some massive matches for later on in the night.

With an upcoming match against one another in the Mixed Match Challenge, Jinder Mahal and Finn Balor gave each other a taste of what to expect from their respective camps when they clashed in singles competition. The Modern Day Maharaja came up short, with chaos outside the ring contributing to his downfall as Balor picked up the win.

The Riott Squad def. The Bella Twins and Natalya

Even after they were down a face after Brie Bella landed a devastating kick on Liv Morgan, the Riott Squad was far from out in this handicap bout. Using cunning to secure victory, Natalya never noticed that Ruby Riott was the legal lady in the ring, applying a Sharpshooter to Sarah Logan that left her ripe for a finishing Riott Kick.

Holy balls, someone from The Ascension actually won a match. That’s amazing.

Tag team specialists? Perhaps, but Dash and Dawson were just that little bit short of power when it came to grabbing the RAW tag team championship from Dolph Ziggler and Drew McIntyre. The hungry challengers put in an inspired effort, but in the end it ended in a predictable fashion: A Zug Zag Claymore combo, with Ziggler and McIntyre standing tall with their titles.

Thanks to Kevin Owens, Lashley’s payback was scuppered when his bout against the living truth was called off after some ringside interference that the ref picked up on.

Nia Jax, a Samoan Drop and the one tow three. Thank you and good night Alicia Fox.

With the Authors of Pain in Baron Corbin’s corner and the ring flanked by Braun Strowman, Dolph Ziggler and Drew McIntyre, the odds looked dicey for The Shield last night. Somehow, the Hounds of Justice managed to prevail against the odds as a chaotic night saw Dean Ambrose briefly flirt with betraying his comrades in arms before he locked in Dirty Deeds on Corbin and secure the win.