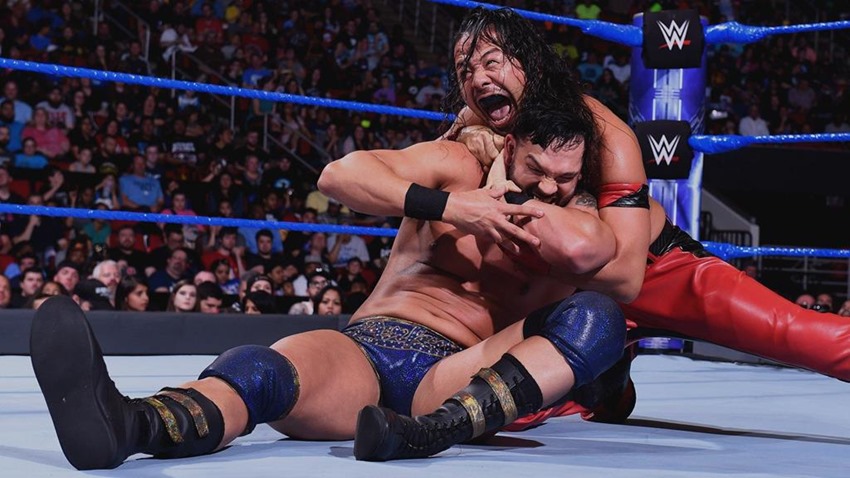 WWE Smackdown LIVE took place from the PNC Arena in Raleigh, North Carolina. Here’s all the action that went down last night.

Symbolically grabbing the promotional Money In The Bank briefcase suspended above the Smackdown LIVE ring, Samoa Joe had a message for the audience: That he was ready to win and rule with an iron fist at the upcoming event. Something that Daniel Bryan took offense to when Joe began detailing how he’d break the plucky underdog, resulting in him entering the ring.

Big Cass had other plans however, as he hopped into the ring with a crutch under his arm and declared that general manager Paige had cleared him to fight in the final Money in the Bank qualifying match of the night. At which point, all chaos broke out as Big Cass tried to get an early advantage.

The perfect 10 versus a man who’ll soon compete in a Last Man Standing match for the WWE championship? Perfect. In a cerebral match, Nakamura would count to ten whenever he laid out Dillinger, but the plucky superstar refused to stay down and battled on. A Kinshasa eventually found its mark however, with Nakamura adding another one for good measure after the bell had rung as he prepared for war against WWE champion AJ Styles.

Naomi and Lana went head up in a Dance-Off

Look, this was just plain weird.

The New Day def. The Miz and The Bar

One of the finest tag teams on Smackdown Live facing off against some of RAW’s greatest former talent? Now that’s a blockbuster in the making! In typical divide and conquer fashion, The Bar and The Miz kept their opponents cornered and under attack as the match wore on and big moves were activated.

The finish came courtesy of Kofi Kingston and Big E, with the acrobatic New Day member keeping The Bar at bay while the big man caught The Miz in a Big Ending to secure a win. Celebrating in the ring, there’s still one question that needs to be asnwered: Which New Day member will challenge the rest of the Smackdown Locker room for Money In The Bank?

With a new streak building beneath her, the Empress of Tomorrow displayed her typical ruthless aggression as she tore into Mandy Rose, shaking off a blindside attack by Sonya DeVille and forcing a tapout victory with the dreaded Asuka Lock. An impressive match, that drew Smackdown LIVE Women’s champion Carmella to the ring for a tense stare-off.

Samoa Joe def. Big Cass and Daniel Bryan in a Money in the Bank Qualifying .Match

Seven slots for Money In the Bank had already been filled. Only one more remained, as Smackdown LIVE’s biggest bruisers battled amongst each other to secure the coveted spot at a chance to earn a golden ticket to championship glory. Buddy, what a slobber-knocker.With size, weight and agility aplenty between Samoa Joe, Big Cass and Daniel Bryan, the match was unpredictable to the extreme and painful to the max. 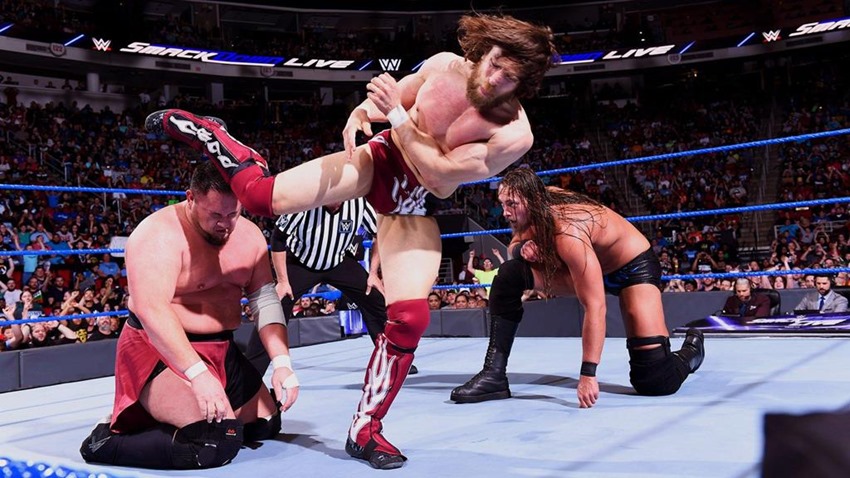 In the end, it was Samoa Joe who proved that his word was good. Having knocked out Big Cass with a Running Knee, Joe grabbed Bryan from behind and locked in the Coquina Clutch. To his credit, Bryan never tapped out but he did pass out, resulting in the ref declaring Joe to be the winner. The night wasn’t over yet for Bryan, for the very moment that he regained consciousness he lost it again when Big Cass applied a big boot to his head