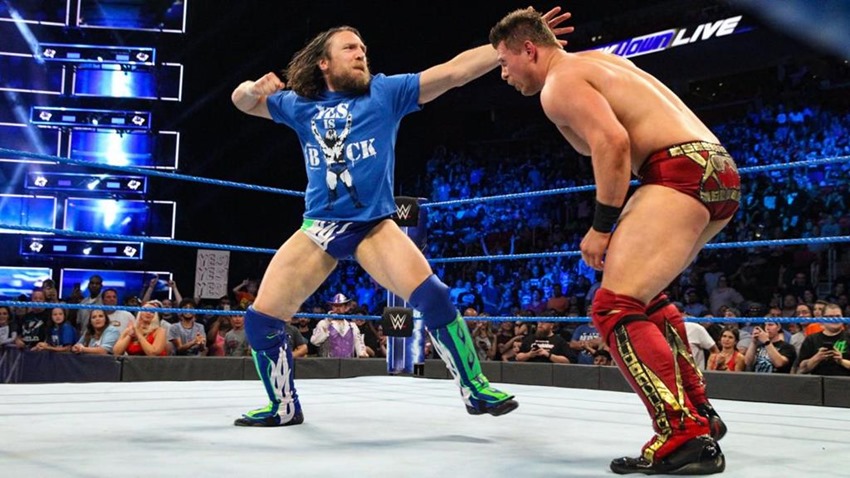 WWE Smackdown LIVE took place from the Little Caesars Arena in Detroit, Michigan. Here’s all the action that went down last night.

Smackdown LIVE kicked off with Daniel Bryan and Brie Bella looking for some of that sweet payback after last week’s assault by The Miz and Maryse, but Bryan’s challenge was met by someone else instead: Andrade Almas. With Zelina Vega at his side, Almas claimed that he was more than ready to face Bryan once again. Heck, he was ready to do it right there as the opening match for the night. A decision that Almas would soon forget.

He may have had the size advantage, but Almas still fell before Bryan after the two engaged in a gruelling match. With a running knee that sent Almas flipping through the air, Bryan picked up the win while his wife Brie mirrored the attack and put Zelina Vega out of action as well. With the bell having been rung, The Miz and Maryse finally appeared…On the Titantron screen.

The Miz was having a high class meal, and he revealed to Bryan that he had no intention to fight him until Hell In A Cell.

With successive losses to the Iiconics, Naomi was hungry for a win. The power of the glow was in Naomi’s corner, as she quickly took care of Billie Kay outside the ring and then caught Peyton Royce in a roll-up pin to earn an overdue victory.

Having had more than enough of Samoa Joe’s threats and taunts regarding his family, AJ Styles unleashed some hardcore fury on the Samoan Submission Machine, clobbering him with a steel chair and preparing to unleash some high risk moves until WWE officials finally intervened.

In triple threat bout that would see the victor face The Bar and decide who will challenge The New Day for the Smackdown LIVE tag team championship, it was Rusev Day that came out on top. It all came down to one move in that match, and that move happened to be a Machka Kick from Rusev that sealed the deal on a win. Next stop, the Bar and then…glory.

R-Truth def. The Miz; Daniel Bryan and Brie Bella sent a message to The Miz and Maryse

In an echo of the Mixed Match Challenge that returns soon, R-Truth hit the ring with his partner for the event, Carmella. Meanwhile, The Miz seemed to be on track to earn a victory against the veteran, until the appearance of Daniel Bryan and Brie Bella distracted the A-Lister long enough for R-Truth to sneak in a pin.

The night wasn’t over yet for The Miz and Maryse, as the duo quickly found themselves looking at a sign of things to come: Andrade Almas and Zelina Vega in YES! Locks, as the duo had attempted to get some measure of revenge on Bryan and Bella, and had come up far too short in the process.