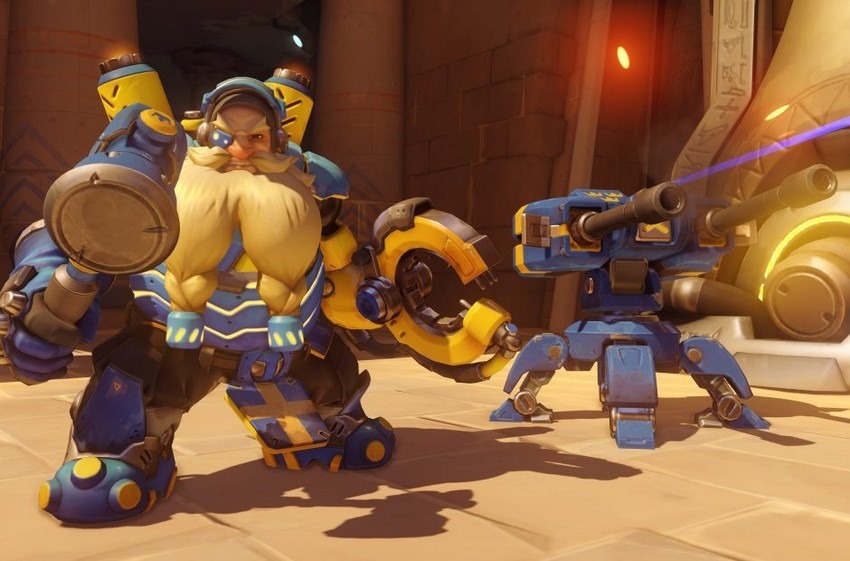 As we heard yesterday, Overwatch’s support class of heroes are getting some big changes soon. These tweaks pale in comparison though when it comes to Blizzard’s recent rework of Symmetra, with the light-based hero being one of two complete character overhauls that the developer has had on their cards for ages. Symmetra 2.0 has been live in the game for a couple of weeks now, but we hadn’t been hearing much about the other hero up for a refresher, Torbjorn. That was until this weekend past when lead designer Geoff Goodman gave an interview to VG247 and broke down exactly what they’re doing with the Swedish builder.

According to Goodman, while the team originally didn’t want to do “anything too massive,” Torbjorn’s current build poses some problems. With the Defense class for heroes went away with the Symmetra 2.0 patch, it left Torbjorn in the new Damage class, but he doesn’t quite fit there either.

With Torbjörn, the issues we’re trying to solve are that he’s a little overly defensive focused. We need him to be more viable on offense in a non-payload situation. It doesn’t mean he needs to be equal on offense, but we need him at least to not be a troll pick.

One of the main issues with Torbjorn is that unlike other heroes, he has a much reduced value until the mid-fight stage as it takes him time to setup and upgrade his turret, and he can only provide armour to teammates by picking up scrap that gets generated from downed enemies. During that initial early engagement though, Torbjorn struggles as “You don’t get to use some of your abilities, your turret’s not as strong”. Once the fight does get going though, Torbjorn can quickly build up his Molten Core ultimate which is often a game changer as it supercharges both him and his turrets so that he can now unleash hell. That’s a problem though, as it makes it even more clear that he’s “not as much of a threat without [his] ultimate ready to go”.

That’s a thing we’re trying to solve. It’s cool when characters have their ultimate and there’s a power spike – being able to use your ultimate at the right time is a big part of the game – but it’s a little too much for him. It does everything, basically.

We may end up with a completely different ultimate at this point because it ties up too much of his power, but that’s still very much in flux so it’s hard to say. First thing we did was try a lot of different takes on Molten Core – maybe we could make it really cheap and take some stuff away from it, we tried it so it only affects the turret and doesn’t give you any buffs, and we tried the reverse so it only affects you.

We definitely tweaked some of the base ability, so you could reload faster as that was frustrating before – you would run out of ammo in the middle of ulting and you can’t shoot anymore. As of now, I think we’ve decided to move away from Molten Core entirely. 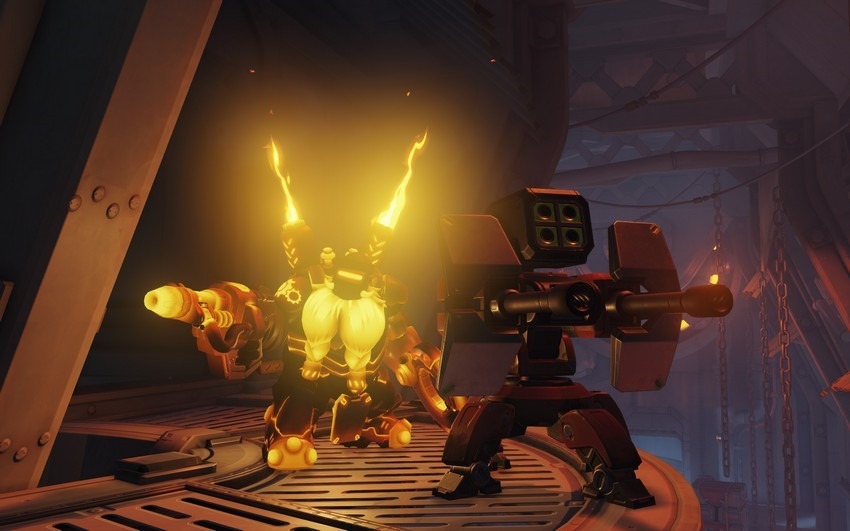 Yep, Molten Core is gone. As somebody who plays Pharah a decent amount I couldn’t be happier as a fired-up turret shooting me out of the sky in no time from a mile off while the enemy Torbjorn was never even aware I was there has never been my idea of fun. As to what will replace Molten Core, Goodman isn’t elaborating as they are still very early in the rework (they haven’t even started working on new art assets yet, as they’re still hashing out the mechanics). What the designer will dish on though is just how they’re thinking of changing his turrets. Taking a page out of their own recent efforts with getting Symmetra’s turrets to a more viable place, it looks look Blizzard is going to give Torbjorn throwable turrets.

Currently, in our internal build, he just tosses it out – not super far, almost like a Tracer Pulse Bomb distance. So you can kind of throw it like that and it deploys itself automatically on level two. It takes a little time to do that but you don’t have to hammer it or anything.

This plays a lot better on offense – especially because you can run up, throw it in a flank spot and be immediately shooting again and not feel like you have to sit there hammering it. Being able to use that and have an extra threat shooting from the side feels really powerful. We can obviously tune the turret if it ends up being too strong or anything, but that’s the place we’re starting from.

Currently Symmetra players are making use of some nice 1v1 traps for enemies using turrets shot out sneakily behind them, and Torbjorn being able to do the same sounds pretty cool. I especially like the idea of the turrets auto-upgrading themselves to level 2. Standing behind them and awkwardly hammering these turrets never made sense to me and definitely wasn’t fun. Since this actually means that Torbjorn’s iconic hammer isn’t actually needed for anything else in his kit anymore, some have suggested that maybe it could form part of his new ultimate? Like he becomes a vertically challenged Swedish Thor or something? His name does basically translate to “thunder bear”, after all.

I’d like to see something as part of his regular kit? Maybe an ability that lets him disrupt shields with his hammer, but on a massive cooldown? (And maybe he can say “Stop… Hammer time!” in a Swedish accent while casting it?) Do you guys have any ideas and what do you think of the proposed changes?