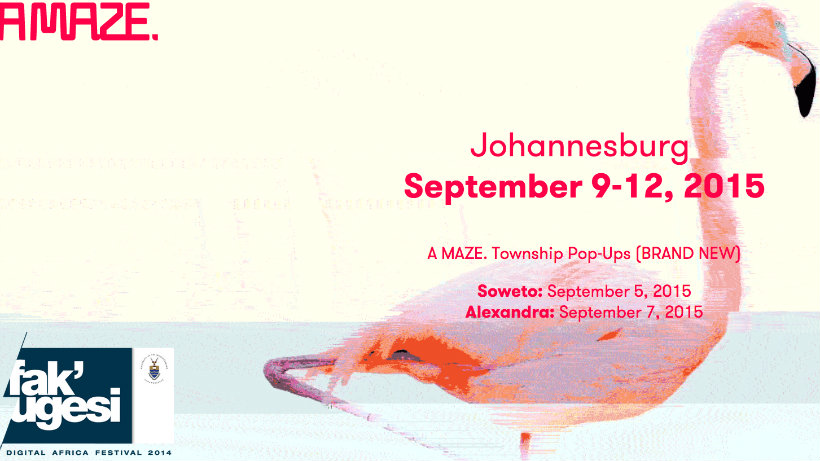 It’s almost that time of year again. A MAZE is coming and it’s a wonderful opportunity for game developers, gamers and fans of subversive play to come together. Filled with workshops, talks, parties and a games arcade, it is all about the counter culture gaming revolution. This year, the festival is expanding, and I like where it’s going.

Last year, I was part of a talk at A MAZE where we talked about ways local game developers can get more out of the media. It was a lot of fun and my first taste of A MAZE. When it returns to Joburg from 9-12 September, it will have all the activities that some might expect from an indie gaming festival. However, this year, Braamfontein will be offering even more from Africa.

The 2015 festival brings with it a plethora of international and African guests addressing topics ranging from creating alternative controllers to games focused on socio-political events. Visitors and participants will come from Kenya; Nigeria; Senegal and Côte d’Ivoire. Eight of the African game guests are being brought to participate in the festival by the Goethe-Institut South Africa.

But the local representation doesn’t stop there. In fact, this year, A MAZE is engaging in some pretty cool pop-up festivals in Soweto and Alexandra.

The A MAZE. Pop-Ups in Soweto and in Alexandra are two one day events, which are inspiring to the youth/ young adults in place. With workshops, short talks, hands-on activities, exhibition of african and european independent video games, music and fun we will introduce game design, alternative game play and give some insights into the independent game business and the worldwide connected community. We are also showing that successful games don’t depend on high budgets only.

Game development might not be a surefire path to success, but it certainly is an interesting industry and the more we can inform people about it, the better. Want to get involved and submit a game or talk idea? It’s not too late – you have until 31 July to submit so be sure to do so over here. This really is a cool initiative for the local industry, so don’t be shy – if you don’t want to submit something, at least attend in September and see what some cool locals have been up to.

A MAZE Johannesburg is kicking off in just a few weeks time, promising another fascinating…