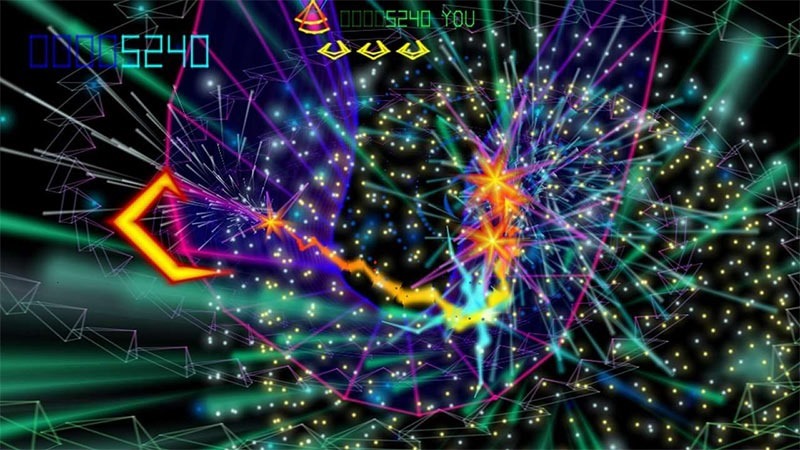 Llamasoft’s Jeff Minter is known for many things – but what hes most known for is the remake of Tempest he did for Atari as Tempest 2000, and the various renamed iterations of the very same game he’s done since then. His latest, TxK was released on the PlayStation Vita – and was set to be released on other platforms this years. Tempest rights holder Atari, However, has put the brakes on the whole thing.

In a series of angry tweets, Minter relayed his dissatisfaction with Atari and its lawyers.

“So yeah all the stuff we had ready or near ready will now never see the light of day,” Minter announced on Twitter. “No TxK PC, PS4, Oculus, GearVR, Android. Thank ‘Atari’.

“It’s achingly sad because I *loved* Atari. Getting to work there, and creating one of their last great games, was such a joy for me. The old icons fall, it seems: Atari become copyright trolls, Nintendo now going F2P it seems…

“I got my dad into games using a VCS (Atari 2600), and on his last ever holiday I was so happy to be able to show him round the ‘bunker on Borregas’. And I was there when it died, and that too was a terribly sad time.

“But I could never have imagined one day being savaged by its undead corpse, my own seminal work turned against me. I am beyond disgusted.”

They’ve lawyered up, to prevent Minter from releasing TxK anew. According to them, TxK – much like Minter’s previous Space Giraffe – are just Tempest, released all over again. That’s what Atari believes, though they insist “there is no lawsuit.”

“Atari values and protects its intellectual property and expects others to respect its copyrights and trademarks. When Llamasoft launched TxK in early 2014, Atari was surprised and dismayed by the very close similarities between TxK and the Tempest franchise. Atari was not alone in noticing the incredible likeness between the titles. Several major gaming outlets also remarked at the similarity of features and overall appearance of TxK to Tempest; one stated of TxK, ‘This is essentially Tempest.’ There is no lawsuit. Atari has been in continuous contact with the developer since the game launched in hopes that the matter would be resolved.”

What’s a bit disgusting though, is the Atari’s implied that Minter stole code and ideas from Atari. The guy who made Tempest 2000 couldn’t possibly have made a similar game with his own skills. Still, there’s certainly a jarring similarity between the two. Atari’s offered up a few choice quotes from the media showing how others believe the same to be true.

“This is essentially Tempest, a classic Atari arcade game (technically the spiritual successor of Tempest 2000) and even an updated look can’t obscure its retro roots.” –IGN

“Though it is technically only a sequel to Atari’s Tempest in spirit, this Vita shooter sports the same vector-style visuals, the same tube-based gameplay, and even the same yellow player ship as the 1981 original, all refined into a stunning modern interpretation.” –Gamespot

“Although it doesn’t use the name, TxK may as well be the proper sequel to Tempest 2000 (or Tempest 3000, if you are more of a Nuon fan). It doesn’t just look and control like Tempest, but it actually uses many of the same power-ups, a few of the level designs and a similar bonus stage. And that’s not even taking into account that it uses the same vector-style graphics we’ve seen employed in all previous Tempest games. TxK is the Tempest sequel I never thought would come out.” –Gaming Nexus

Obviously, the Atari of today is no longer the Atari that actually made great games and some great gaming systems (don’t you dare mention the Jaguar!), but I have to almost side with them on this. Minter has been essentially re-releasing Tempest, with modern iterations, for too long now – like he’s stuck in a loop of trying to perfect the tube-based twitch arcade shooter. Maybe this might give him the impetus he needs to break out of that mould, and develop something new and exciting. I certainly feel heartbroken on Minter’s behalf though.

Here’s a comparison between the two.