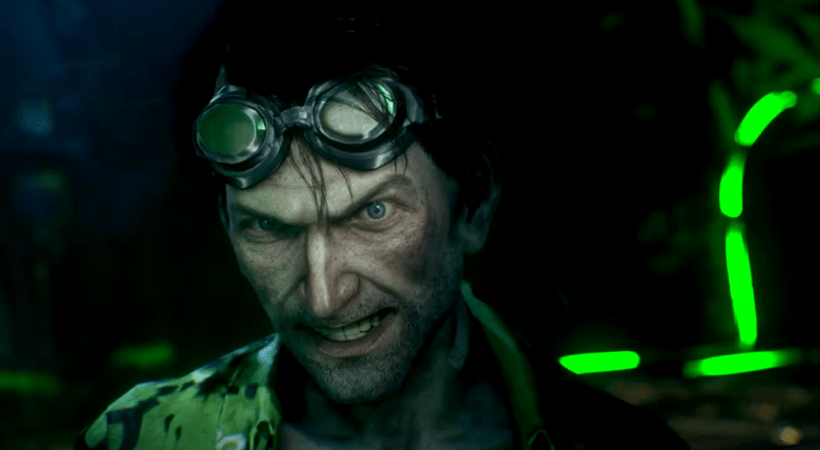 Riddle me this, riddle me that, who’s stumped trying to be the Bat? It wouldn’t be a proper Arkham game without the Riddler popping up to test the intellectual qualities of players, in Batman: Arkham Knight.

And by that, I mean the annoying egotistical piss-head is pulling out all the stops in order to prove his mental superiority over the dark knight. There’ll be plenty of riddles to solve in the game.

But like any genius around, the solution is massively easy: Let someone else do all the hard work for you and just read their guide. Now that’s intelligence.

Bones stripped bare beneath a warning light, pay heed, seafarers, not to feel his bite.

Go to the lighthouse near Ace Chemicals and scan the bones inside.

I bet you weren’t invited to this lavish do, I wonder how many went dressed up as you? 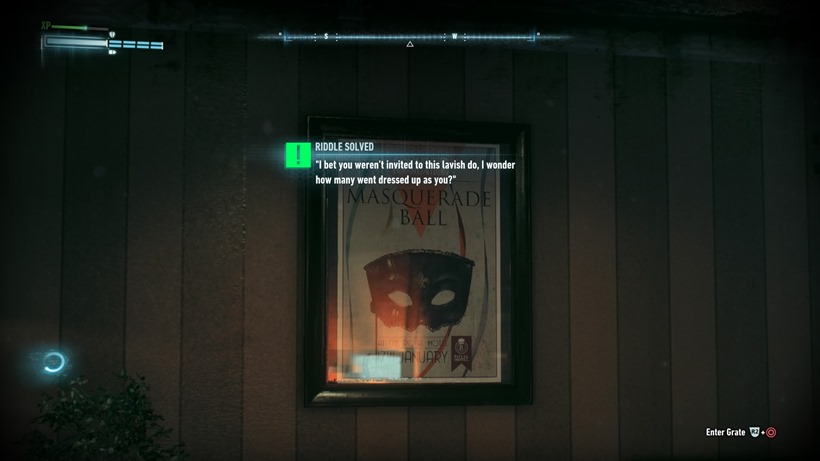 Go in the clock tower, then head upstairs and into the offices. Scan the poster for the ball that’s up on one of the walls.

An open house for bed and dinner, is this sanctuary run by saint or sinner?

At the Deacon Blackfire Mission east of Kirk Langstrom’s Laboratory, scan that location.

Overgrown, abandoned, the inmates set free, madness could never be held in me. 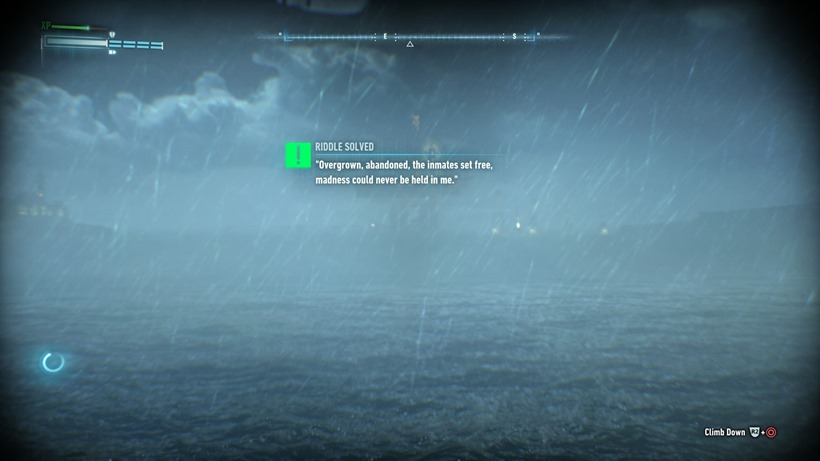 Scan the Arkham Asylum remains on the south-east shoreline.

She stands at our center that we may not weaken, a symbol of hope, a towering beacon. 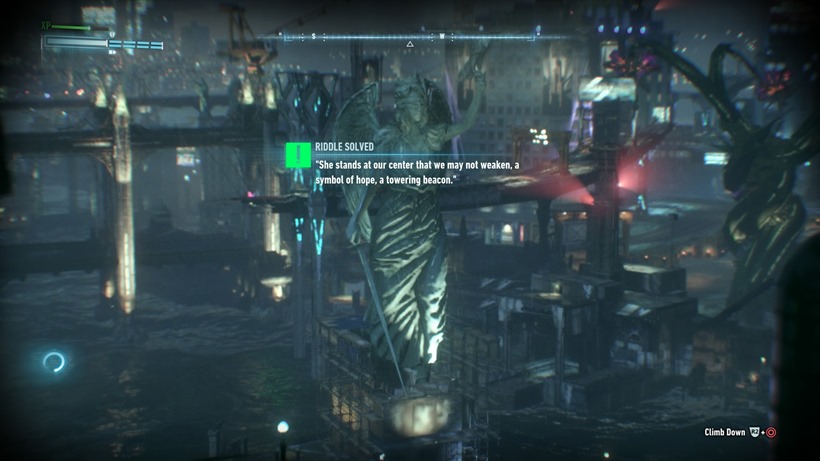 Scan the massive Lady of Gotham statue on the southern coast.

Hope shines brightly in a city this dark, find the source of that signal and you’ll soon hit your mark. 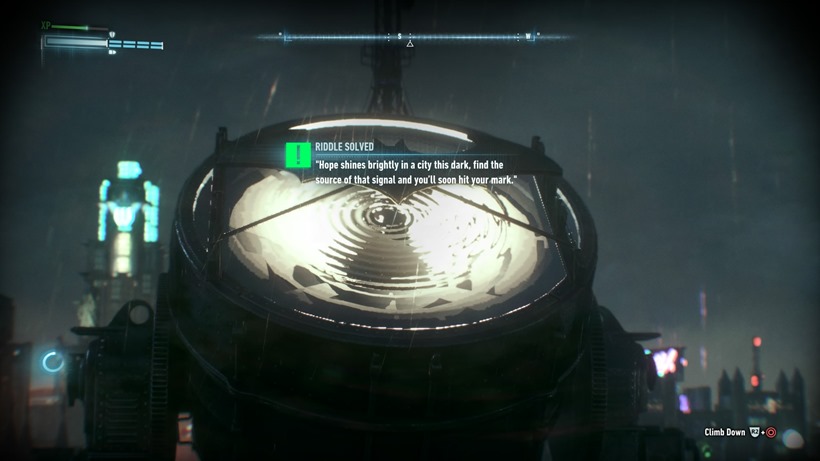 Scan the Bat-signal light on top of the GCPD building.

Always looking for names to besmirch, where does this newsman conduct his research?

Inside the GCPD, scan Jack Ryder’s desk in the top room.

Joining your mission can come with a cost, this empty reminder shows just what she lost.

Inside the Clock Tower, go to Barbara’s room and unlock the terminal with the remote hacking device. Scan her Batgirl costume.

A souvenir from a previous life, why hold with a hand when a hook will suffice?

Scan the family photo near Aaron Cash inside the GCPD.

A bat uses these to see at night, the doc’s didn’t work and his cure caused a fright.

Go to Kirk Langstrom’s Laboratory and scan the drawing on the wall.

Scan the photo on the wall in the comms room of the GCPD Lockup. 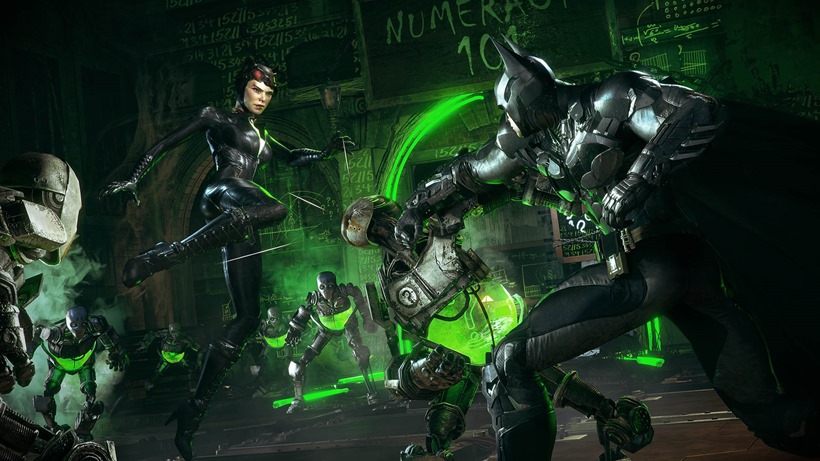 Friends of the Waynes though not as wealthy, their memorial ward keeps Gotham healthy.

At the Elliot Memorial Hospital, scan above the main entrance.

The League of Assassins stuck blades through hearts, now they impale each other’s art.

Search for a small corrugated shack with a flaming oil drum next to it in Kingston, right before the bridge. Scan that.

It doesn’t take much to tame a Cat, make them wear this and then call the bat.

Scan the bomb collar on Catwoman.

You forced this contraption over my brain, I’ll reward you with punishment, debasement and pain.

Inside Pinkney Orphanage, look for a room with a fan on the desk. Scan the helmet device on it.

A natural cure for Scarecrow’s doom, your saviour’s gone but still in bloom.

Are you suffering from a mental split? Take out the trash before you defend it!

Scan the Hell’s Gate building in the lower left of the central section of Miagani island.

Disarming, charming, quite the inquisitor. She’ll pull back the vale, whoever her visitor.

The Prince of Gotham sits high in his tower, yet this picture recalls a happier hour.

Scan the large photo above the bar in the Wayne Tower private office.

A former warden who had a Strange turn, his appointment as mayor was a cause for concern.

Scan Lacy’s department store in the middle of Miagani Island.

The highest building in Arkham City. A Strange man worked here, who took no pity.

Scan the tall building with the massive antenna on the top.

You? A father figure? Don’t make me laugh. You overwork and break your staff. 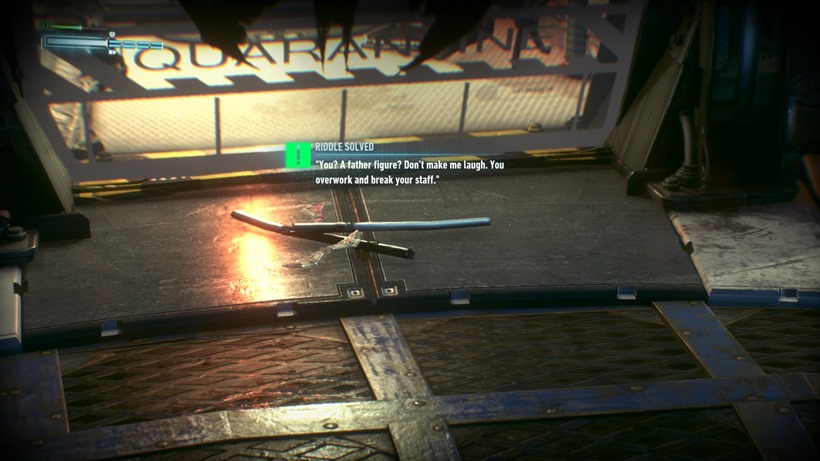 Just walk into the quarantine area and scan the isolation cell where Robin’s broken staff lays.

She and her love are no longer together, she’ll keep the flames burning forever and ever. 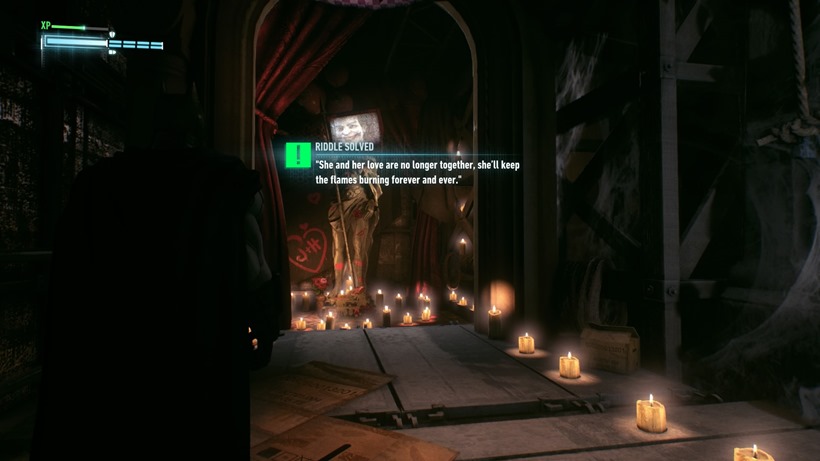 Go backstage, head to Stage A and open the grill with the voice synthesizer tool. Scan the statue to solve the riddle.

A visual artist with burning ambition: prove he made movies before his ignition. 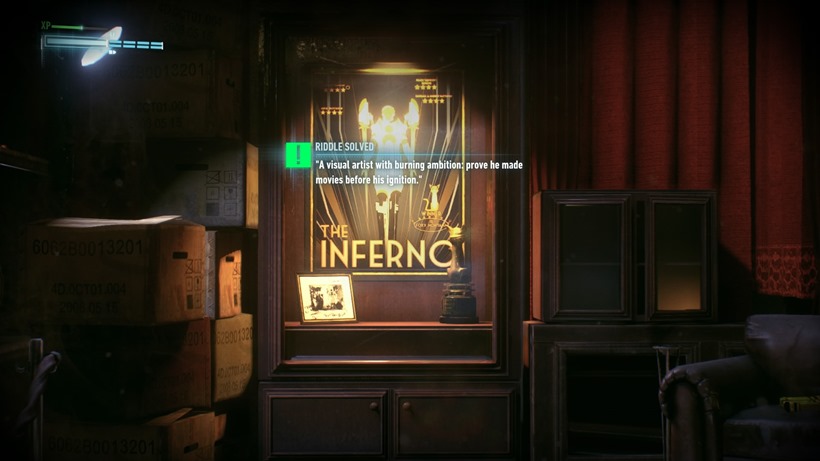 On Stage A, scan the Inferno poster on the wall in the room that is through the double doors on your right.

A psychotic doctor who caught the fear bug, the fruits of his research: a powerful drug.

Scan the toxic green gas wafting in the midle section of the Arkham Knight headquarters.

Vengeance burns darkly inside the betrayed, as they stare at reminders of debts unpaid.

Scan the noticeboard full of pictures, near the previous Riddle.

With a fluffy white coat and ears standing tall, what burrowed the hole in which Alice did fall?

Inside the big ventilation shaft with the massive fan, look down and scan the central section of this region. 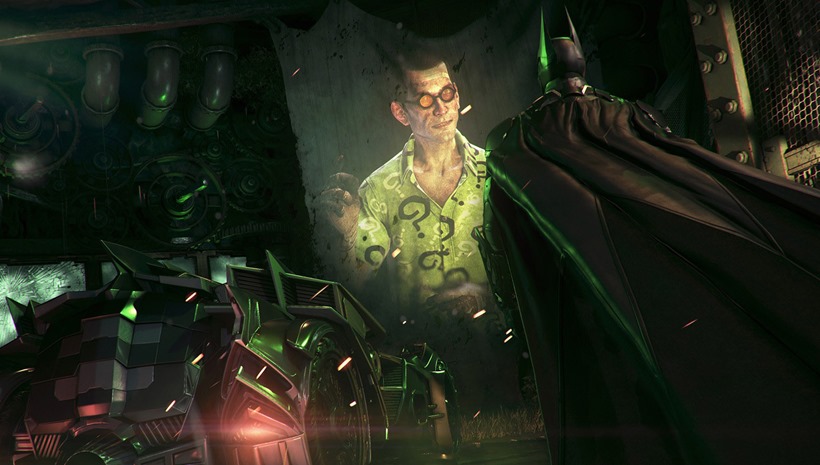 A psycho killer’s grim design, what has an angle but just one line?

At the docks on the northern side of the island, go west of the Trade House. One of the small warehouses has three frozen fishermen. Scan them.

A million dollar home for a spoilt child, his parents are dead but his parties are wild.

Climb up high on Wayne Plaza, and zoom in on the mansion in the West. Scan it in.

He saved the date! All Hallow’s Eve! But this calendar killer too his leave.

Go the underground section in Drescher, past a bright poster and grapnel up to enter a room with a desk and a calendar in it. Scan it.

He lives and dies in seven days, this beast you’ve teamed but his song still plays.

In the underground passage near the church, go to where the militia base is. Crawl through the opening, creep around the guardsmen using the ledges and go through the door. Scan the Solomon Grundy shrine.

Roll up! Roll up! For the circus of the strange, this porcine professor is clearly deranged.

Go inside Pretty Dolls Parlor, run through the two doors at the rear and head then downstairs. Go through a long corridor until you’re in the chamber and scan the poster on the wall behind you.

An ancient order, lust for power consumed, their patron saint is here entombed.

Search the wall for the name of St Dumas in the cemetery on Founder’s Island.

This tumbledown ruin’s not looking its best, what do you expect from the Penguin’s old nest?

Scan the Cobblepot Manor in the Otisburg section.

Far away the deflated brute roams, leaving behind what he couldn’t ship home.

In Port Adams,scan the opened container in the bottom-left section of the area.

Crusaders of old had a trusty steed. How much horsepower does a Dark Knight need?