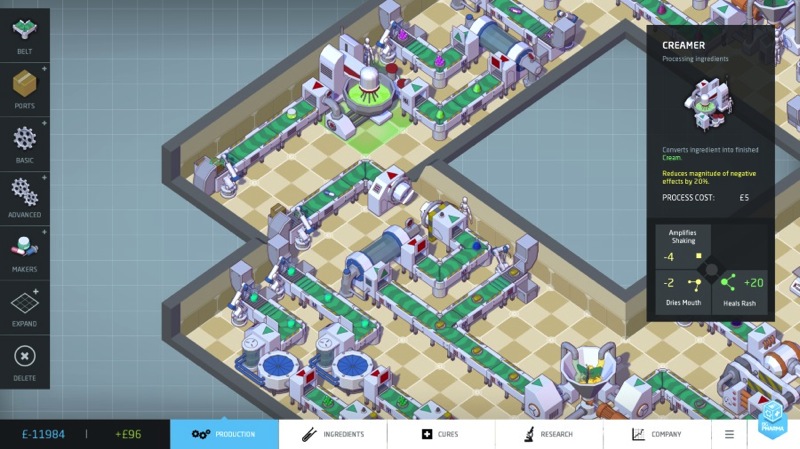 There are so many random management sim games out there. Goat Simulator, Rock Simulator and Farm Simulator are ridiculously popular, and hilarious. Now there’s a new sim game in town. It doesn’t quite replicate Breaking Bad, but it might raise some eyebrows.

Building on the idea of a Tycoon game, Big Pharma (thanks PC Gamer) sees you playing through the usual loop:

Buy ingredients, process and combine them in meticulously designed production lines, convert them into finished pills, creams, syringes and more, and finally sell them for a profit.

Spend your hard earned cash to research new machines and technology that will improve the efficiency of your production lines. Up your expedition spending to discover new ingredients containing new active compounds and combine them to create higher value, even fancier medicine.

However, there’s more to it. Seasons play a role, with cold and flu meds selling well in winter but leaving you high and dry in summer. There are also competitors on the market, so you’d better patent your drugs or you might find that your profits fall when supply rises too high.

The pharmaceutical industry is generally viewed as evil and corrupt, so why not explore that aspect, too?

Another subtlety of the pharmaceutical industry I’m looking to explore is the fact that the most important cures aren’t necessarily the ones that will make a lot of profit. Cures that pander towards the whims of western countries will normally be able to sustain higher prices while the vaccine that is urgently needed by millions of people in developing nations won’t sell for more than a few pennies each. If you only had space on your factory floor for one, which would you produce?

Such a weird and wonderful concept. I like that it’s using the opportunity to look at the darker side of the industry. Now to see if someone will make EFF simulator or WTO negotiations simulator. I keep wondering what strange and fabulous simulators they’ll come up with next, and somehow developers never fail to surprise me.