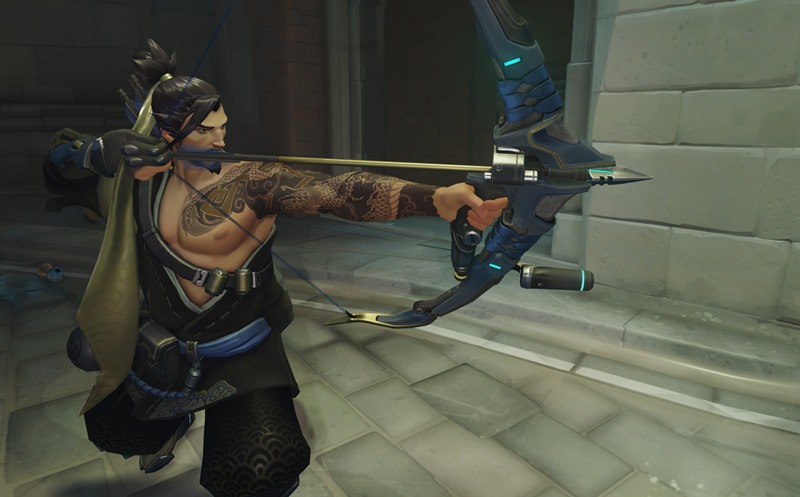 Overwatch has been getting a bunch of sudden attention over the past month. Just last week Blizzard showed off the game’s gunslinger, Jesse, and the week before that we got to see Zenyatta, the robotic monk. Now we’re getting a taste of the resident bowman, Hanzo, compliments of brand new gameplay footage.

Let’s first take a look at Hanzo and what he can do (via Blizzard):

Hanzo nocks and fires an arrow at his target.

Hanzo launches an arrow that contains a sonar tracking device. Any enemy within its detection radius is visibly marked, making them easier for Hanzo and his allies to hunt down.

Hanzo shoots a fragmenting arrow that ricochets off walls and objects and can strike multiple targets at once.

Hanzo summons a Spirit Dragon which travels through the air in a line. It passes through walls in its way, devouring any enemies it encounters.

Now let’s check him in action (via PC Gamer):

Master bowman Hanzo takes aim against his foes in this complete, unedited match from an early version of Overwatch, captured in 60fps on PC. Here, Hanzo is on the attack in King’s Row, a Point Capture/Payload hybrid map situated in the heart of England.

If I could liken him to anything, I’d say he is the lovechild of the Scout and Sniper from Team Fortress 2. As you can see, he’s a nimble fellow, capable of climbing walls and firing off shots in super quick succession – assuming he isn’t drawing the arrow back longer for maximum damage and distance. He also seems to have more ammunition in his quiver than Hawkeye (basically infinite).

What I really like is his Scatter Arrow ability. See, my reflexes have grown poor with age, meaning I probably wouldn’t hit a damned thing on a normal day. A fragmenting arrow though? That multiplies my odds of killing stuff quite significantly. That or I can rely on his Dragonstrike which seems to guarantee a kill or five.

Blizzard’s Team Fortress 2 Overwatch is shaping up nicely. When will it release? That’s anybody’s guess. In the meantime though, you can apply for the beta right here.

Are you excited for the game? I’m still in two minds, although I will admit I could do with a new FPS in my life.