Home Gaming Bluehole is sick of hearing that PUBG is broken, so they launched a website 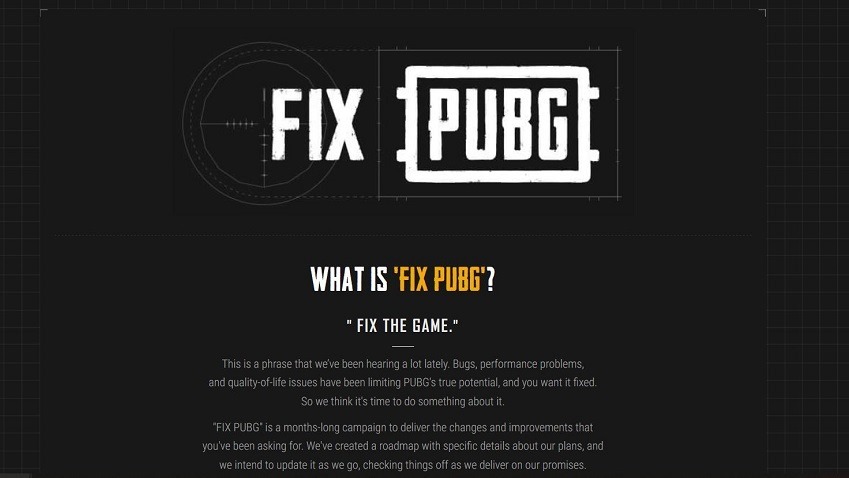 PlayerUnknown’s Battlegrounds was the Battle Royale shooter of 2017, but it’s had its party crashed and cake eaten by Epic’s Fortnite this year in a way that few were expecting. There are two very clear reasons why though. Epic has understood Fortnite as a live game in a much better, more fun way than PUBG, offering so much new content at a rapid pace that it’s tough to keep up. But Fortnite also just runs better – which can’t be said for PUBG at all. The game is still in rough shape, with frequent performance issues, server issues and crashes. And that’s not even talking about the horrible Xbox One port. Bluehole is so sick of hearing it though, that they’re finally doing something about it.

There’s something to be said about Bluehole only really making a big push for this now (imagine what it could’ve been like in January), but it’s good to see some transparency on their part. In response to frequent complaints about the game’s performance, Bluehole has launched “Fix PUBG”. It’s a self-contained website that gives players a clear view of the current development roadmap, which includes specific details on when they can expect fixes for many of the game’s issues. This isn’t about new content, it’s just about fixing the content that’s already there. Which should be music to remaining player’s ears.

Because PUBG isn’t suddenly struggling to survive. It’s still the number one played game on Steam at the moment, with over a million players active in the last 24 hours. But its numbers are dwindling. That figure is still around a third of what it was at the beginning of the year, which is around the time Fortnite started making a play in a big way. Bluehole can certainly still fit into this market without losing everything to Fortnite, but it needs to fix the persistent issues its fans keep asking about. And with roadmaps stretching into the remaining months of the year, there’s evidence that they are certainly giving it a shot.

I don’t know if a more stable experience is enough for me to come back to PUBG (it still has massive issues with the way it monetizes itself), but it will do wonders for the dedicated fanbase that still follows it. It’s a mystery as to why it took Bluehole so long to really get into gear, but at the very least you can’t blame them for not trying now.