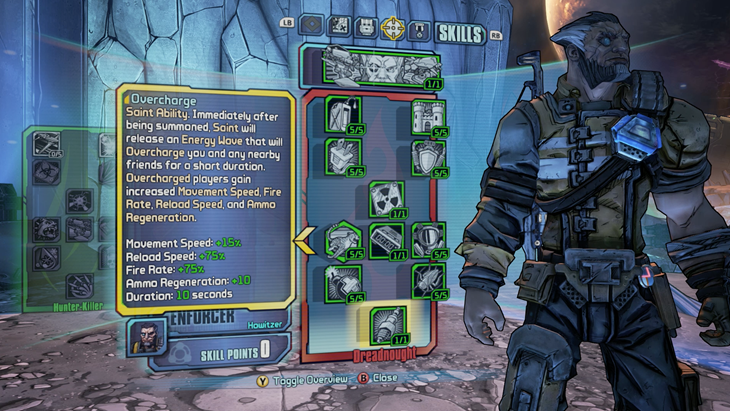 There’re a few people who are under the impression that Borderlands: The Pre-Sequel is DLC being packaged and sold as a full game. Sure, there isn’t the same quantum leap that we saw with Borderlands 2, but considering there’s a new setting, new weapons and four new characters to play around with, it’s a little more than DLC. We’ve already seen Captain America Athena, so now 2K turns their attention to Wilhelm.

Borderlands 2 fans will recognise the name, but maybe not the character. Wilhelm was one of the first bosses in the previous Borderlands title. A hulking robot that acted as one of Handsome Jack’s most loyal enforcers looks very different in the Pre-Sequel. For starters, he’s very human in comparison to the Wilhelm we know, and the Pre-Sequel will document his transformation – not through narrative, but through actual gameplay.

The fairly long gameplay demo from San Diego Comic-Con shows how all the upgrades in Wilhelm’s skill trees slowly start changing him from man to machine. Wilhelm’s action skill allows him to throw out two support drones, named Wolf and Saint respectively. One does damage while the other provides health and shield regeneration, The three skill trees Wilhelm has offer bonuses to him and his drones. The Hunter tree buffs both damage for both Wilhelm and Wolf, Cyber Commando will allow you to start physically changing Wilhelm into the robot he was in Borderlands 2. The Dreadnaught tree is probably best for those planning to play Wilhelm solo, with buffs to Saint’s healing and an overall increase in how many hits Wilhelm can take before he falls.

The gameplay shows off the two drones in action, as well as some new weapons and more awesome low-gravity kills, which is one of the biggest additions to the Pre-Sequel. It’s shaping up quite nicely, and it looks like more of the same Borderlands fun that the series has always delivered. No reason to get too worried I think.