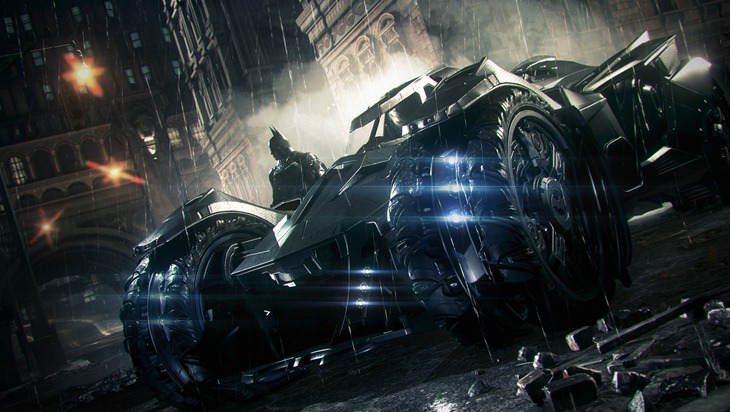 I’m pretty excited for a new Batman game. Hell, I’d pay top dollar for a new Rocksteady game that featured nothing but new visuals and extra ass-kickery from the darkest of knights. But Arkham Knight won’t just be a grand finale to the work that Rocksteady have created. It’ll be an evolution of the Batman, making him the apex predator that he was meant to be.

At an event in San Francisco, Rocksteady revealed a ton of new details about the game. First off though, was a new look at the Arkham Knight himself, a vigilante that operates without the code of honour that the Dark Knight adheres to. 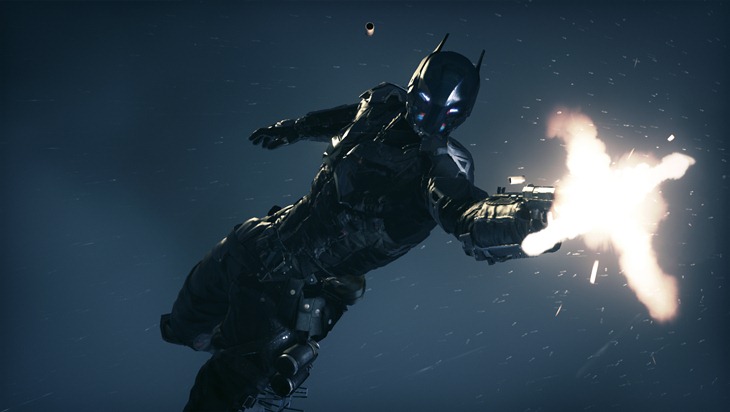 “The opportunity is exciting, but the expectation [from fans] is off the scale,” Rocksteady producer Dax Ginn said to VG247 about the Arkham Knight. “That’s why working with DC is so awesome for us, because those guys are so experienced, and it’s obviously something they do a lot of.

So when the idea was on the table for us to develop our own character and introduce that into Batman’s world, there was so much energy and excitement around it at Rocksteady – but we really were conscious of the value of the collaboration creatively we have with DC to make sure the gameplay role the Arkham Knight has is really reflected in his appearance and his outlook and his perspective.

That’s not an opportunity that comes along very often, and I think we totally nailed it with this guy. 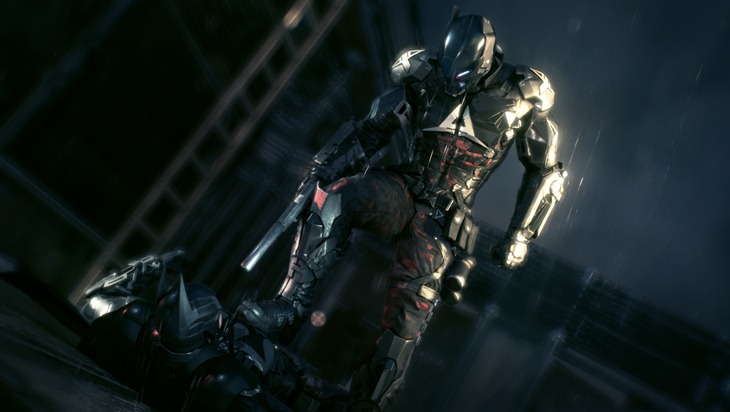 Beyond the new villain however, the caped crusader is getting an updated combat system. As Dax explained to Kotaku during a live demonstration, the freefight system has evolved into a more brutal beast:

We’ve expanded the freefight combat system. Brand new moves. brand new techniques for Batman to use. He’s disarming this guy. He’s taking that baseball bat and he’s using it against his mates.

Weapon-steal is a brand-new feature of freeplay combat. He can use that as long as he wants or until it smashes on the face of some poor dude. Sweet moves! That guy is going to try to take Batman down. Gaz took him out with a bat and a throw counter and—YES! This is a sweet combination of moves, man. A sweet combo. 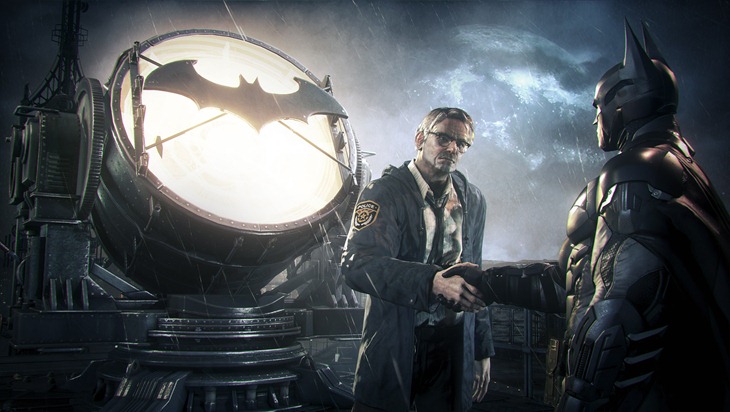 This evolution also extends to Batman’s gliding capabilities, which in addition to allowing him to now do 180 degree turns while in the air, will also see the world’s greatest detective use his gadgets while airborne:

So gliding obviously an immense part of Batman’s navigation in Arkham City. In Arkham Knight, we’ve introduced a brand new concept: gadgets while gliding. GWG, we call it. So, at any time, you can deploy the line launcher to give us a perch 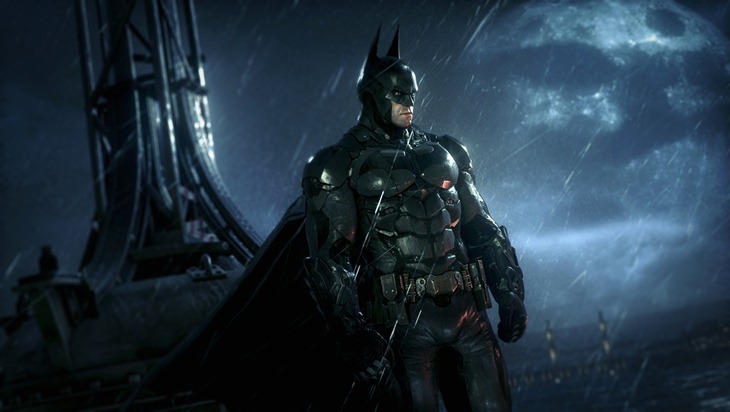 But most important of all in Arkham Knight, as my inner child squeals with joy, is the Batmobile. You’ll have access to that vehicle at any time. And it sounds like a proper beast:

So we have designed this in collaboration with DC Comics. An incredible honor. What an amazing opportunity to design your own Batmobile, something that the studio has been incredibly focused on, giving it a lot of energy, and you’re going to see a lot of incredible features from this vehicle as it augments Batman’s abilities in every possible way. Number one, we’ve got to light some tires, hit the afterburner and we are off.

As you’d expect, the Batmobile comes fully equipped with gadgetry as well. Gaz is going to use immobilizer rockets, a non-lethal vehicle takedown to take this vehicle down and interrogate the driver. Opening shot. Nice! Good damage. 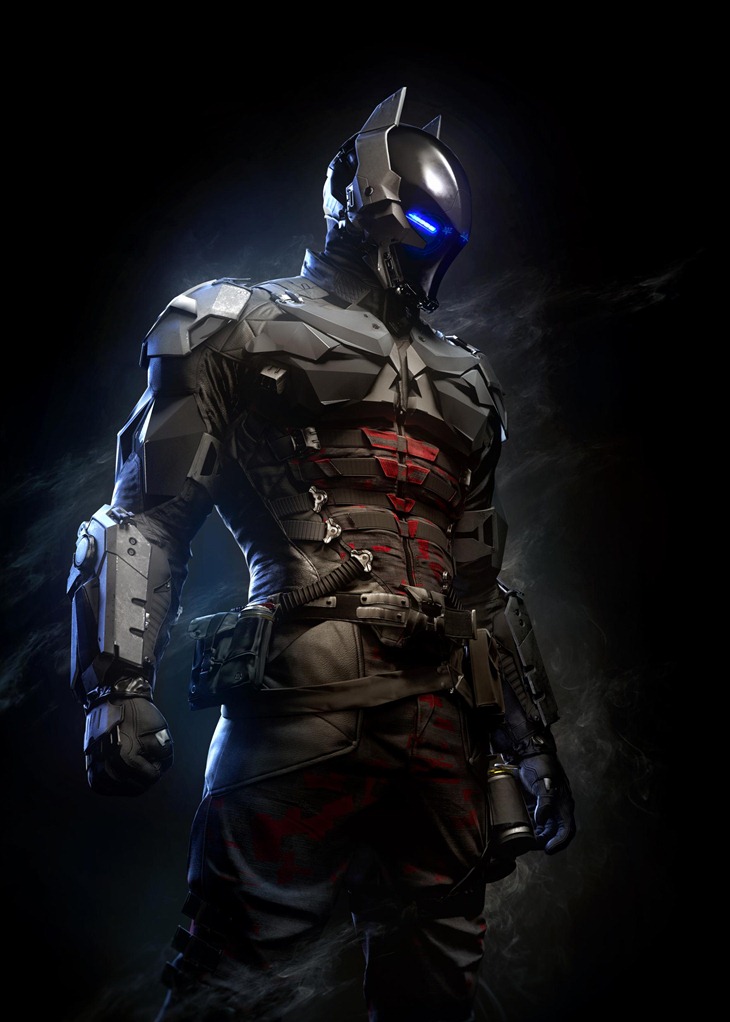 We poured all of our heart and soul into this and put the Batmobile in the epicenter of Arkham Knight. But what’s the Batmobile without the entirety of Gotham City to drive through and destroy the way that Gaz has done? But number three, that power fantasy of being Batman in this, the epic conclusion that we have created to the Rocksteady Arkhamtrilogy.

All of those considerations have been the things we’ve been driving towards ever sinceArkham Asylum. The promise of being the Batman is always what we’ve been all about. The power fantasy of being the Dark Knight. In his city. Being in complete control.

So, having said that, Batman should be able to walk out of that door and walk into the streets of the city that he protects without a worry in the world. 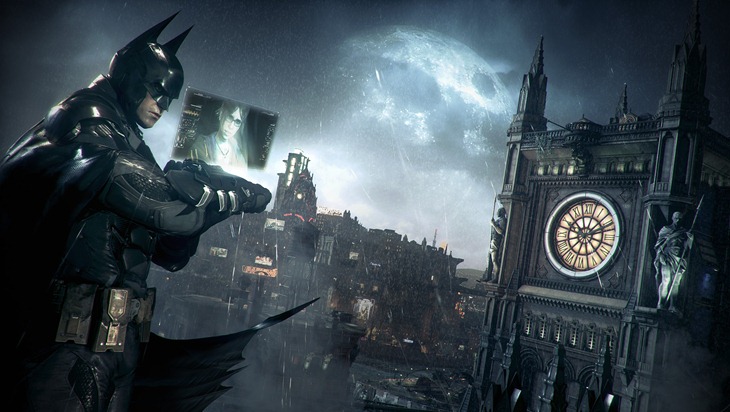 Arkham Knight is out in October, for PC and new-gen systems only. And yes, I have multiple bats in my mental belfry about this game already.