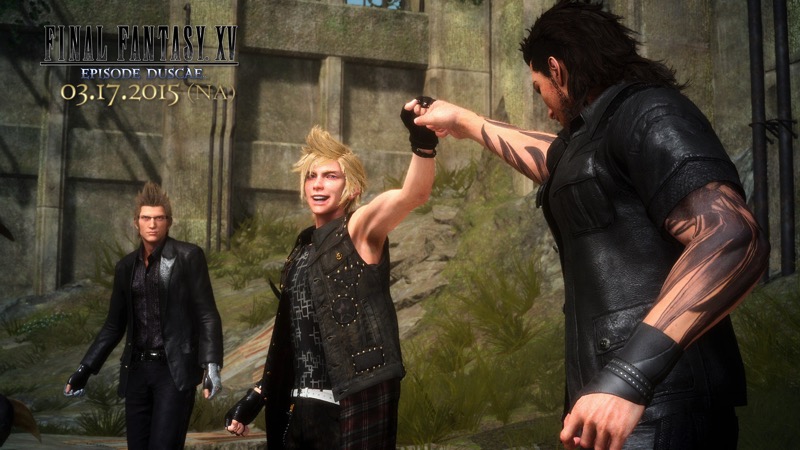 Final Fantasy XV has some really cool elements and I’m excited to explore them beyond what we’ve seen in the demo. However, I’m not totally convinced on the cast of characters – they just didn’t grab me in Episode Duscae. While it could be down to some bland character designs, or the demo not showing off the depth of personalities, it might also be a gender gap. At least this is one way I can get a deeper understanding of bromance.

Speaking to Gamespot, game director Hajime Tabata explained that the all male party is meant to make the game feel more accessible.

Speaking honestly, an all-male party feels almost more approachable for players. Even the presence of one female in the group will change their behaviour, so that they’ll act differently. So to give the most natural feeling, to make them feel sincere and honest, having them all the same gender made sense in that way.
The world might be ready to see the curtain lifted on what boys do when girls aren’t around, when they come out of the tent all prim and proper. That’s kind of the idea behind it… we think, male or female player, that everyone will feel a certain connection and bond with the four characters.

Final Fantasy has traditionally had a ton of strong female characters, so I’m not about to write off the whole franchise because this installment chooses to focus on male trust, friendship and camaraderie. Intimacy between men is still a real and important thing – no, not in a sexualized context, but the fact that men can be close and form a brotherhood. It’s something that’s been integral to society since the dawn of, um, man. I just hope that these characters are expanded upon and aren’t like the Hobbit movies with a bunch of undifferentiated dwarves.

Bromance may be a central theme in Final Fantasy XV, but it is rather unfortunate for them that their timing is so close to a big push for female representation in games. Still, it is a Japanese RPG and will get away with sexualized depictions of women – hey, at least she’s a top notch mechanic, right? And if you start to forget about empowered women in Final Fantasy games, just go back and play… any of them. I’m excited to see how this develops and hope that the characters expand outside of the demo – while it has a massive scope for a demo, it still won’t touch the scale of the final game. At least, that’s what I’m hoping.