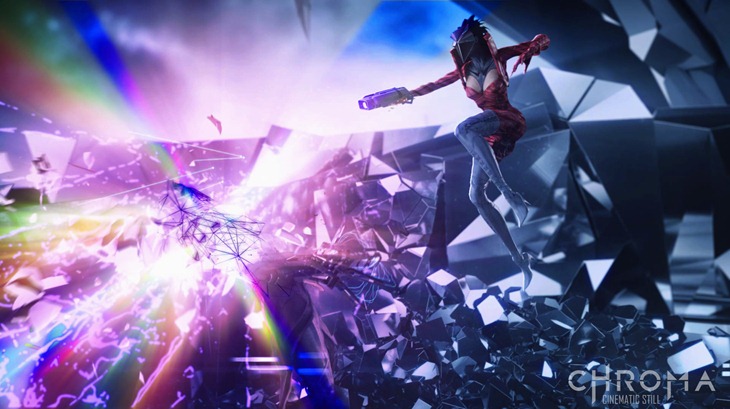 When it comes to music games, Harmonix is pretty much at the top of that game genre. From Guitar Hero through to the upcoming Disney Fantasia, these folks know how to develop a few tunes. So what happens when you take all that experience and mix it up in a new genre? You get Chroma, a musical FPS.

The upcoming PC game will be a multiplayer shooter, where the arena is home to weapons of wub wub destruction. According to AGB, here’s the low down on the musical features of the game:

Music is your weapon – Unleash streams of sound and music with your arsenal and bring the musical landscape to life in battle! From deep wobbling bass to the crunch of an electric guitar, crushing metal drums to poppy synths, choose a weapon load-out that reflects your musical tastes and personal style and take your sounds into battle.

Band together – Your team is your band: Join up with your friends and battle for glory.. Master multiple classes, each with their own unique musical gameplay mechanics and perks, and lead your team to victory.

Conquer shifting terrain – “Change Ups” at major musical moments dramatically alter the landscape of the battlefield in real time both physically and strategically, raising sniper towers, adding cover, and more in sync with the music.

Free-to-play, but not “pay-to-win” – Free to jump in and play with deep customization, but smartly designed to preserve a fun and fair experience for all players.

According to Destructoid, each side has their own music running throughout a game, with the winning team blasting their beats the loudest. The goal here, is to overpower the enemy music, while changes in tunes and tempo will actually alter the environment itself.

Weapons also tie into this as the correct firing of these guns, when in tune with the music, results in bonus damage.

It’s an interesting idea, I’ll give them that. But I really hope that it’s more than a dubstep shooter like the trailer let’s on. Harmonix will develop Chroma in conjunction with Hidden Path, with that second studio coordinating the combat side of gameplay. Harmonix naturally, spins the tunes.