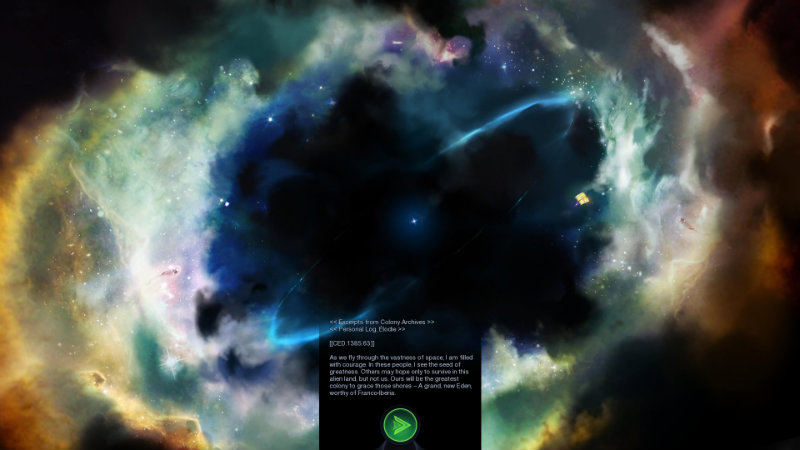 When Firaxis announced Civilization: Beyond Earth, it got many fans excited. Players imagined the addictive, replayable nature of previous Civilization games combined with the unknown of science fiction and outer space. Could Beyond Earth live up to expectations? Well, mostly yes.

The premise of the game is fairly straight forward. Our civilization ruined Earth. It’s not made entirely clear what happened, and depending on how you play the game you might find particular hints to give credence to one idea or another. However, no matter what happened on Earth, it’s now up to you to forge a new civilization on a totally foreign planet. The game follows the same turn-based systems as previous Civ games and has similar units to what you might expect – there are the same starting explorers, workers and even weakling soldiers. Space travel apparently also makes us lose some of our technical know-how and military strength. Not worry, these will all be rebuilt in new ways on our new world. 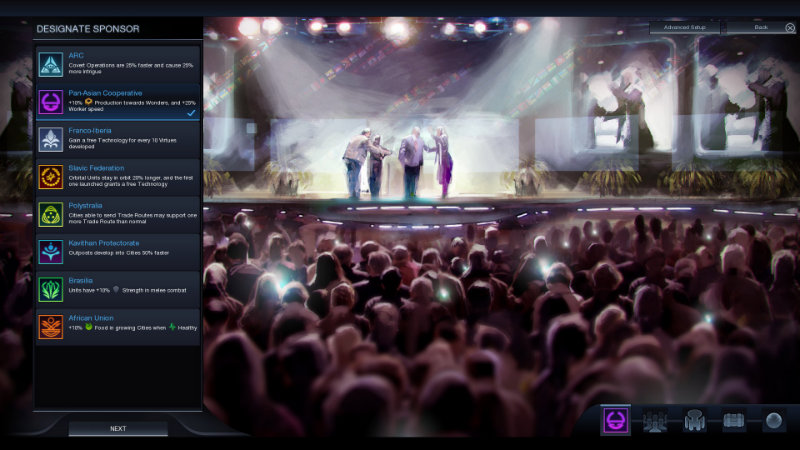 Before the game begins, you can set up your game by choosing your starting civilization, which cargo, passengers and tech you bring along. Of course, you might plan on playing an awesome culture and research game only to find that you need more military might because you’re surrounded by alien nests. Alternatively, you might arrive on the planet with more military strength only to find that you are all alone and free to roam and explore without any danger. Your starting choices will certainly impact the beginning parts of the game as they assist you in managing health, wealth and knowledge.

I find the early part of the game to be rather difficult depending on your starting environment. With only early technology, the aliens seem incredibly over powered. Once you start researching and gaining affinity upgrades, they become easy to destroy, but in those starting 50 turns players can easily be overwhelmed by the alien nests and siege worms. 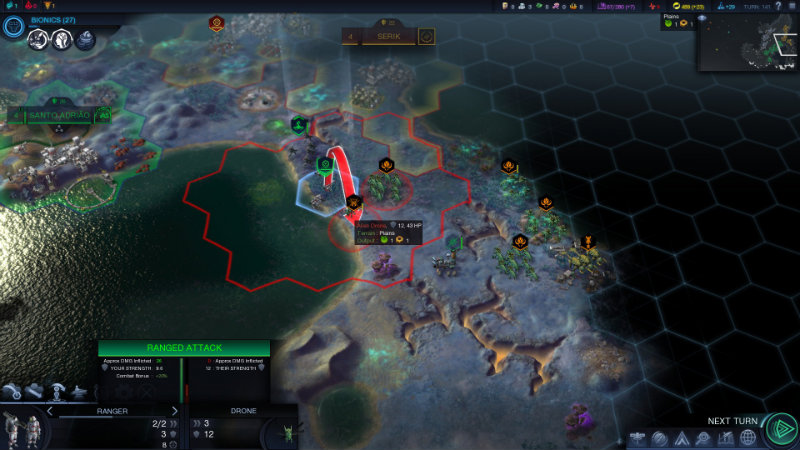 Affinities and Virtues are incredibly important in Civilization: Beyond Earth. Affinities are divided into Purity, Harmony and Supremacy. Each one has its own view on how humanity should advance in the new civilization. Purity wants to keep humans as they were and bring those we left behind on Earth to join us on our new planet while Harmony wants to incorporate alien life into our own so that we can improve ourselves going forward. Supremacy is also oriented towards improving ourselves, but this affinity is geared towards cybernetic advancement to ensure that we can live on any planet without difficult. Each of these affinities have direct impacts on the game – from victory conditions to military upgrades and buildings, everything links back to affinity.

When I initially started playing, I thought that I would focus on only one affinity. However, each one has various benefits. I now tend to push for an initial point in Purity early on in the game so that my explorers can see the world without threats from the alien life forms. After that, I decide if I want to carry on with that affinity or pursue Harmony or Supremacy. 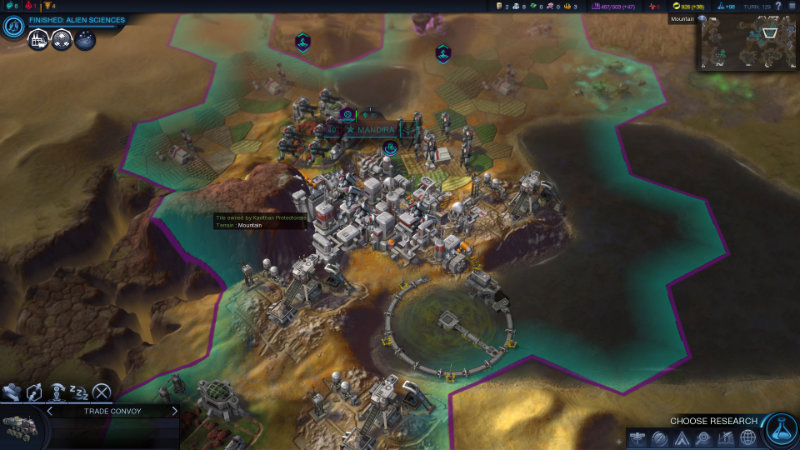 Virtues are similar to the social policies of Civilization V, but with a far greater impact. They are awarded when your civilization gains enough culture, with each successive virtue costing an increasing amount of culture. Beyond awarding free workers or colonists, virtues can also improve production times, science and health. Depending on your environment and play style, you may find certain virtue trees more useful; I totally ignored the military tree until I found upgrades that actually improved my health, something that seems to get out of hand far too quickly in Civilization: Beyond Earth.

An excellent difference between virtues and social policies is that virtues have vertical and horizontal rewards. Grabbing all the tier one virtues across the various trees will still yield excellent rewards and bonuses. This means that you can find the balance between production, research or growth without sacrificing long-term rewards.

Completely new in the series is the tech web. I thought that technology would just be a way to get new units, buildings and wonders. However, it’s also the main way to get affinity points. While main research topics like genetics or robotics are affinity agnostic, the sub-technologies are linked directly to the particular affinities, granting you affinity points and bonuses as well as affinity specific building options. 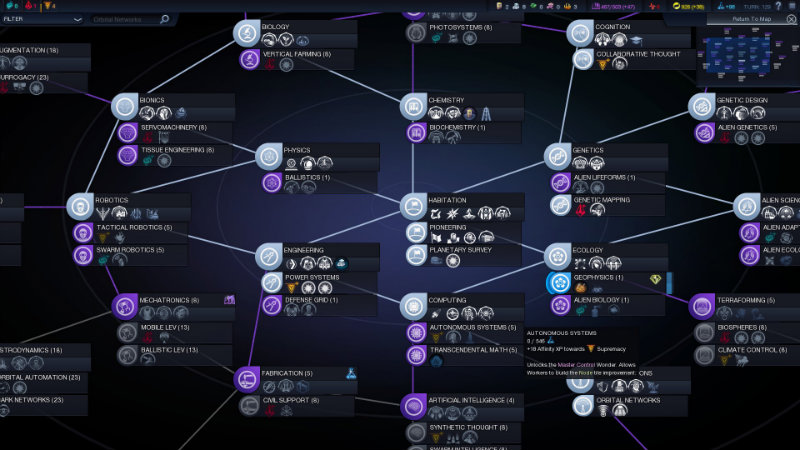 While the technologies may be confusing at first, it becomes easier over time as you learn which buildings, passive abilities and resources your particular civilization requires. It also becomes clear overtime that rushing for particular high level technology isn’t worthwhile – you will require various lower level tech in order to make use of the high-end knowledge. For example, pushing for the various research required for affinity-based victories is useless until your affinity level is high enough to actually build the final wonder required for victory. This means you have to take a more well-rounded approach to the game.

However, this means that while the early game is incredibly difficult, the end game feels like turn counting until the end. The guys at Firaxis had explained that they loved the science victory in Civilization games because it was a multifaceted victory. In Beyond Earth, the victory conditions can include building a massive warp gate and then sending units through (or summoning them to your planet) to eventually achieve victory. Unfortunately, before you can build the warp gate, you already need to pursue some high level technology and gain a minimum of 13 affinity points towards the necessary affinity (no easy task). This means that by the time you are actually in the final push towards victory, you already have all the major technology that you wanted, and you are just biding your time until you get your achievement for winning the game. It takes the challenge out of the endgame, making it feel drawn out. Of course, if you are racing another civilization for victory, this can add to the suspense. 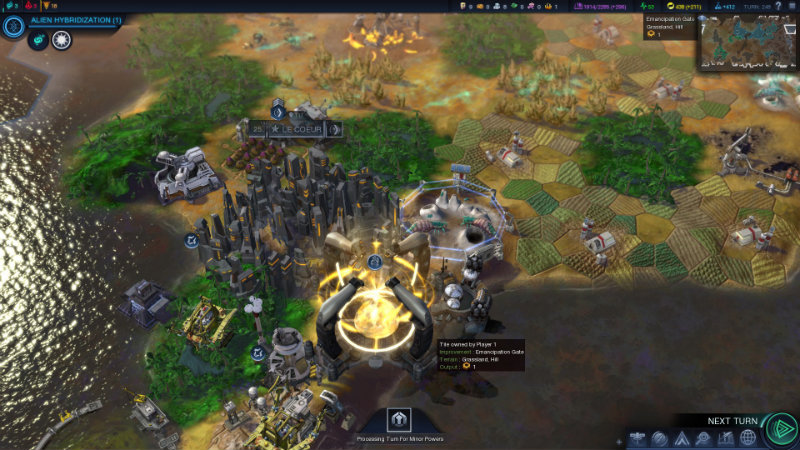 Speaking of achievements, there are far fewer achievements for Civilization: Beyond Earth than for previous Civilization games. With 64 Steam achievements for the game, it simply doesn’t take as long to pick up a handful; I wonder if this will affect the longevity of the game. I know I sunk hundreds of hours into Civilization V and I’m still nowhere near 100% for that game. Meanwhile, just from playing as much as I could during the embargo period I’ve already grabbed 45% of the achievements. I play these games because I enjoy them, but it might lose some replay value once I’ve garnered all 64 achievements.

Espionage and trade are much more nuanced in Civilization: Beyond Earth than in previous Civilization games. You can send trade convoys and vessels across the planet to boost energy, science and even culture and diplomacy. However, these can also be destroyed by alien life. Spies can be recruited and sent into foreign cities to siphon energy (the game’s currency), science or technology. Once a high enough level, your spies can even cause a coup or sabotage, taking over the foreign city – an ideal way to claim your enemy’s capital.

Also all new in this Civilization is the quest system. Unlike previous Civ games that used history to give the game context, Beyond Earth uses a quest system. Some quests are linked to your eventual victory as you make decisions about what to do with aggressive vegetation or wandering refugees as per your affinity. Other quests are more straight forward, involving basic espionage, killing aliens or conducting expeditions with explorers. All this helps to build your unique story of your future civilization – the choices you make can give context to how your world develops. 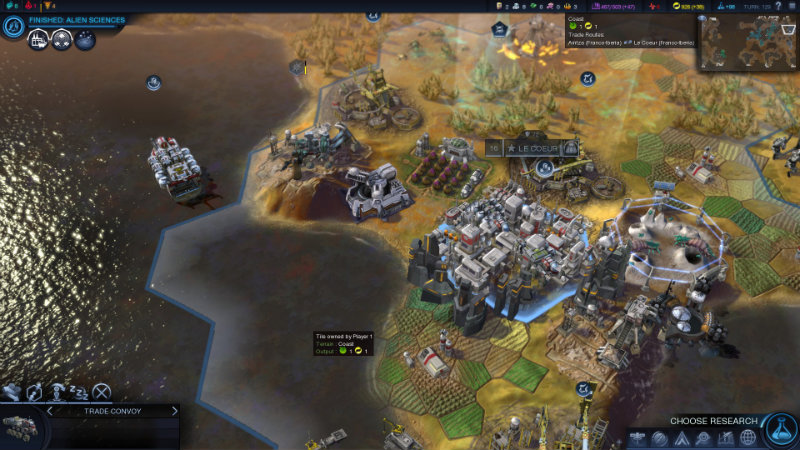 Civilization: Beyond Earth certainly takes some adjustment. It’s almost nothing like Civilization V, and your usual strategies and approaches probably won’t be successful. However, once you come to understand the tools at your disposal you become totally invested in your civilization. Hours disappear as you motor through turn after turn, developing your perfect future civilization and taking over the new world.

Beyond the deep strategy and all new mechanics, the game also looks gorgeous. With excellent textures, various biomes and creative unit design, the game is a joy to look at as you progress from turn to turn. It’s particularly enjoyable to watch your city and units change design as your affinity progresses. With engaging (yet not distracting) music, the aesthetics of the game come together beautifully.