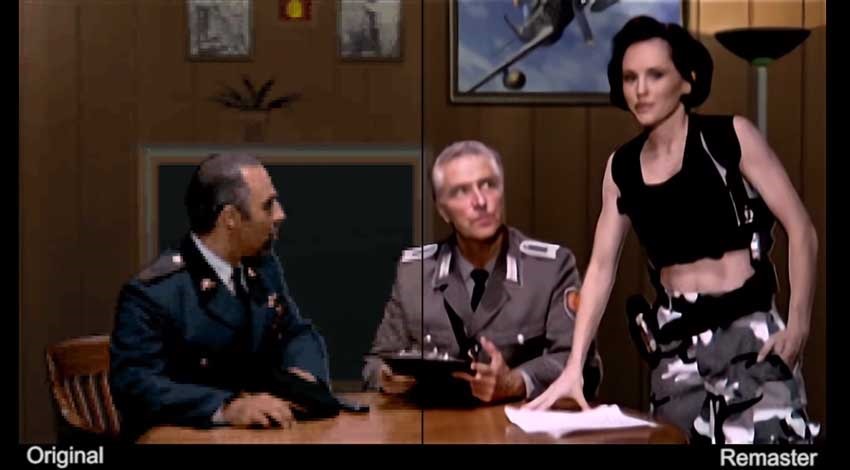 If you ever wanted to feel old as hell, mentioning how Full-Motion Video in the video games of your youth will pretty much get you heckled into a grave by the youth of today. Back in the day, there was nothing more amazing than seeing actual video of actors in all their glorious Hollywood flesh, inserted into a game and used to tell a story.

Plenty of point ‘n clicks did just that, but Command & Conquer was king of the FMV for its use not only between missions but within games as well. You’d be building a base, and lo and behold you’d get the equivalent of a Skype video call in your dashboard to give you an update on the battlefield. But like with zero lag, because THE FUTURE.

Those FMVs may have aged like the cheese in the acting within them, but they’re nevertheless still the best part about Command &Conquer. After all, imagine life without Tim Curry going…TO SPA-ACE!

So how will cutscenes from a much older and 4:3ish resolution be used in Command & Conquer Remastered? According to Petroglyph Games, it wasn’t easy. Producer Jim Vessella managed to track the original footage down to their location in the EA Los Angeles vault (which saved the content from being literally thrown away), and threw cash at a Hollywood company to bring those original tapes and digitise the into a modern format. Only problem? The company that did the job kept the footage at its original 320 x 240 resolution.

In their darkest FMV hour, Petroglyph turned to the Command & Conquer fan community to make use of their homebrew algorithms which would be used to give the original footage a proper upgrade. Combined with the console version FMVs, the end result is pretty impressive! The roriginal PlayStation version of Command & Conquer didn’t have every FMV included so there may be some differences in the remaster, but the game will have all of the footage and bonus B-roll video that’ll be available as unlockable content.