Home Gaming Compassion won’t get you very far in Vampyr I think I could adjust to being a vampire very quickly. Never enjoying a sunny day again would be a bummer, but then again I already hiss at the sun every morning when I wake up because NATURALY LIGHT! GAAAAAAH! Giving up garlic? Well, I wouldn’t mind people recoiling in disgust whenever I approach them after gorging myself on the stuff, so maybe that would be an incentive to change my diet.

Hell, I’d probably thrive on needing to have some blood every now and again, on account of the fact that I spent my last shred of compassion on kitten videos. Great for me, terrible for anyone else who actually has a remnant of humanity within them that puts them at odds with their new bloodthirsty nature. That’s the dilemma that faces Vampyr’s protagonist Dr Jonathan Reid, who finds himself torn between his hunger for blood and upholding his hippopotamus Hippocratic oath.

The only catch here? Compassion won’t get you very far in Vampyr. “Due to one of our core gameplay mechanics, it will be far more difficult to play as a compassionate vampire,” director Stephane Beauverger said to Well Played. 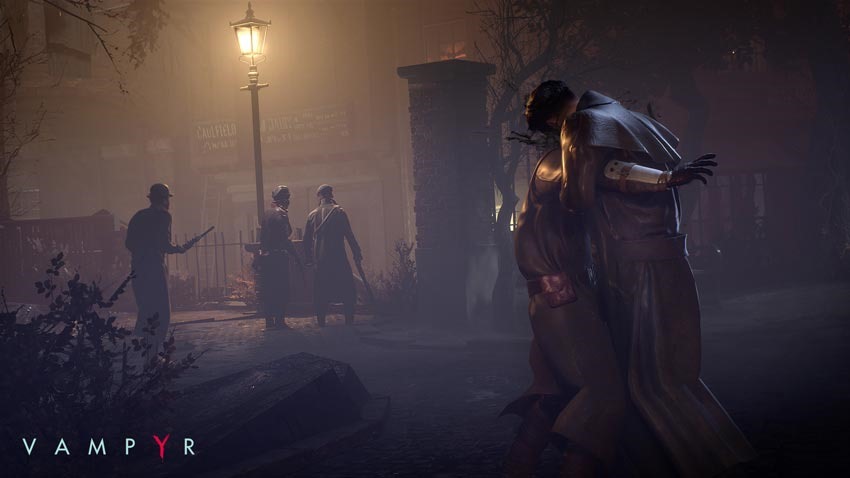 the game incites you to drink blood

To incentivise the player to take lives, the largest source of XP comes from the blood of London’s citizens. This means if you want to level up quickly and more easily defeat your enemies, the game incites you to drink blood. However, when you do this, you alter the delicate balance of London’s districts, already made fragile by the epidemic – you may even lose an entire district of the game (since everybody died, you lose the merchants, the secondary quests, etc.) if you kill too many people, too quickly.

From a vampire’s point of view, blood quality means more or less XP acquired when taking a life. And, because of the Spanish Flu epidemic, all citizens’ health tends to degrade with time. The good thing is that since Jonathan Reid is a doctor, he can craft drugs to enhance his patients’ health. He can even choose to keep his targets healthy before quenching his thirst. But that would be very Machiavellian.

That’s…cruelly fantastic. You’re essentially playing with your food, strengthening your prey and making the most of your kill. Only a monster would take the time to do just that and toy with their supper. Oh hell, I’m that monster aren’t I? Dontnod’s Vampyr is finally out on June 5 for PC, Xbox One and PlayStation 4 in case you feel like being a pain in the neck for London’s favourite citizens.