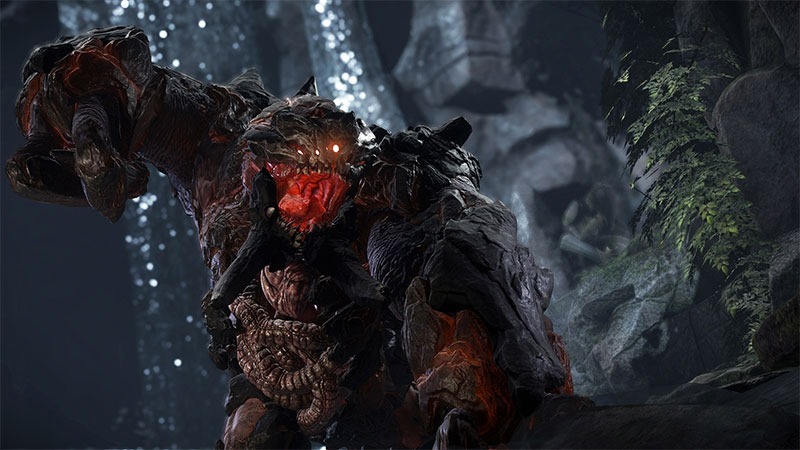 We know already that Evolve is…close to dead. There’s a small, core group of players that keeps at it, but interest in the 4v1 shooter has dropped to embarrassingly low levels. Could some new DLC help bring players back? Probably not, but it’s happening anyway.

Starting at the end of this month – for Xbox players – Evolve will get a wealth of new content including two maps, a new monster and four brand new hunters

The fourth playable monster, The Behemoth, will be coming free to those who foolishly pre-ordered the game to get the Monster Expansion pack. If not, it’ll set you back $15 for the monster content. Hopefully, Behemoth won;t be overpowered like that goddamned sonofableeping Wraith.

The four new hunters are:

Torvald has a Goliath-sized beef with Monsters. Survivor of a Monster attack, Torvald was nearly torn to pieces. Rebuilt into a half-human walking tank, Torvald is heading to Shear with a head full of revenge. Besides cybernetic implants, he’s sporting back-mounted Mortar Cannons. As deadly as those mortar rounds are at a distance, Torvald is straight-up vicious, up close. Toss a Shrapnel Grenade and he peppers a target with weak spots. That’s when you unload rounds from his Autofire Shotgun and rack up some serious bonus damage.

Crow is a bit of a recluse. He actually retired to the unsettled parts of Shear to be left alone – until the Monsters came and screwed everything up. He understands the planet better than most, which makes him perfectly suited as a Trapper. Now, Crow and his trained pet Batray, Gobi, are going to get rid of the Monsters one dome at a time. On command, Gobi flies ahead to scout an area and lets Crow “see” nearby creatures. Gobi flies out a couple hundred meters at most in line-of-sight, eventually finding its way back to its master. Crow’s Stasis Gun has two firing modes: A rapid-fire mode briefly slows down the Monster, but a charged shot will drop a Monster to a crawl for a longer period of time. Then there is his Kinetic Long Rifle. The rapid-fire mode deals lots of damage-per-second, but charge the shot and he is able to punch straight through a Monster’s armor and damage its health. It’s sneaky and vicious. Just like Crow.

A forgotten solider from a forgotten war, Slim is not human – not anymore. His DNA was genetically modified so much that this combat medic resembles some insectoid hybrid. All of Slim’s abilities not only mess with the Monster, he has some unique ways to keep his fellow Hunters in the fight. His primary weapon, the Leech Gun, saps strength from the Monster and that fuels how quickly his Healing Burst reloads. His Healing Burst also happens to have the largest radius compared to all the other Medics. Slim’s Healing drone buzzes around the battlefield, targeting teammates and helping them regenerate health over time. As soon as the Hunter getting healed is attacked, the drone returns to Slim. Of course, the Monster can’t hurt what it can’t find and Slim’s Spore Cloud Launcher masks the scent of the Hunters, giving you the perfect opportunity to get in close.

Sunny goes a long ways back with Abe and Parnell before coming to Shear. (In fact, Sunny was one of the original four Hunters, back when Evolve was first created.) Now the ace pilot, engineer and eternal optimist is coming to help her old squadmates. As support, she’s protecting the team with Shield Drones that will cover nearby teammates and take the hits for the Hunters. In order to help them with a quick escape, Sunny’s Jetpack Booster lets teammates fly further, faster and not run out of juice while in range. All that said, Sunny is perfectly capable of dishing it out. Her Mininuke Grenade Launcher packs more punch in a single projectile than any other hand-wielded weapon in the game.

If you’ve bought the Hunting Pass, they’ll be yours, or you can buy them for $7.50 a piece.

While 2K and Turtle Rock are happy to nickle-and-dime you for characters, as promised maps will be free. The Broken Hill Mine and Broken Hill Foundry, will be coming to all players for free, along with a new Observer game mode.

The maps will be released first on Xbox One at the end of this month, and will come to PC and PS4 on April 30. I don;t imagine any of this will genuinely increase the game’s dwindling user-counts for too long.