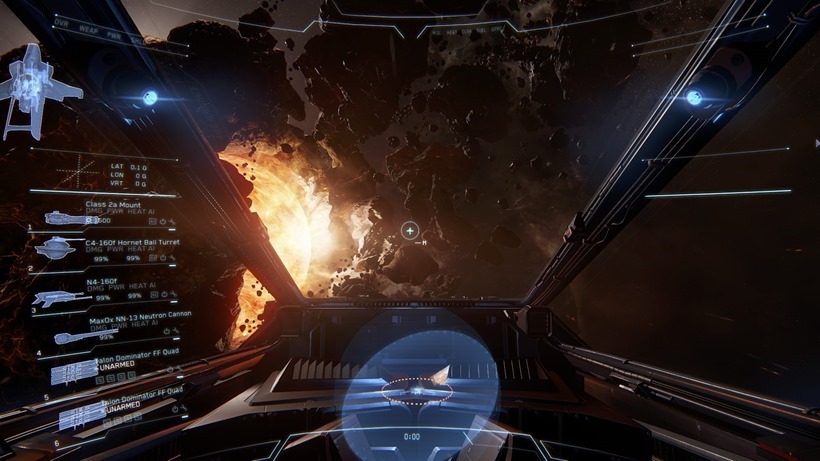 Star Citizen is like the interstellar version of walking on egg shells. It’s so hard to want the promises of the insanely successful crowd-funded title to come true while also looking at the entire project critically. Scepticism exists around the game’s enormous budget and “go big or go home” development attitude, and the studio isn’t taking naysayers kindly.

Or so, that’s what Derek Smart seems to think. The founder of 3000AD, a pseudo-competitor to the entire Star Citizen brand, was recently refunded his $250 Kickstarter backing to the growing space sim – even though he didn’t ask for it. According to Kickstarter’s terms of use, “You can refund individual pledges if you want. After your project has been funded, you can cancel and refund a backer’s pledge at any time. If you do, you have no further obligation to that specific backer, and no agreement exists between you.” Robert Space Industries saw fit to snuff Smart’s involvement in their project, but there are conflicting reasons as to why. 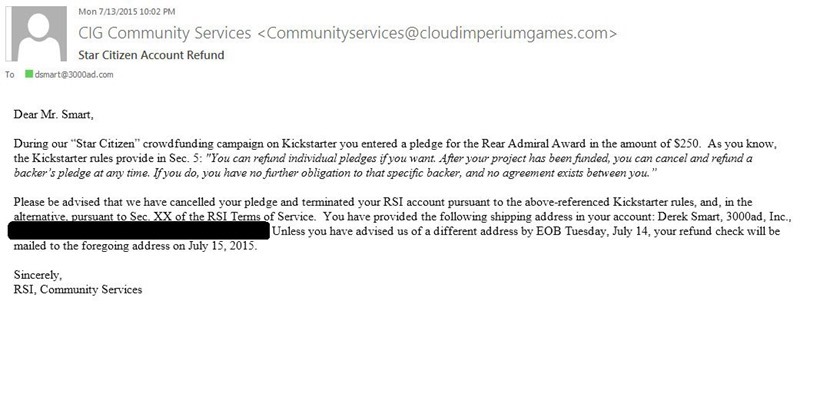 RSI, on one hand, claims that Smart was abusing his forum rights to self-promote his own games – using a furore of negative feedback on Star Citizen to gain traction and increase his volume of listeners. That’s a direct breach of RSI forum rules, as one Cloud Imperium Games representative made so crystal clear.

“We have strict rules about people using our forums and chat for self-promotion and it was clear that he didn’t care about the project, or the backers, or a good game being made. He was just trying to create a huge fuss to make himself relevant at a lot of other people’s expense and distress. So we enacted our rights through Kickstarter (that we also have on our own TOS) and refunded him and turned his account off.”

Smart has been an extremely vocal critic of the direction Star Citizen has gone, even spurring backers to request an FTC investigation into the matter. Smart also claims that his is just the first in a mass Kickstarter recall – stating that RSI is planning to refund the full $2.1 million that they grabbed from Kickstarter backers. That’s a drop in the ocean compared to the $84 million they’ve managed to source from fans since then, but it would give them strict control over how those refunds are then dealt with.

Or, worse yet, how those refund requests are simply ignored.

IF they refund $2.1 in KS backers, the rest who bought directly from RSI website, are screwed by the TOS. Unless they sue or FTC steps in

Smart also fired back at the reasoning RSI provided him for his own refunded, stating that he had never posted on their forums or violated their strict terms of service. There’s no way yet of checking to see if either Smart or RSI is lying, so we’ll have to chalk it up to a “he said, she said” situation for the time being.

But it is yet another blip on a worrying amount of negative news coming from RSI and Cloud Imperium Games in the past few weeks. If they do choose to lock out Kickstarter money – and inherently, their refund policies – RSI has the power to flat out refuse to return any money back to potentially burned backers. That means development on the multi-million dollar game could continue for years upon years, without anyone able to do a damn thing about it.

With two top executives leaving the project in quick succession, modules not part of the original roadmap (despite what RSI claims) being delayed and a growing sense of scope creep, I’d also feel nervous if I threw an extraordinary amount at Star Citizen. Whether is was initial backing or simply ridiculous amounts of money for in-game items that don’t even exist yet, RSI has the potential to lock your credit in and never let go. And that has to be just a little bit frightening, even to the most die-hard fans out there.