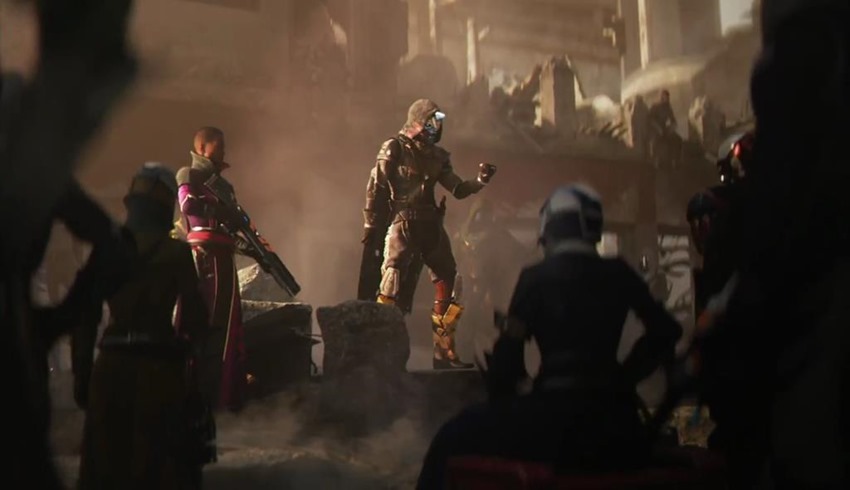 It’s safe to say that I’m a little bit excited for Destiny 2, seeing as how I’m writing this post from a tattoo parlor as I get “CAYDE-6 FOREVA” tattooed on my shoulder. Destiny 2 is big news right now, with developer Bungie setting the stage for their first proper sequel with a trailer last night that was both inspirational and odd. A trailer that had several secrets hidden inside of it. Let’s break it down, much like my tolerance for pain because dammit tattoos hurt and I wish my mom was here to hold my hand. The Last City has certainly seen better days. Even with the threat of the Hive, the Fallen and the Vex, the Last City managed to pull through and establish itself as humanity’s final bastion after the Collapse. Even when the Fallen united most of their major houses for an offensive in the battle of Twilight Gap, humanity managed to repel the invaders.

But we’ve never faced the full might of the Cabal itself. With the various Martian scouting legions in disarray thanks to the Taken War, the Emperor of the Cabal himself has brought the legendary Red Legion to the walls of the Last City, a blitzkrieg that was over before it began. Take a look at the Traveller there, as it may have been able to fend off the powers of the Darkness but even it couldn’t keep the Cabal at bay. Looks the patron saint of the Guardians has taken some massive damage in this invasion. Eviction sucks. Destiny 2’s primary quest isn’t just survival, but reclamation as well as the Titan Vanguard Zavala gathers the few remaining Guardians to his side outside the City. And Xur! It wouldn’t be a Destiny game without everyone’s famous merchant waiting around on weekends to trade Strange Coins for gear. On the other side of the Strange Coin, there’s fan-favourite Hunter Vanguard Cayde-6. Some people like the more flippant attitude of Destiny that emerged post-Taken King. Others think that the franchise doesn’t know what identity it wants to pursue. Why not both? I personally like a game that isn’t afraid to poke fun at itself, as Destiny right now is massively different from the vaguely cryptic title that it was when it first launched.

Point is, as long as Destiny isn’t dull, I’m happy. Hell I even like seeing Guardians without their wicked-cool helmets on. That’s a great way of actually allowing fans and newcomers to attach themselves to these characters, to build a bond. I’m game for that. I’m also hoping that the few Guardians we see, are a key indicator of the kind of armour that we’ll be able to get our hands on. Because dammit, Bungie has some of the sexiest designs ever for their universe. Back to the flashback that was teased earlier in the week, as the Vanguard headquarters is utterly demolished. Which saddens me greatly, because that means that I can no longer dance the night away on that magnificent table. Destiny veterans have faced the Cabal before on the sands of Mars, although it looks like the Red Legion has access to more current military technologies. That energy shield is a new addition, something I reckon that can soak up damage with ease and bounce it back at players with some extra force. Here’s where things get interesting: If everyone starts back at square one, how do you explain the loss of a trio of subclasses unique to each Guardian class? Warlock Vanguard Ikora is making ample use of the Stormcaller ability above, so perhaps these powers aren’t completely lost when Destiny begins. Merely reimagined entirely as you remaster them. I’d wager that the damage done to the Traveller results in a power reset, to explain the back to basics setup. New enemy types! Cabal forces were practically attached to their gun in Destiny, a race of bulky soldiers who were more than happy to shoot first and shoot again later before they’d ask questions. The Red Legion looks to be a ballsier opponent, with heavy troops that like to get up close and personal to enemy forces. I’m imagining an even bigger version of the Hive Knights here, just looking at this double-bladed brute of a soldier. I F***ING HATE SPACE-DOGS! Enemy forces in Destiny were distinctly bipedal in their design, so seeing more rabid enemy deployments is a breath of fresh air. These pack beasts still look like proper bastards to deal with though. And thus the Tower fell. Bungie isn’t messing around with their theme of having you get your boots dirty all over again. Don’t expect to have a 380 light Level Bad Juju or Gjallarhorn at your side. Gunsmith Banshee’s stash is blown to kingdom come and back again in that trailer, taking your precious armoury of fine arms and armour with it. MAH GERNS! Most importantly however, is that Cayde’s stuff was also kasploded. Those bastards. Capital! The Red Legion travels in style, as Guardians fight back against overwhelming firepower. Does this mean that we’ll finally get to do more with our gorgeous spaceships than sit in them and wait for the next stage to load? I certainly hope so, as Bungie have set a precedent for this before all the way back in Halo 3. They definitely know how to introduce dogfighting mechanics to Destiny. Make us citizens of the stars already, yo. After the Guardians slew the God-King of the Hive itself, who else could challenge humanity? Gary Glenn Gil Ghaul, that’s who. The Emperor of the Cabal heard a distress call that was sent out among the stars from the fallen Shield Brothers, and he has answered it. Are those wings I see behind him, curled and ready for battle? I’d also lay down some cash that has Ghaul positioned as the ultimate boss of the first raid in Destiny 2, much like Oryx was.

That’s about it really! A short and sweet trailer, but one that has me excited for September. How about you lot? Did I miss out on any other cool clues? Let me dammit, my thirst is real!