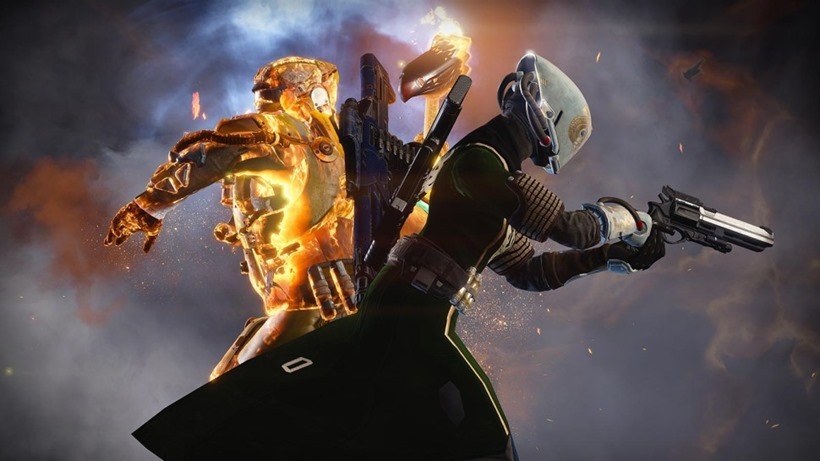 Lots of big Destiny news, thanks to a Twitch stream from yesterday. Some of it you’ve heard before, some it was only rumoured. And yes, it’s true! It’s damn true! Guardians are finally getting a vault space upgrade, just in time for Bungie to strike a deal with The History Channel and launch a Destiny Storage Wars series.

YUUUUUUUUUUUUP! Let’s crack this stream open then, and detail all the tidbits revealed. YUUUUUUUUUP!

First up, vaults. Guardians now have space to store 72 weapons, and 72 armour pieces, with each having their own tab. If you have an obsession like I do with having a inventory that looks like it’s auditioning for a remake of The Yellow Submarine, then this is great news.

Next up, Legendary marks have indeed been confirmed by Bungie. It’s a new currency that’ll replace both Crucible and Vanguard marks, this in-game cash will also be easier to obtain. 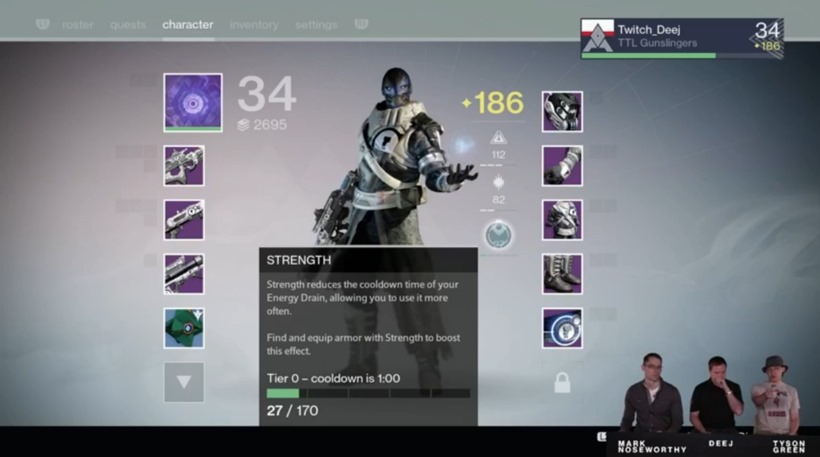 Outside of the usual mark drops in Pvp, Daily and Weekly Heroic Strikes, marks can also be obtained when legendary gear is sharded. There’s now no longer a limit to how many you can earn in a given week, but your Guardian wallet can only hold 200 of them.

Best of all, Legendary marks will now be account-wide, so what one Guardian earns another can spend. As for your existing Vanguard and Crucible marks, these will be converted to Commendations when the Taken King arrives, which can be used to up your reputation in the game and earn further reward packages. 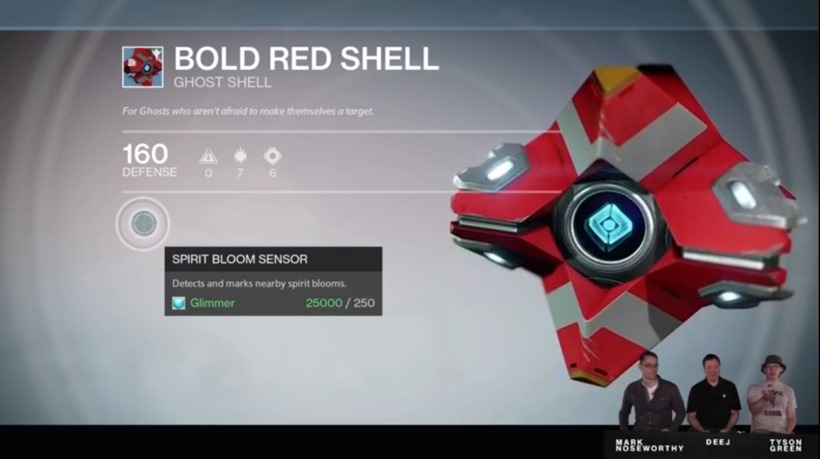 Exotic and Legendary gear will also be getting tweaked. In fact, you’ll be able to re-buy any Exotic that you once possessed, and then upgrade them into newer and more powerful forms.

Older Legendary gear can be combined with Year Two weapons with the Infuse option, provided you have enough Legendary Marks to spend. This upgrade will automatically include the signature perk of the weapon, with said exotic being at maximum power once upgraded.

There’ll also be exotic blueprints to play around with. Every time you find an Exotic, the blueprint will be added to your collection, which happens to also be account-wide. The Cryptarch will now also sell Legendary Engrams, which will help get your lower-tier Guardians up to speed. 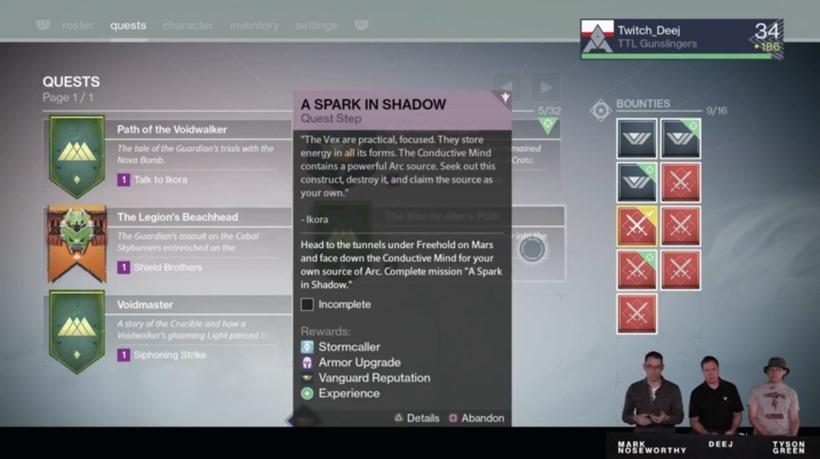 As for the Gunsmith, he’ll be adopting a car dealership mentality, allowing players to “try and buy” weapons. These guns can earn Gunsmith reputation, when used in the field to pop some Fallen skull. Once you have enough rep with the Gunsmith, you can then order new weapons from him on Arms Day.

Next up, Light level. Year Two of Destiny will see the game ditch its esoteric light level for some good ol’ XP levelling up. Light however, will now be used to gauge your overall stats. How this works, is that the game will get the numbers from all your available gear stats, combined. In other words, resist the temptation to turf any of your good gear right now.

All gear, class items and Ghosts will contribute to this upgrade, which will determine just how powerful your Guardian really is. So yeah, it’s still all about loot then. Good luck getting Ethereal Light in the next Iron Banner then. Once you’ve dinged the new level cap of 40, you can still earn better gear to increase your Light power. Neat! 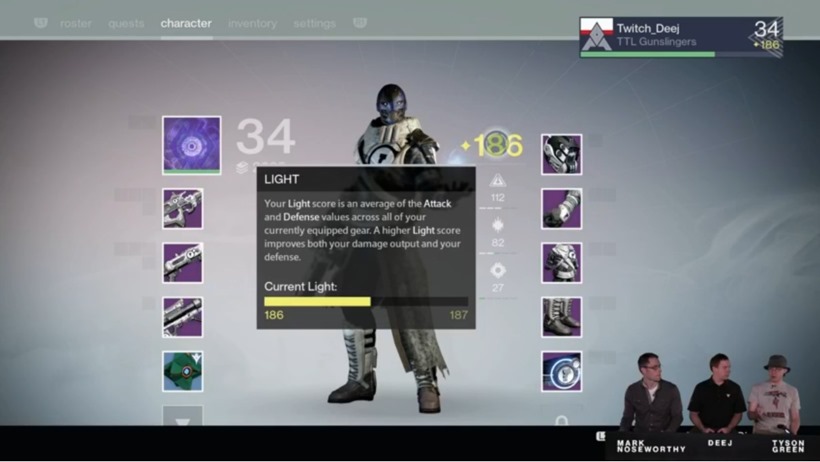 A Terminal in the Tower will now also allow players to have a look at their Emblem collection, as well as Shaders and Ships. If you need more space for more loot, you can chuck these away, because emblems, shaders and ships can be reclaimed from your collection.

Factions are now also useful, with players carrying their Faction reputation over in year two and being able to buy gear with specific perks based on your allegiance. Factions now have quests for you to tackle in order to increase your standing with them, and players can pledge their support to a faction once a week.

I’m behind Dead Orbit, because it’s voiced by the ever-awesome creepiness of Peter Stormare. 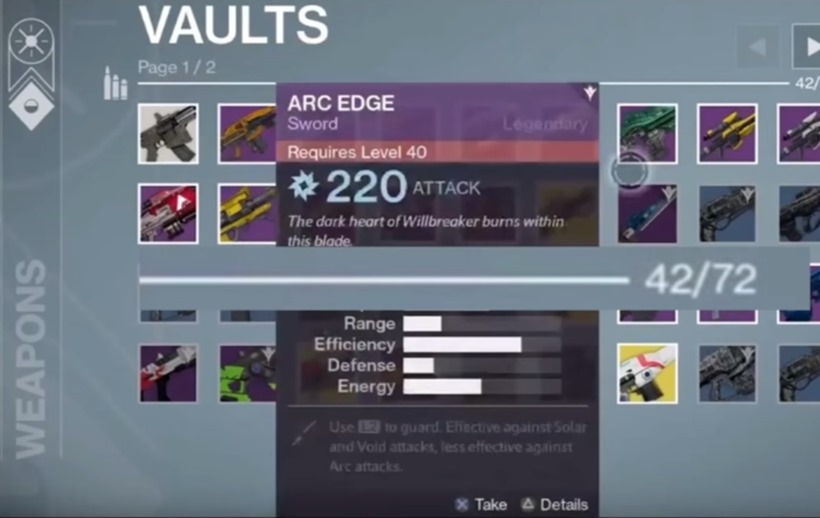 Lastly, it looks like a new type of heavy weapon is making an entrance. A heavy sword to be precise, as Arc Edge was shown in the stream. This is fantastic, because now I finally have a valid reason to shout that there can be only one when I tackle the Crota’s End raid.