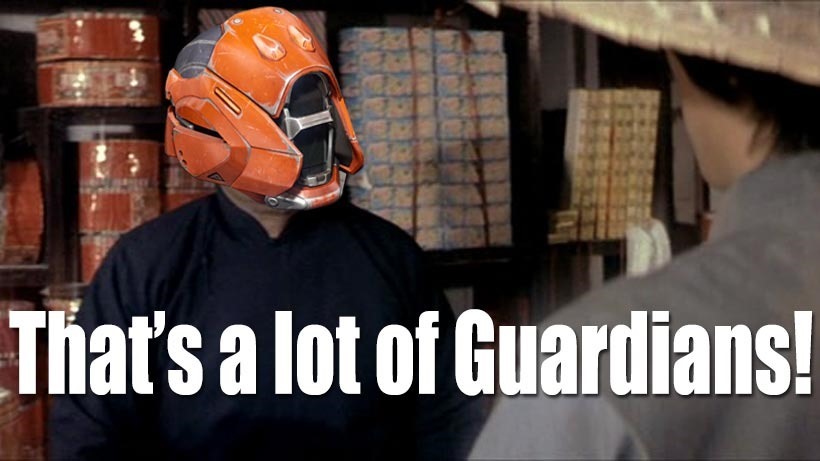 Destiny, a game where people pay for the glory of being horribly insta-gibbed by Crota’s enraged shadow and then repeat the process into infinity and beyond, is a rather big title.

It’s the kind of game that has robbed me of an unreal amount of hours, as you lot often remind me and I ain’t even mad! Because I’ve got friends in Destiny, believe it or not. TWENTY FREAKIN’ MILLION OF THEM!

Those are the hyperbolic numbers that Activision and Bungie are throwing out, as they say that Destiny has around 20 million registered players. How many of them are actually active in the game, is another story I reckon.

Still, that’s a damn fine figure. According to Activision’s latest financial report via VG247, Destiny players have been zipping around the Cosmodrome and beyond for over 2 billion hours so far. On average, that works out to around 100 hours per players.

According to Time Wasted on Destiny, I’ve plugged 116 hours into the game so far. I have zero regrets about this, as there are players who have spent over 3000 hours on the game since it launched. At this point, I’m assuming that such players will bleed pure Redbull if you cut them.

Still, jokes aside, Activision must be happy. Destiny is clearly earning them some big bucks, with the report indicating that recent DLC such as House Of Wolves has seen an increase in players who not only joined the fight, but stuck around for the long haul.

The Taken King will most likely see those numbers jump again, especially with several changes that have me excited to play a few games with some new Guardians.

Stick around chaps, ol’ D will show you the ropes! See that Fallen Archon from the House of Wolves! Your level 4 common fusion rifle will do a ton of damage against him! When have I ever lied to you? And since I’m clearly doing a good job as unpaid PR for Activision, here’s a new trailer for the expansion: