As much as I love Ninja Theory’s DmC: Devil May Cry, I have to admit that the game wasn’t perfect. Maybe it was the idea to split combat into two halves of light and dark that didn’t always gel well. Maybe it was the fact that a younger Dante meant that attacks felt heavy, awkward and nowhere near as graceful as they could have been when compared to previous iterations. Mind you DmC: Devil May Cry is still a great game, but one with issues. And those issues are getting ironed out for the remastered version.

Even now, people are still having a hard time accepting this particular brand of Devil May Cry into the fold. As well as it being a game that didn’t exactly shine well on old-gen platforms such as the Xbox 360 and PlayStation 3 according to Capcom producer Rey Jimenez, who spoke to Destructoid about the upcoming changes in this iteration. “I think a lot of the negative reaction from the game came from the early announcement, which there were definitely problems with,” Jimenez said of the game’s notorious TGS 2010 teaser.

The end product was something that definitely appealed to a wider base — but we really wanted to do this particular game [again] because it would really benefit from the jump [to current-gen]. There was some performance lacking that really affected the previous systems. This was something that could be revisited.

Which means a completely rejiggered way of playing the game. According to the preview, easy combo mashes are out, scoring SSS ranks is now even more challenging and the overall combat system has been given a Street Fighter level of tweaking of rebalancing. “All of the changes and tweaks we’ve made, we’ve done them into two categories,”Jimenez explained. 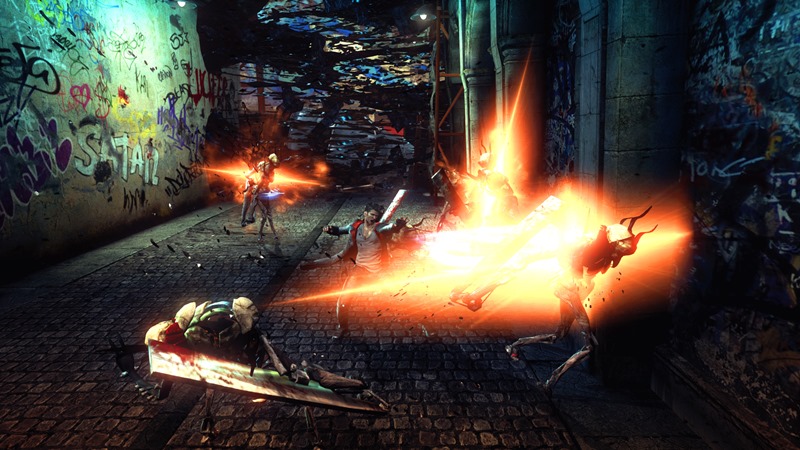 A bunch of tweaks that are for the default game make it a better title — and all the other changes that make it more like the classic DMC series are all placed into Hardcore Mode. We did this to allow people who loved old DmC to continue on with the same mechanics, but also have a title that has the best of old and new DMC. We definitely didn’t want to have people adhere to new changes if they enjoyed the original game itself.

But fear (or maybe do so if you’re weeaboo for the original DMC games) not, as this will still be Ninja Theory’s Devil May Cry. “The guys at Ninja Theory always had confidence in their work, and […] the reaction we’ve seen so far has been encouraging,” Jiminez said.

[The developers] are very proud of the work they’ve done, and Capcom has been behind this product since day one.

You know what? That makes me happy. When it comes to story, characters and visual design, I’ll always back the Ninja Theory version of Devil May Cry. To me, it’s the superior version of that franchise in those specific categories as Dante was cockier and cooler than ever before and some of the levels were breath-taking examples of how to really run wild with a license. But throwing in re-polished gameplay that is more in line with the Japanese version of the game? Hells to the yeah, baby.