Back in the Tetris heydays on NES, Dr. Mario (and Dr. Wario) offered a more colorful and strategic take on the puzzling game. It offered hours of fun, especially if you played against a friend or family member. Now it has returned in the form of a 3DS title and it includes a bit more, but still feels almost exactly like the old game.

The game looks much like Tetris but with colored blocks to represent bugs or viruses. Throwing multicolored pills into the level, players must rotate them in order to match four of the same color, eliminating the virus. This part of the game is almost exactly like the original title and will feel incredibly intuitive to old and new users alike. 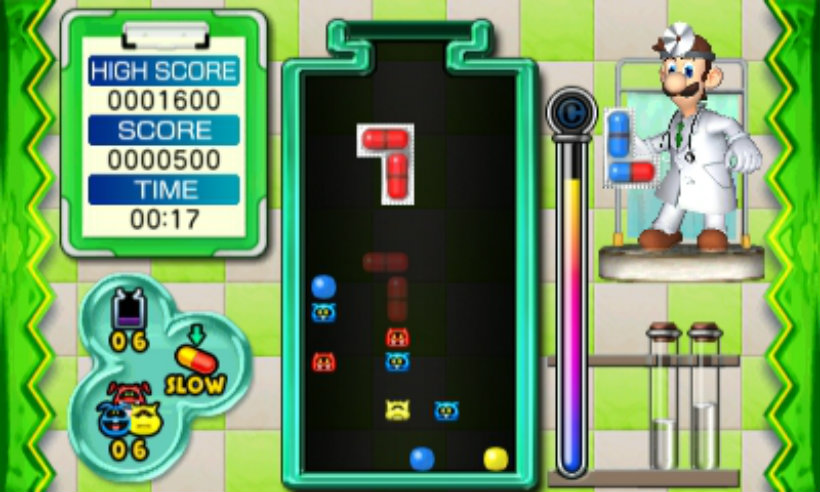 There are a few new elements to the game, though. The name Dr. Mario belies the fact that there is another doctor in the house, Dr. Luigi – that’s right, both of these plumbers apparently went to medical school. Using his L-shaped blocks that link two pills together, there’s an added challenge to maneuvering his cures to the perfect spot.

As players clear the board, the fill a gauge to release a miracle cure. These power ups come in four variations. The first and easiest to understand is a bomb that clears out a section of blocks. Next up is a color specific clearance – once you match it with four like-colored blocks, it erases all the non-virus blocks of the same color. A similar power up in the shape of a V can be dropped to remove all the viruses of the corresponding color. Finally, there are arrow miracles that will cure entire rows, columns or both of viruses and extra blocks. 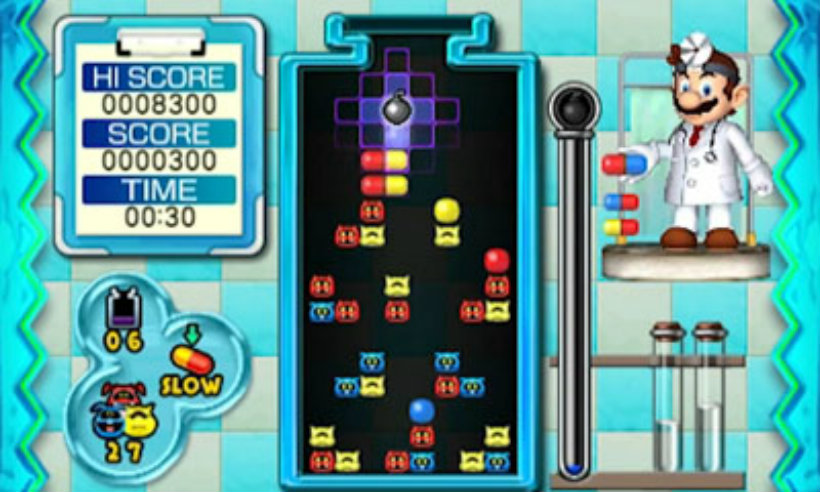 In order to guide you through these various powerups and introduce new players to the game, there are ten training missions, as well as 20 basic and 20 advanced levels. Unfortunately, these 50 levels don’t really feel like enough; even someone who has never played Dr Mario will probably be able to complete all the levels in a few hours of gameplay. However, the real longevity will come from endless modes and multiplayer.

Players get a taste of the multiplayer in those 50 levels as some of them include going head to head with the computer to race to clear the board first. As players remove viruses and score points, they will cause blocks to rain down on their opponent, making the game even more difficult. It is definitely the most challenging and rewarding gameplay that Dr. Mario has to offer. Plus, with rankings for online play, you can battle it out to see who is best at the puzzler. The multiplayer was incredibly smooth and I had zero lag despite playing against primarily Japanese opponents. Players should be prepared for a bit of a wait in the lobby to find a partner – while it doesn’t take very long to get matched up, playing on handheld seemed to make me a bit less patient than I am on PC or console. 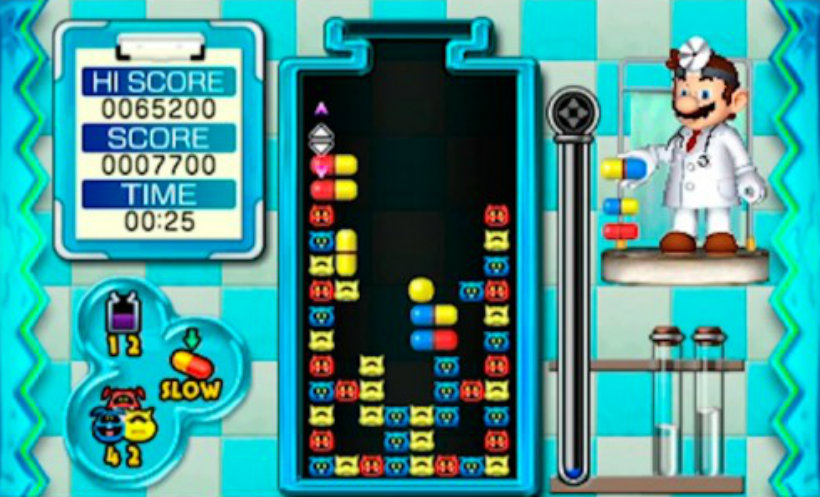 For those who finish all the levels and don’t feel like taking on strangers (or nearby friends) at multiplayer, there are a selection of modes in Custom Game. Germ Buster is the most unique as it allows players to change the orientation of the 3DS, using the touch controls with stylus to move the pills on the screen. It takes some getting used to but allows for a lot more control. However, with tap to turn and drag to move, I did often find that I was turning blocks as I intended to drop them on my target virus. At least it does add a different form of challenge to the otherwise repetitive game. Even the music is a repetitive loop of the same short melody, prompting me to turn off my volume when playing more than one level in a sitting.

While multiplayer does add longevity, for those who don’t play online there isn’t really all that much to the game. However, as a relatively cheap downloadable title that really is just a modern update of the original, it can be fun for an hour or two while you wait for a game you really want to play to download.