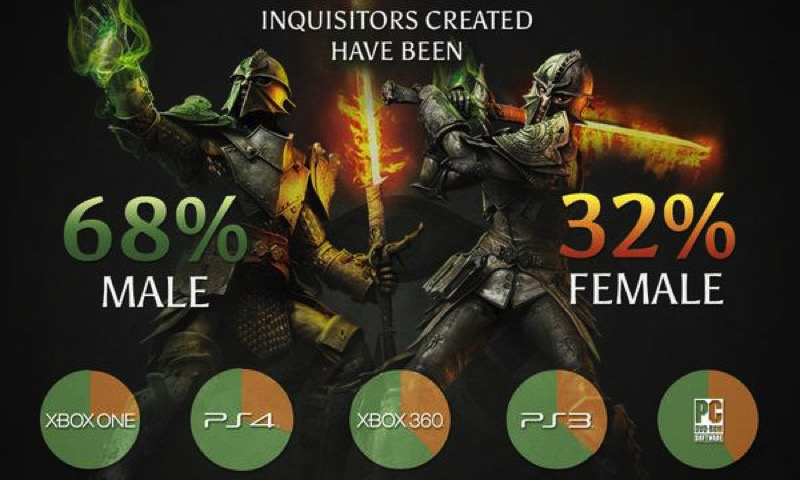 Yesterday, Dragon Age: Inquisition stats about how many dragons have been killed were interesting, and gave me a reason to share some of my tips and tricks for killing the dragons scattered around the world. Here’s a new infographic, but I’m rather surprised by it.

I find it weird how much more open-minded PC gamers apparently must be considering their tendency towards female inquisitors. It’s rather amusing to me that Xbox One is the most misogynistic console. The PS4 appears to be a bit more woman-friendly than Xbox One, but I’ll relate that to people wanting pretty pictures of ladies and we know how out of focus Dragon Age: Inquisition looks running at 900p compared to 1080p.

I haven’t seen videos of Dragon Age: Inquisition on old generation consoles. Does it look bad? That game is so gorgeous on PS4 and PC, I think I’d be far too sad to see it downgraded so far on the older consoles. Also, I’m amazed that they would be able to fit so much content on the old generation consoles – the world is massive and filled with all kinds of quests and decisions. I can’t imagine that the older consoles can handle that much information. Either way, I’m glad the older generation players are letting a female character rule the world – I’m just surprised at how many are choosing male inquisitors. Don’t most people play with female Shepard in Mass Effect? Why is it different for Dragon Age?

Have you been playing the game? What have your inquisitors been? My first inquisitor was a female dwarf rogue. This time, I’m playing as a female Qunari mage.