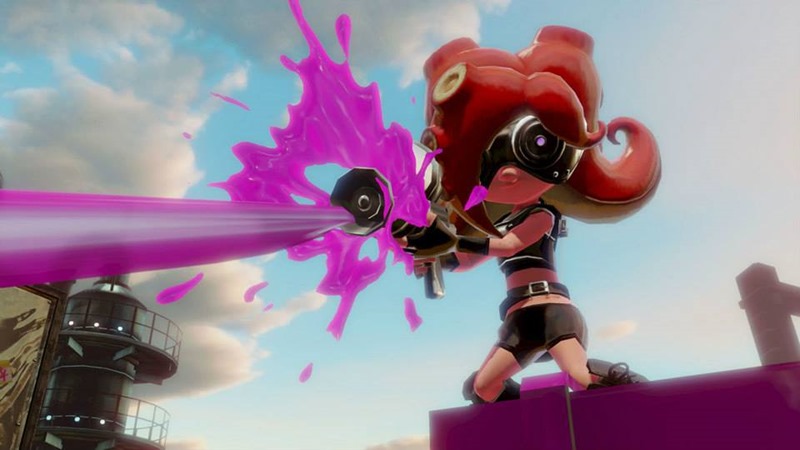 Despite its cute, colourful exterior, Splatoon might just be one of the more hardcore games Nintendo has decided to bet on. The online shooter shares most of its DNA with traditional multiplayer tropes, including various different weapons and a bunch of customisable items. We’ve only seen a handful of them to date, but that changed with a screenshot explosion last night.

Nintendo has revealed close to 100 new screenshots for their squid-based ink shooter. These screenshots show off some brand new gameplay from what looks like the single-player component of the game, including spiralling vertical maps, barriers with ink meters on them and a rather funny looking old sailor. The campaign in Splatoon is going to be more platforming focused than the frantic shooting action in multiplayer, forcing you to use your ink weaponry to solve puzzles and traverse the landscape. It looks like classic platforming fun, and a neat distraction from the competitive nature of the game’s real draw.

There is no denying it – Spaltoon is meant to be played online. Playing and levelling up your own Inkling will unlock various cosmetic items in the game’s hub world, which you can then purchase and equip to give him or her their own personal flair. Just from the pieces pictured below, I know I’m going to get hooked up with the Ink Jordans and Inky Fedora combo – because there is no space for logical sense in world like Splatoon.

There are also two new weapons to check out, with the first looking like a long-range ink sniper rifle. That’s another staple in online shooters, but a weapon type that is very different to the short-range ink guns we’ve seen in the past. But that doesn’t compare to the massive, sonic trap that crops up in a few screens. I say trap because it looks like an item you drop down to secure an area for a limited time, with the sound waves blasting back any paint thrown at it. Neat for strategic placements.

You can check out the best of the 100 screenshots below, including a peek at an evil octopus girl clan that I’m assuming you’ll have to go toe to toe with in single-player. If that unlocks their goggles for sale, I’m so there. Splatoon is out on Wii U in May.