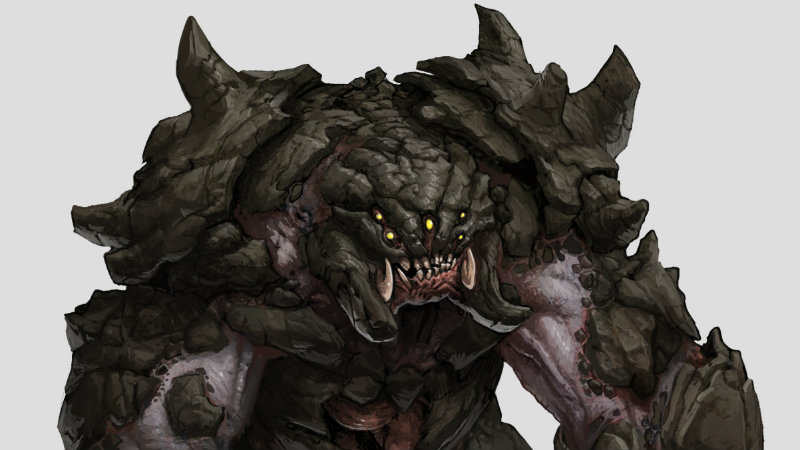 We knew a fourth monster was coming and it would only be available to those who pre-order or buy extra DLC later. But he has emerged in the wild and he’s a juggernaut, baby. Similarly massive are the digital versions of the game with all kinds of cool extras, including a “PC Monster Race” edition.

First up, check out Behemoth.

Here’s your non-YouTube link for those who need it.

According to Turtle Rock, Behemoth requires a whole different style of play. He’s the largest monster in Evolve, and the largest monster that there will ever be in the game. How big is he? So big that he can’t jump – he moves by rolling around the landscape like a juggernaut. Sure, he can climb, but slowly, making him an easy target. Sounds like it’s best to just roll around and crush everyone. Here are his abilities:

I can already feel the combinations – imagine doing a Tongue Grab on the medic to separate her from the pack and then trapping her with Rock Wall making the Lava Bombs and Fissure absolutely annihilate her. Oh what a plan!

Behemoth comes free if you pre-order the game, but there are a bunch of different versions to choose from. Obviously, 2K has a special relationship with Xbox for this release, so most of the details are about Xbox One versions, but there is some extra news for PC, too.

The full game will cost $60 in the US of A and contains the game as well as the monster expansion pack (if bought before launch). However, the digital deluxe version ($80) also includes the Hunters Seasons Pass which has four brand new hunters as well as exclusive Monster skins. I can tell you now, those Magma skins are ridiculously sexy and would be my skin of choice. Seeing as the season pass runs at $25, it’s a $5 saving for grabbing the digital deluxe version

My favorite, though, is The Evolve PC Monster Race Edition.

This is for the gamer that is planning for the future and wants to save big bucks, right now. This version of the game jams in everything mentioned above: The Fourth Monster, Behemoth (when it’s available after launch), the Hunters Season Pass (the next four Hunters are yours as they become available after launch) and the Magma Monster skins. On top of that, this version locks you in for the Unannounced FIFTH Monster as well as the FIFTH and SIXTH DLC Hunters.

But I love the way that they say this part: “Four Monster Skins that are exclusively available for PC in this edition for 30 days. Because you are Monster Race. And you deserve bragging rights.” Always nice to see some extra loving for the PC Monster Race. Of course, that version will set you back $100, so you’d better be planning on playing this game to death to get your money’s worth. Still, cool to get all the unannounced stuff, too.

I’m starting to wonder if I should pre-order Evolve. Even if I play offline for the first week or so while they sort out servers, at least then my hunters and monsters will be totally unlocked and powered up, making me a monster in multiplayer.