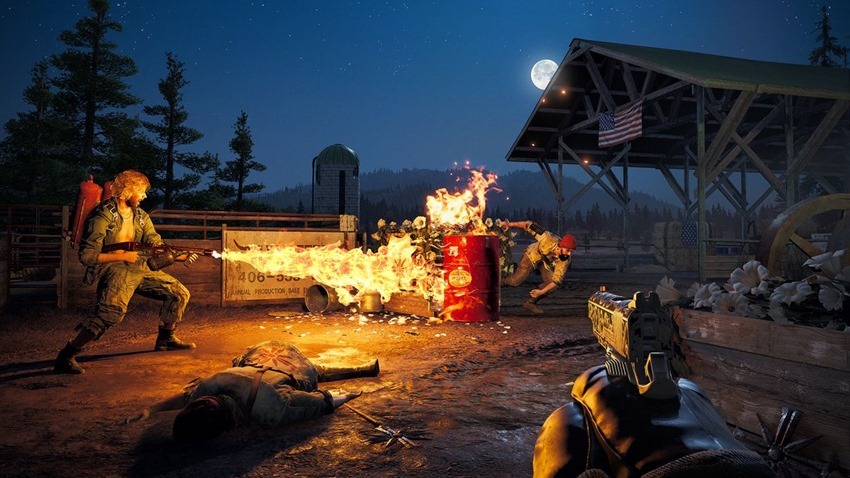 After months of not giving a damn, I’m now sat at my desk just wishing I was playing Far Cry 5. There’s a certain enigmatic charm to Hope County’s unhinged hillbillies and sociopathic religious zealots, and I can’t wait to kick the stuffing out of them.

Far Cry 5 doesn’t fix what wasn’t broken in the previous games, but it does make a few fantastic changes that help make the whole thing feel a lot less formulaic. For starters, it ditches the goddamned radio tower nonsense. Secondly, it eschews the usual open world sandbox with a linear story progression for something where you’re able to tackle any region from the start.

“When you go out into the world, you’re going to be able to go in any direction – that’s a huge change for us,” says director Dan Hay. “Typically, in the past, we’ve been fairly prescriptive about where we want you to go but this time, if you’re asking the question ‘where should I go?’, the answer is ‘wherever you want’ .

“Once you complete the opening of the game and you’ve cleared Dutch’s island – a sort of starting area to get your bearings – you go out into the world and you can do whatever you want.”

With so much freedom to do whatever you like, how long can you expect to play the game? According to a new interview with Hay by Gamespot, at least 25 hours. “I would say that a good player will go through it in 25 hours,” Hay told GameSpot.

Of course, there’s a lot to get distracted by – including the fishing, hunting, stunt activities and other bits of miscellany.

“What we’re seeing is people going into the world and just spending four or five hours fishing or hunting, or just doing stuff that we hadn’t really prepared for,” Hay said. “So it really depends on how you play.”

On top of that there’s Far Cry Arcade, which is the game’s robust map editor, that’ll see people creating all manner of stuff to play once the game proper is done. There’s a lot of game to be had here.

Far Cry 5 is out on March 27, on PC, Xbox One and PS4. It’ll be enhanced for the X and Ps4 Pro as well. For fun, while you wait, here’s the game’s soundtrack for you