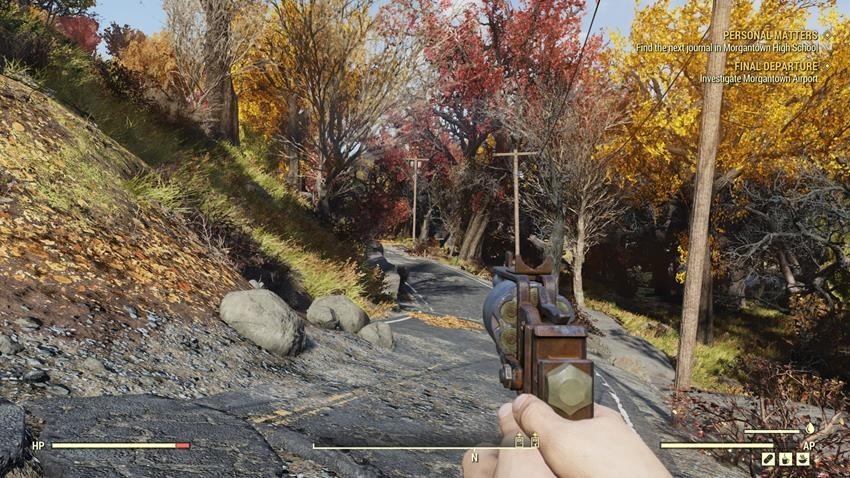 If you were hoping for Fallout 76 to scratch the same itches that most of Bethesda’s attempts at the franchise have, then you’re surprisingly in luck. During my four or so hours with the currently very unstable beta, Fallout 76 presented a familiar open-world with familiar quests to fill and mechanics to engage with. The big difference is that for the first time you’ll have other human players around you – dealing with their own quests, building their own camps and screaming obnoxiously into their microphones. It’s a change that should make Fallout 76 feel more alive, but it might just be the most desolate iteration of the game that has released thus far.

Fallout 76 puts you in the shoes of a member of Vault 76, which happens to be one of the first to open up after the nukes have dropped and the radiation has only slightly settled. You’re tasked with rebuilding civilization in preparation for other vault openings, but also charting out this strange new world you’ve been detached from for several decades. Its story lends itself to this idea of being a first responder on a scene of a tragedy. You’ll come across tapes and notes left by survivors that never got a place in a vault of their own, which detail how quickly the world above ground turned into a hellscape of desperation and raw survival. 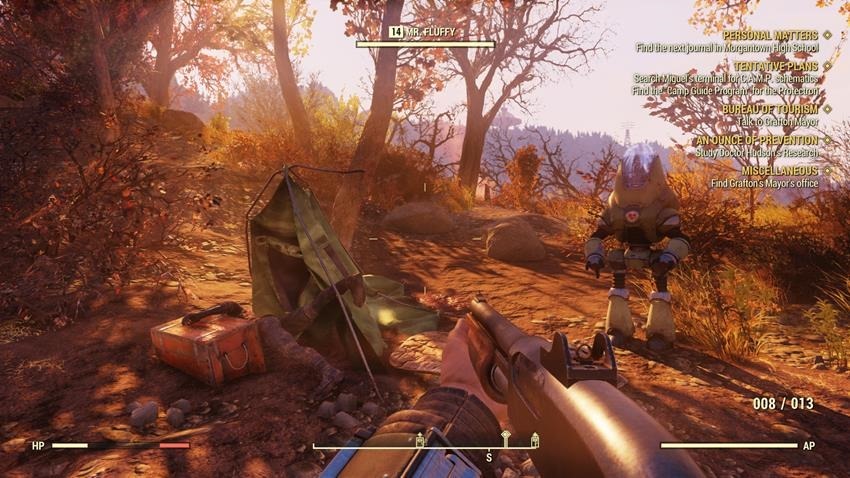 The problem thus far is that you don’t actually engage with any of these survivors, which has its reasoning in both narrative and gameplay structures. Bethesda has detailed how you won’t come across other human NPCs, and how all other humans you do encounter will be actual players. This is supported by the story in a grim way, with each breadcrumb trail you follow to a possible human partner ending in the discovery of their rotting corpse and a handful of supplies. It’s dreary but also incredibly lonely. If you choose to play Fallout 76 alone (which, by all accounts, seems entirely possible) you’ll have to find comfort in the many audio logs and supremely unhelpful robots you encounter along the way – no settlements with daily life, no ghouls with a story to share.

Having other human players populating the world does have an already tangible effect on the way you play though. Fallout 76 lets players team up to tackle any of its main quests, but also ropes you into dynamic events that happen on cycles around the map. This acts as a good method to draw players to a point and co-operate to complete objectives within a given time frame. I frequently would start these events alone and end them with multiple players joining in, after which we parted ways on continued on your lonesome adventures. Fallout 76 incentivises teamwork well so far, and offers little reward for abusive PvP encounters. Even better is that it doesn’t allow PvP to factor into how you play at all if you don’t want it to, with damage dealt by other players being significantly reduced (sometimes to a negligible point) if you don’t return fire. 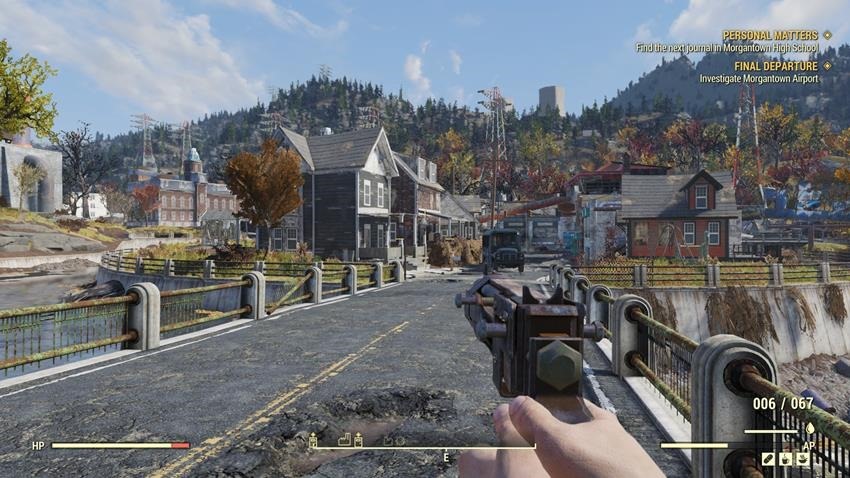 But its overall structure pushes you towards creating friendships and building camps together, which is a feature that needs to be explored more when the full game releases. Every player has with them a mobile camp, which can be deployed outside of main settlements. Just like Fallout 4 you’ll have to scavenge (a lot) for resources to build structures, which can serve useful purpose like weapons and armour craft or just be for show. Base defenses, electricity routing systems, water filtration and more are collected into a user-interface that’s overwhelming and difficult to parse. When moving you’ll also have to manually pack everything up too before doing so, which I learnt quickly after deploying my camp elsewhere and having all my structures automatically scrapped in the process. Building is just an unintuitive as it was in Fallout 4, but requires far more engagement in Fallout 76.

That makes the prospect of playing alone daunting, as you’re essentially hoping Fallout 76’s world deals up the tools you’ll need to avoid camp construction entirely. That’s a risky way to play, especially when supplies such as Stimpacks, food and healthy water are in short supply. You can easily hunt animals for raw meat and collect dirty water to boil, but you’ll need to happen upon a cooking station to do anything useful with them. Additionally, you’ll need to have other resources to even cook in the first place, all of which is limited in the massive world you’re exploring. This pyramid approach to survival is present in all facets of Fallout 76’s gameplay, and it already feels like it would be far easier to manage playing with a team of people rather than alone. 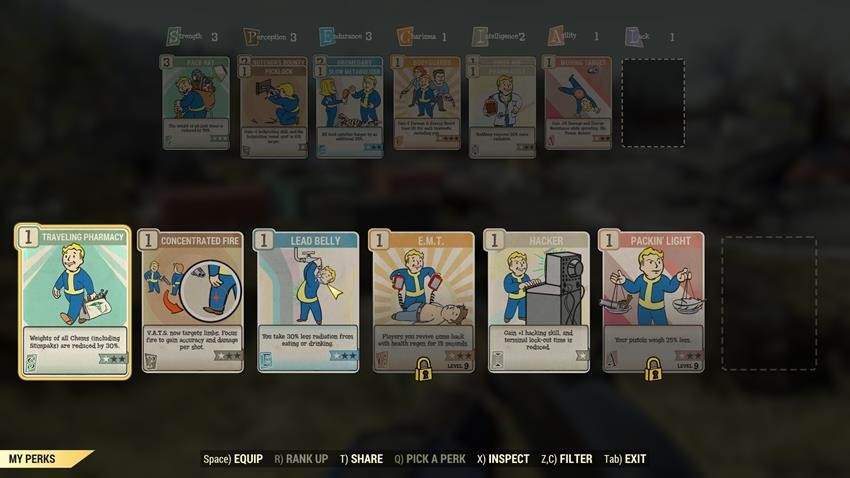 Given that Fallout 76 is being designed with that idea in mind, it’s perfectly fine. But it’s important then to understand just how different this is to past Fallout games you’re likely familiar with. This isn’t just another adventure in the wasteland to get lost in, but rather a survival game with the same quest structures attached to it. It’s a captivating one thus far, and I enjoyed taking many detours during my journey towards the next quest marker. Its world has secrets to uncover and interesting, abandoned buildings to poke around in just as before, but with the ever-present threat of running out of food or water while you’re trying to soak in its world. 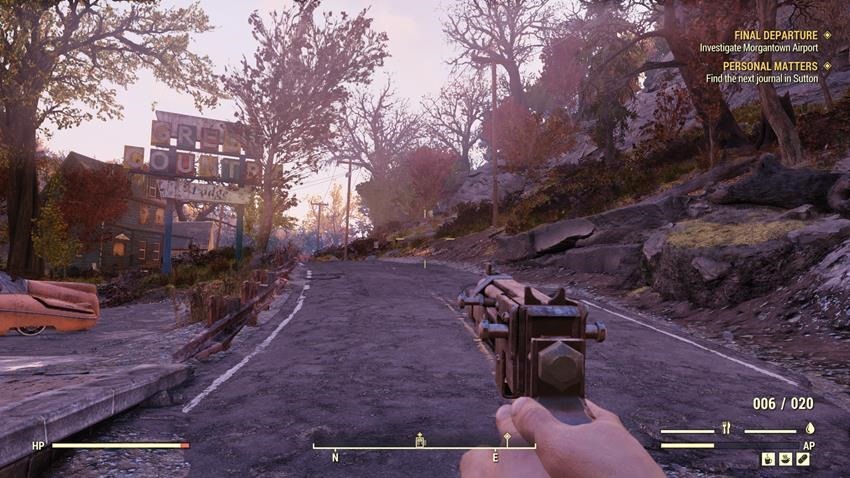 Fallout 76 is a massive game though, and that’s evident already from the large map you’re presented with just mere minutes into the start. That means it’s going to take a lot more time to really understand how all of these pieces fit together over time, and whether they transform Fallout into a new multiplayer-focused RPG successfully or hamper the experience with overbearing survival mechanics. It’s an eerily familiar formula with more features to worry about than before, but it retains the same allure of exploration and combat that has been present since Fallout 3. If that’s what has drawn you to Fallout in the past, then 76 is definitely worth a shot. But you’ll have to accept that it’s not going to treat you the same way as before.