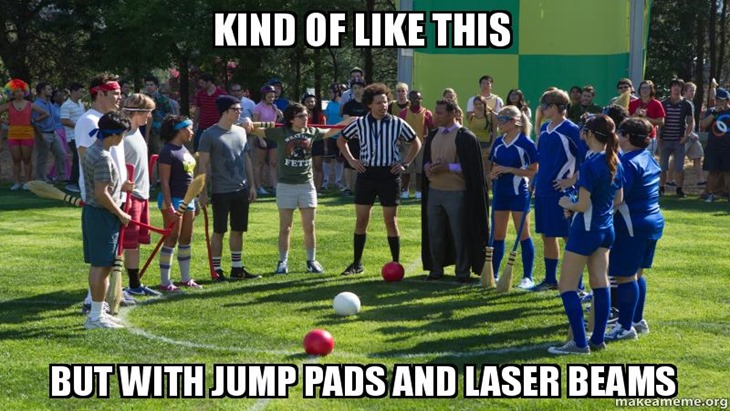 I will be completely honest. Before I started writing this, I had absolutely no idea that Epigenesis even existed. After doing some research and watching the new trailer, I think I can say that I am officially interested.

Epigenisis is a game that is being developed by Dead Shark Triplepunch, the team that won the 2013 Make Something Unreal Live competition. For lack of a better description, it reminds me of a futuristic Quidditch. Two teams are tasked with taking control of the ball that spawns in the middle of the map. They then need to throw it through their enemy’s hoop on the opposite side of the map to gain points.

The similarity ends there though. There are no broomsticks, no snitch, but perhaps you could draw similarities to bludgers thanks to the weapons at the the players’ disposal. Players can disrupt their opponents in a variety of ways. Have annoying enemies that won’t leave you alone? Simply punch them off the map. One weapon can be used to push your opponent or even the ball around, acting similarly to a railgun, just without the gib potential. The same weapon can be used to pull the ball out of its trajectory path if the player uses it correctly.

The game looks incredibly fast paced. The railgun like weapon isn’t the only thing that reminds me of Quake. Maps are made up of different platforms, and jump pads littered throughout the map are used to jump between them. When a team finally scores, they gain access to a super-seed which they plant on a platform to capture it. The game can either be won by pathing a node system from your goal to the enemy’s, or by simply having a better score when the timer runs out.

It’s an interesting premise, so I’m quite interested to see how it’s received by gamers. Epigenisis will be available on Steam from the 1st of August, selling at $9.99 for a single copy, or $29.99 for a four player bundle. If you’re interested in the game, you can read more about it on the developer’s blog.