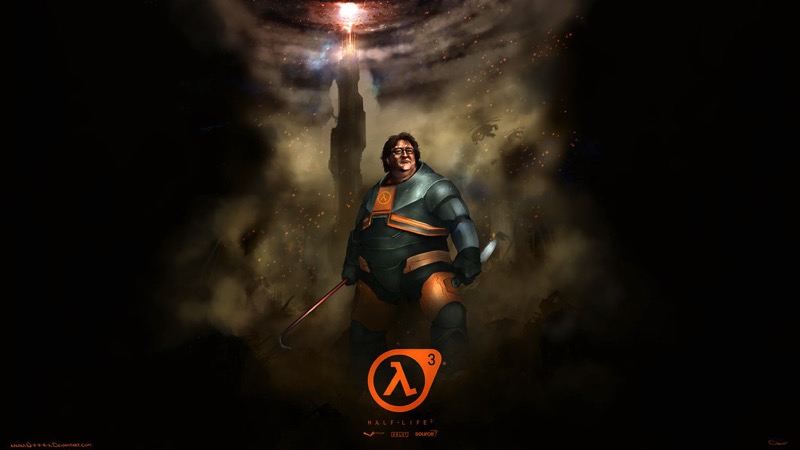 Oh Half-Life. Your fans are more ravenous than Final Fantasy zealots, more single-minded than the AMD vs NVIDIA debaters. Half-life 3 has gained almost a mythical level in gaming – it’s the title everyone is waiting for and assumes they will never get. I can’t even imagine that it would meet anyone’s expectations, no matter how awesome it could be. Newell knows you want it, but his idea includes multiplayer and might not be what people are clamouring for.

Speaking to Geoff Keighley in a podcast, he explained that while everyone at Valve loves their titles like Team Fortress, Left 4 Dead, Dota 2 and Half=life, they are each specific tools and the company needs to be strategic in how it develops technologies in tandem with its game properties. He recognizes that this may not align with fans’ desperation for a specific game, like Half-Life 3. Comparing it to his own fandom for particular TV shows or book series, he acknowledges the fear people have of “Hey, I remember this awesome experience and I’m starting to get worried that I’m never going to get to have it again.” However, he thinks people will be happy with where Valve is putting their time and energy:

The only reason we’d go back and do like a super classic kind of product is if a whole bunch of people just internally at Valve said they wanted to do it and had a reasonable explanation for why [they did].

But you know if you want to do another Half-Life game and you want to ignore everything we’ve learned in shipping Portal 2 and in shipping all the updates on the multiplayer side, that seems like a bad choice. So we’ll keep moving forward. But that doesn’t necessarily always mean what people are worried that it might mean.

He has said before that the game would only happen if a team at Valve wanted to make it, but that comment about multiplayer is new. Is that something necessary for a new Half-Life 3? What sort of lessons learned would apply well to the game, or would anything new be seen as blasphemous to the thousands of die-hard fans? It’s a slightly more nuanced stance on Half-Life 3, and it’s always great to see Gabe showing that he hears everyone shouting for the game. However, to get a team together that’s willing to take on this project and the potential wrath of the gaming world? I just don’t see that happening anytime soon.