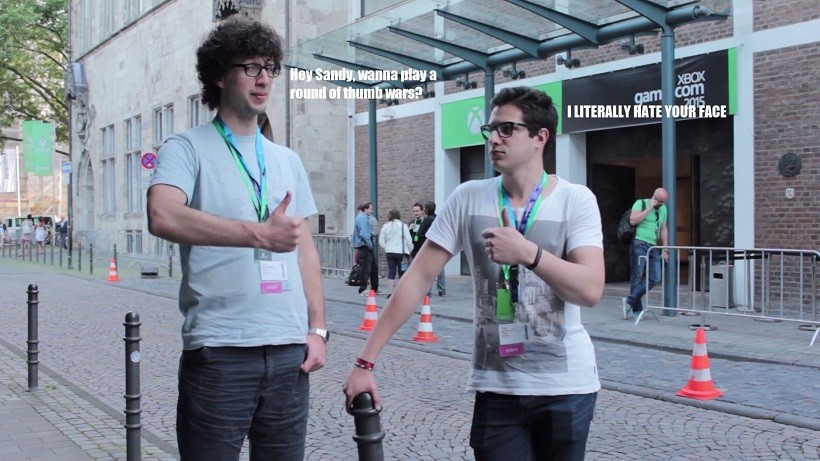 Gamescom still hasn’t properly kicked off, but at least today was somewhat filled with a bit more than beer and an awkwardly full hotel room bed (not my idea). What is usually a day filled with press conferences from the two big hitters in the industry instead simmered down to just one – with Microsoft’s press conference providing the most news for the day. It was, however, not the only thing we got up to.

Well before that, Matty and I got a sneak peak at what might be the biggest surprise of Gamescom – Guitar Hero Live. Although you can read all his lovely thoughts about the game, it really was a great way to start the day – with beer in hand, rock in ears and some truly exciting modes making their way to (what I consider) the best music game around.

The afternoon was dominated by Microsoft though, and it’s what makes up most of the time in today’s little wrap-up. Microsoft raced strong out the gates with gameplay reveals for Quantum Break, Crackdown and Scalebound – of which two really impressed. Quantum Break looks as stunning as ever, with the time-bending third-person gameplay impressing on a technical and visual scale. Lest we forget about the stellar casting in the game (and accompanying TV series) too.

Scalebound was equally impressive, giving off a decidedly Final Fantasy feeling. The lush, leafy setting coupled with the enormity of your dragon companion certainly makes it feel like a Japanese inspired title, but there’s enough Devil May Cry styled gameplay there to ensure you know it’s a Platinum Game. Ultimately, a reveal worthy of the year’s wait – a compliment I couldn’t really extend to my most anticipated title of the conference, Crackdown 3.

Matty and I seemed to be pretty much on the same page about the conference too, with Microsoft struggling to keep the adrenaline flowing like they did at E3. Regardless though, it was an enjoyable evening – capped off with some incredible hands-on time with Cuphead and a very brief look at Dark Souls 3 (which is leaning heavily on Bloodborne it seems). All that and a handful of evil glares at rude pedestrians can be pleasantly viewed above.

Tomorrow though the doors of Gamescom briefly open, meaning we’ll actually get to play a lot more game, conduct a lot more interviews and actually start feeling that long reaching whip Geoff has ready for our backs. Send help please.