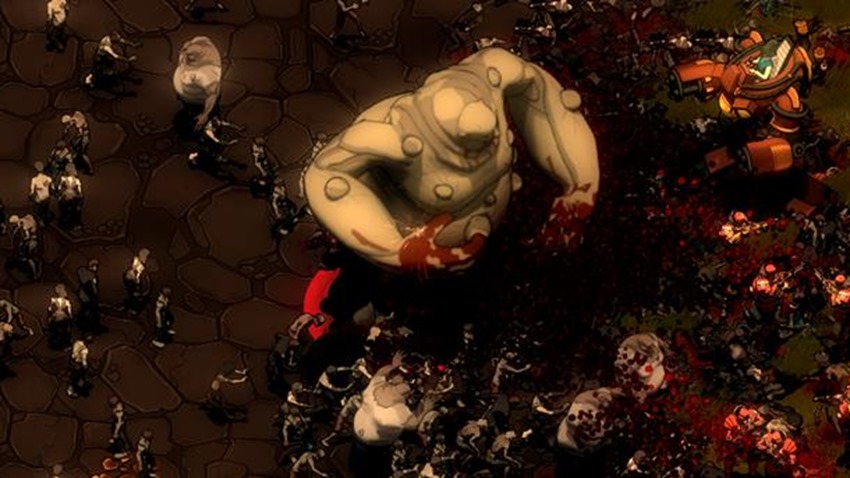 Post apocalypse zombie strategy game may rely on strength in numbers to overwhelm players, but zombie units wandering on their lonesome? Pretty easy to pick off when you have a squad of competent soldiers on the prowl. Even your usual bloated zombie bastard is prime game if you keep the fat bastard running straight into an ambush, as the recently deceased don’t have much when it comes to pound for pound power.

That’s all set to change soon in They Are Billions introduces a new unit to the enemy mix. Say hello, to the Infected Giant.

Yes sir, that’s an entire 10 000 hit points worth of bullet resistant rotting flesh, that has had one hell of a growth spurt. The Infected Giant is the undead boss of bosses, a towering behemoth that’ll be found wandering the outskirts of a map on any mode that uses the difficulty mode of Challenging or goes above that. Fortunately, Infected Giants will be spotted on the mini-map by a roaming icon, so that you know where to avoid sending your units.

When the brain-hungry bugger eventually makes his way to your thriving outpost though? All hell is going to break loose. “The Infected Giant is a very special enemy with some specific features. The Giant is a mutated infected that has grown without limit for years and years. It is so huge that the earth trembles under its passage,” Numantian Games explained on their blog.

Giants are huge and powerful but with a tiny brain. They cannot hear so they are not attracted by nearby activity. Also, they are almost blind, they react slowly to your actions, but be careful, once it detects a target it will chase it with terrifying speed and there are no walls in the world that can stop them! We recommend you avoid the Giants and don’t annoy them under any circumstance. But you can’t avoid them all game, you should kill them before the final horde comes for your colony, because they will join them as any other infected on the map.

Believe us, last thing you want is to fight the final swarm and the Giants at the same time…

There is some strategy for dealing with the Infected Giants and the horde however. Thanks to their size and indiscriminate power, Infected Giants can clobber anything in front of them. Including their own allies:

The Giant has the most powerful attack in They Are Billions. They have a very long reach and they hit everything in a 120º arc. Nothing can escape their attack, even other infected can be destroyed if they are within the Giants attack range.

If that’s not enough of a challenge, then congratulations you masochist, They Are Billions is going to up the difficulty ante soon. With the new Nightmare modifier, players can face a horde that is 30% larger than the swarm that you encounter in Brutal mode, drops in three Infected Giants and is damn near impossible to beat according to Numantian Games:

We think it is almost impossible to beat the game on this mode but it will be great fun to try. If you can beat it in the desert, you will get a score factor of 800%!! Good luck!

Some technical info about this mode: We have optimized TAB even more in the 0.9 version, allowing the engine to move more and more units. That being said, this mode requires a good computer with many cores and a high speed. Using a lower spec computer can cause the game to suffer, dropping frames and running slowly when the big swarm heads towards the colony. However, the game will continue to be playable.

Honestly, I’m loving the progress on They Are Billions. It’s one of my top ten games of 2018, and it has yet to even drop its campaign mode into the mix. When it does head out of the Early Access gate however, I have a feeling that it’s going to be a magical final release.