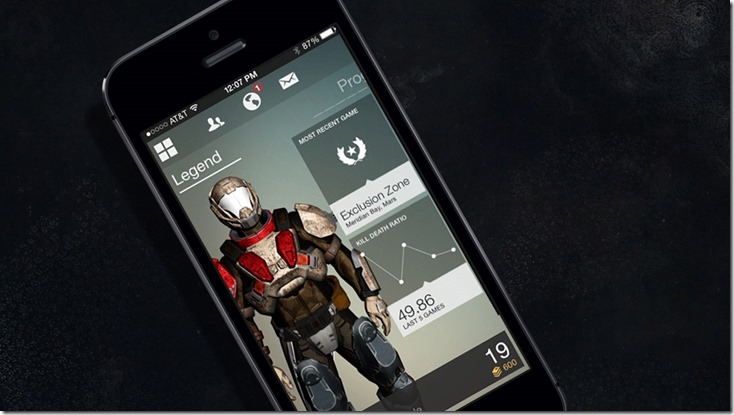 Destiny’s beta kicks off this week on the PS4 and PS3, coming to Microsoft platforms next week. The beta is supposedly a bigger, broader experience than the Alpha, giving players a good chunk of content to explore. You may want to download the fancy new companion app to help with that.

Unlike most other companion apps, which act more like additional advertising instead of an actual companion, the Destiny companion sound pretty neat. The home screen will feature a full 3D render of your Destiny characters, showing off their gear and colour schemes in real-time. Any changes you make in the game will be reflected immediately. Even better is that you’re able to change gear using the app, which will take effect in the game as well.

The app also tracks all sorts of statistics for you, keeping score of all your headshots, steps taken and more. Just like most smartphones do today, more or less. You’ll also be able to track quest status and level progression, flip through your inventory and even check what’s for sale back at the tower. Those of you more interested in the lore surrounding Destiny will love the Grimoire. While you play Destiny you’ll pick up cards, which can be unlocked using the Grimoire in the app to explore more details regarding the different planets and bases you encounter.

The app will be free on iOS, Android and via a browser when the beta launches this week. the iOS version will only be available on iPhone for the beta, but Bungie has promised that it will be universal by launch. If you’re using a Windows Phone, then you’re out of luck as Bungie isn’t planning on at all. And no, that does not mean they hate Microsoft.

So why not download the app, enter our competition with Megarom and join us for some Destiny fun this weekend?