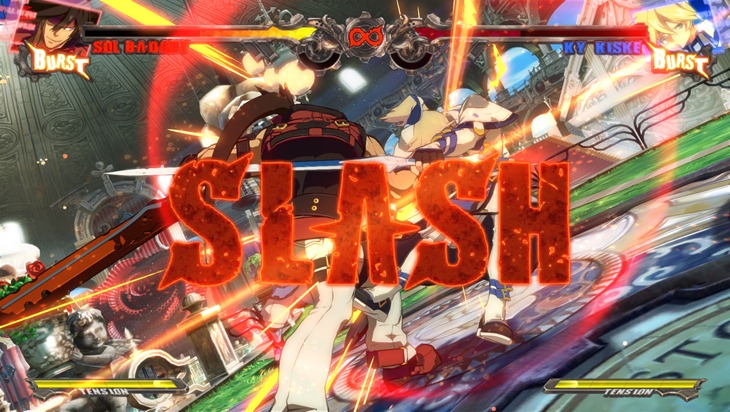 Fighting games. At the end of the day, they’re all about who can hit the hardest, who really deserves to wear a Tapout T-shirt. There are plenty of great franchises out there, to suit every taste possible. But when it comes to anime-visualised crazy, Guilty Gear will always be my favourite in that genre. And with a recent arcade edition announced for console, expect plenty of content to be added to that release.

Believe it or not, but this will be a fighting game with a story. WHAT SORCERY IS THIS? Here’s the synopsis, from AGB:

A new mode continuing further than the story of the arcade version. The story will be told through an adventure game-like format, but will try new things to set it apart from the norm.
Find a outline of the story below.

October 21, 2187. 12:12 p.m.
A young woman who calls herself Ramlethal Valentine has declared war against the world. Not a single individual, organization, or countries took this declaration as a laughing matter. Because of the prior “Baptism 13 Incident,” during which the capital of the Illyria Kingdom suffered a violent assault, the attacker also referred to herself as “Valentine.” Now, to make sure of the truth of the matter, the world must take action.

Moving onto gameplay, Tutorial and Challenge modes have been added so that franchise initiates can learn how to get the hang of Potemkin’s anti-air combos and Sol Bad Guys ludicrous offensive abilities. In addition to all that, there’ll also be M.O.M Mode:

M.O.M. Mode, or Medal of Millionaire Mode, is a single-player mode where players fight against AI-controlled characters to earn medals that strengthen your character. Using the medals you obtain, it’s possible to purchase new skills and items in this RPG-like character development mode.
There are plans to support network play in this mode.

And what’s a new fighting game without a new character or two? The home console version gets that new brawler, as well as all the old favourites:

Delicious. Guilty Gear Xrd is out at the tail-end of this year. As usual, I’ll be pissing people off by playing as Chipp Zanuff and teleporting everywhere on the stage.