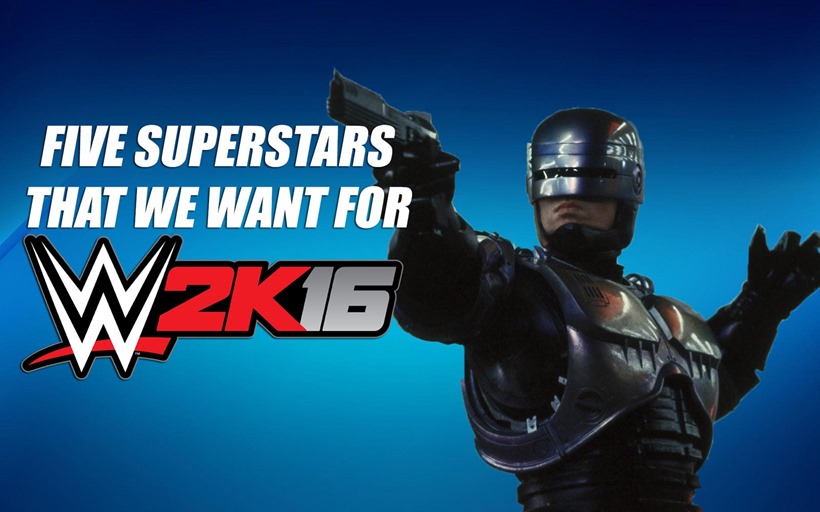 We live in a glorious age. An age where a former Governator can stroll into a seedy pub naked, and proceed to annihilate a WWE superstar and then steal his clothes. In case you haven’t heard yet, the Terminator is indeed an incentive for WWE 2K16. But I think we can do better.

So I did what I do bestest, which is butcher the English language with a Stone Cold Dangling Participle Stunner. Then I started thinking about other people who need to be properly introduced into WWE 2K16, so that I don’t have to spend hours creating them in the editing suite.

This is what I came up with: Oh yeah! Ladies and gentlemen, forget the new world order! It’s time for the Blue World order! You think you know wrestling? Well you don’t know squat until you’ve felt the righteous fury of several hundred pounds of blue rage body-slamming your ass through a table. The Blue Meanie was a legend in the WWE, for all the tens of days that he was active.

A persistent thorn in the side of one John Bradshaw Layfield aka JBL, the Blue Meanie ran rampant throughout the World Wrestling Federation, dropping asses alongside his BWO comrades Stevie Richards and Simon Dean. I mean, c’mon, the Blue Meanie had more charisma than the Rock, Stone Cold Steve Austin and Hornswoggle put together! In an industry where the majority of the performers are already featuring several bionic enhancements, we need some justice to prevent those out of control heels from taking over. What we need, is the law. And nothing says law enforcement, better than several hundred million dollars of cutting edge technology, all wrapped around the recently deceased corpse of a dedicated cop who is out for revenge.

This isn’t the first time that Robocop has made an appearance in WRASSLIN, having already helped Sting out way back in the days of WCW. Y’know, the organisation that had David Aqrquette as a world champion at one time. And it sure as hell shouldn’t be the last time we see Detroit’s finest step into the ring, with a fourth prime directive to kick your ass. WRASSLIN’ is a manly sport. Pure macho, testosterone and Y chromosomes, all bundled up in tight tights as several oiled-up men grapple one another for glory and to shift merchandise. So who better to epitomise the sport, than the greatest mayor of all time, the Metro City giant Mike Haggar.

He’s pretty much the prototype wrestler already. Huge, jacked up with way too many muscles and more than willing to shove your face into his groin before he levels an entire city with the resulting piledriver. When Mike Haggar wrestles, entire species of lucha libre performers go extinct. And it’s time for the final fight, in the showcase of the immortals!

I’m going to be honest with you guys: I freakin’ hate Scooby Doo. Except for Velma, but that’s a story for another day of Jinkies. Scooby Doo is an absurdly popular cartoon that should have been drowned in its sleep ages ago. And no single character is more annoying, than freakin’ Shaggy.

Seriously, at what point would any detective team consider having a burnt-out pothead with a permanent case of the munchies on their side? Shaggy is barely useful as live bait, a job that he continually messes up in every single episode that he stars in.

So I would derive all manner of joy from being able to throw him off a steel cage and into some tables below. I call that the Scooby Stunner. It kind of sucks that we’re not allowed to mention that wrassler whose name rhymes with Schmulk Shmogan. But the WWE needs somebody with charisma, weirdly tanned skin, a receding hairline and a finishing move that involves getting a taste of leathery thigh muscles. Well to all my love slaves out there, I got your man right here!

I’m talkin’ about Thunderlips beybeh! A pure love machine monster who’ll give you a whirlwind tour of suplex city, Thunderlips ain’t no joke! Hell, he even taught Rocky Balboa a thing or two in one epic match. BEYBEH.