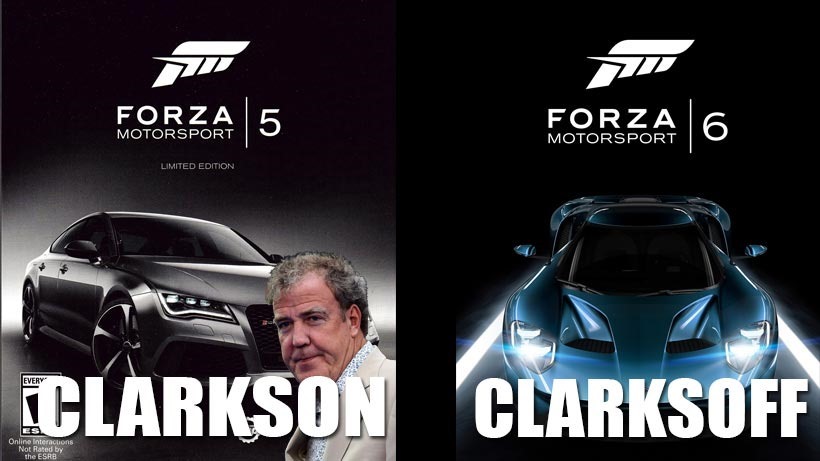 If you’re a fan of motoring, go-faster stripes, fuzzy dice and POOOOOOOOWER, then you’re most likely a fan of Top Gear as well. The most recent iteration of the popular motoring show has been around since the early 2000s, featuring a formidable triple threat of motoring shenanigans from the likes of James May, Richard Hammond and Jeremy Clarkson.

Hell, it was an entertaining and fun show, with ambitious but rubbish motoring advice contained in every season. Then Clarkson cocked up a sweet deal, and was rightfully fired for being a complete and massive prick on the set of the show and assaulting a producer.

Thing is, that act had ramifications. Because Top Gear is more than just a TV series. It’s a franchise which extends to live shows, endorsements and merchandise. One such example of this, was Top Gear content being featured in the Forza Motorsport games. So where’s Clarkson now?

“Jeremy’s not in the game,” Turn 10 creative director Dan Greenawalt said to GamesRadar. Thanks to the acrimonious split with the BBC, Clarkson’s Top Gear content for the game was cut out. But that doesn;t mean that there’ll be zero sign of any Top Gear branding in the game.

So the Top Gear Test Track’s in there, there’s Stig one-on-ones, there’s Top Gear challenges – those challenges were written by some of the writers – and it’s fully integrated.

Hammond and May will also be present, hosting their own sections in the Showcase portions of the game which includes other notable driving faces as well. In other words, cutting Clarkson out wasn’t a train smash.

“Before any of the Top Gear… issues happened, we changed the way our Career mode worked,” Greenawalt explained.

We wanted to bring in more voices in motorsport, so we’d reached out to these automotive race car drivers and celebrities, and that automatically made Richard and James one of many.

So when the split happened it was easy to just say ‘well, you guys are still hugely passionate automotive icons, so stay involved’.

Fair enough. Of course, Top Gear as we know it is quite dead, even though the BBC has plans to retool it with a new team led by that chap who once paid way too much for a rare Ferrari. I think it’s the guy who plays Captain America in the movies lately, Chris Evans.

And not having Clarkson in Forza 6 probably won’t mean much at all when the game hits shelves. Besides that trio will be back soon enough, thanks to them inking a new deal with Amazon. POOOOOOOOWER!