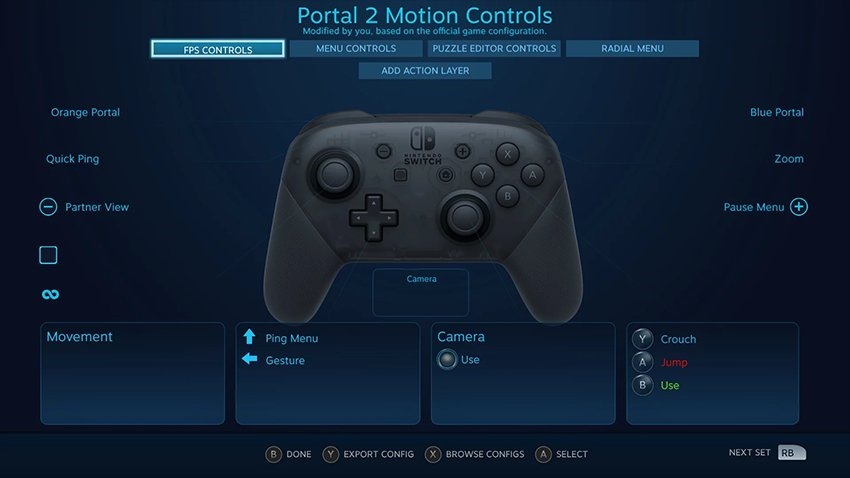 The optional Pro controller for the Nintendo Switch is one of the best controllers you’ll find. It has an asymmetrical analogue stick design (like all good controllers should), has great battery life, a passable d-Pad, fantastic vibration and it just feels great. There are still a few issues with it. For some reason, Nintendo hasn’t embraced the idea of analogue triggers which makes it less than ideal for racing games – but it does feature really precise gyro aiming, which makes it one of the best controllers for FPS gaming.

“We think it is a great device with a feature set that pairs nicely with your Steam catalog,” says Valve on its blog, “The d-pad is ideal for fighting games and platformers and the gyro enhances aim in your action/FPS titles.”

The controller can pair with a PC either through a USB cable, or through Bluetooth – and as we said before, it’s the gyro aiming that really makes it neato. Yes, the Dualshock 4 has the same functionality, but it’s nowhere near as nice. Once you get used to gyro aiming on a controller, it’s hard to turn back. While the analogue sticks are fine for broader movement, using the gyro for fine-tuning becomes second nature.

Should you be a PC gamer who happens to own a Switch Pro controller, all you need to do is opt in top the latest Steam beta, and then you’ll be able to enable Switch controller support.

“First, opt into the Steam Client Beta then enable support globally by checking the ‘Nintendo Switch Configuration Support’ option in the Controller Settings page. In case you missed it, this is the same page to enable PS4 and Xbox Configuration support. By checking this box, you are able to create, share, and browse Switch Pro Controller configs on a per-game basis. The Controller Settings page also contains a global option to ‘Use Nintendo Button Layout’. This will swap the A/B and X/Y buttons of your loaded config – something that will come in handy if you choose a Steam Controller, Xbox, or standard template config.”

Because of the native Steam support, users will be able to create and share custom profiles, which means we could see the controller’s strengths being played to in specific games.