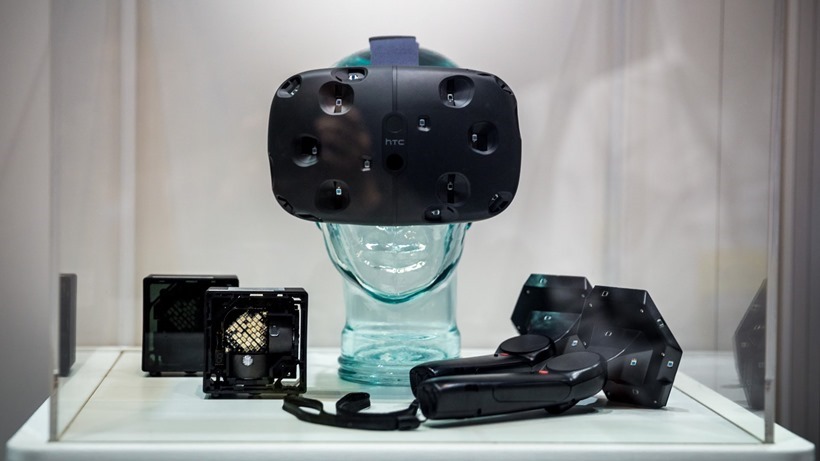 I got a lot of personal face-on time with the frontrunners in the VR race at E3 this year, and I walked away feeling incredibly optimistic about both the Morpheus and Oculus Rift for next year. One headset that wasn’t on show was Valve and HTC’s Vive, which was only revealed a few month ago. Despite that, the intriguing headset is on track to beat its competition to the punch, and actually arrive on shelves later this year.

That’s always been plan, and straight after their impressive showing at San Diego Comic-Con HTC felt the need to reiterate that. HTC executive director of marketing Jeffrey Gattis has stated that the company is aiming for a mid-October event to reveal the final, consumer version of the headset and wireless controllers, while aiming for a holiday launch thereafter.

That would put the Vive a few months ahead of the Oculus Rift, which is expected in early 2016. Easily the Vive’s closest competitor given the platforms they are designed to work on.

“We remain committed to what we said at our keynote in Barcelona back in March, that is, the first consumer units will be on sale and in the hands of customers before the end of this year.”

Given the short timeframe between now and October, it’s safe to assume that the final version of the Vive is pretty much locked down and ready to go. Given HTCs desire to inspire with elegant design, it’s probably just a matter of deciding between two-tone white and gold or something equally pretentious. Suffice to say, the Vive is going to turn heads in more ways than one.

But, most important, the Vive is generating a lot of buzz from the numerous studios who have already received their development kits – which says a lot about the innovative tech Valve has brought to the party. If they do manage to hit that holiday release, Oculus might be in a spot of trouble.