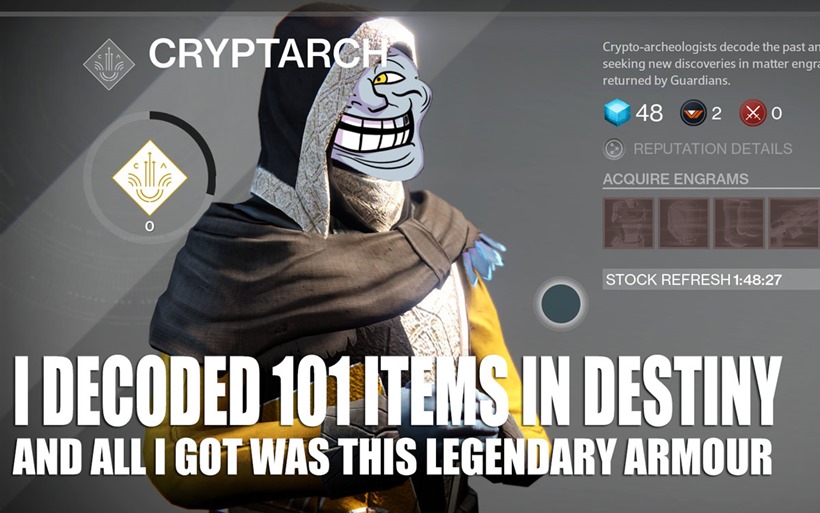 The Cryptarch! His knowledge is legendary, but his stinginess with engrams may eclipse that when Guardians reflect years from now, on how their blue treasures were naught but cheap baubles when deciphered.

Loot makes the world go round, and it’s pretty much the economy of Destiny. Whether you’re after some Legendary armour to help raise your light, or an Exotic within which to place an exotic shard, this is what keeps Destiny rolling on.

And getting that gear in Destiny, will always come down to sheer luck. I’d heard multiple stories about the mythic rarity of good gear that the Cryptarch would sometimes bestow on Guardians. So I decided to do some investigating, and see for myself.

Which took me on a journey of engram-collecting, where I gathered 101 pieces for the Tower and Reef cryptarchs to decode. Here are my results:

Of all those engrams, only one of them yielded a legendary item into my hands, in the form of some torso armour. Still, I got a good deal of motes of light, and even a handful of Strange Coins along the way.

There is of course, no rhyme or reason to the Cryptarch. Maybe you’re lucky. Maybe you get the gear that you have been searching for, for so many years. And I still had fun. Whether I was watching engrams pop up from a dead Fallen captain in Destiny, looking for a treasure chest after surviving a House of Wolves raiding party or blind luck, it was kinda neat.

Also, that cryptarch really is a bastard.