You know the expression that the shoes make the man? Well, accessories certainly can be important. inFamous Second Son even let people get custom vests in game, but it’s actually the beanie that made Darryn the happiest. But Delsin didn’t always have that hat – concept art shows something very different.

Delsin didn’t always have his signature beanie. In fact, in this concept art courtesy of DualShockers, we see him showing off his Native American heritage with long black hair and a bandana. Don’t worry, though – at least he has ear buds. 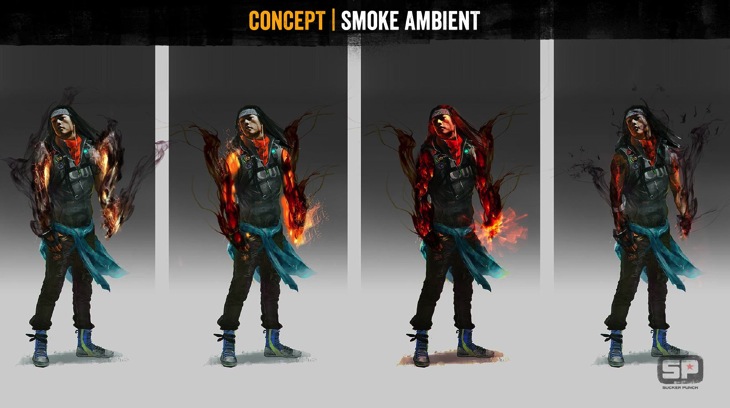 They probably steered clear of this design because of the requisite Tress FX it would entail. Rendering hair is a mission, and while the new generation consoles can handle it, it’s not always worth the time investment required for developers.

I prefer the more “urban” look of the final Delsin – he seems a bit more relatable and “normal” that way. At least I can imagine having those powers myself, instead of just staring at his flowing locks. Would you have preferred something closer to the concept art, or did the beanie make the character work?

I love when they show concept art like this. It just goes to show why they shouldn’t release too much information early on. Imagine if they’d shown us this first – everyone would be screaming about downgrades or some such controversy when they decided to go the beanie route. Creativity means experimenting with a bunch of ideas, not all of which will be successful. If those ideas are exposed to the world, the backlash can be ruinous.