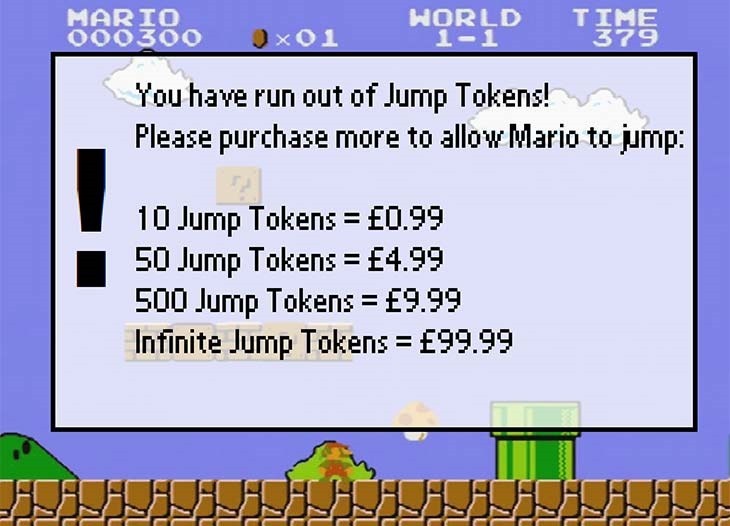 Nintendo has so far resisted the gilded allure of microtransactions. They’re pretty new to the DLC thing, and have only just attempted free-to-play with Steel Diver, but the company’s stayed away from microtransactions and the smartphone gaming market. One of its investors has sent a letter to Nintendo urging the company to start .

“Just think of paying 99 cents just to get Mario to jump a little higher,” Fischer said; a statement that is currently causing my eyeballs roll back in my skull.

“We believe Nintendo can create very profitable games based on in-game revenue models with the right development team,” he went on. “The same people who spent hours playing Super Mario, Donkey Kong, and Legend of Zelda as children are now a demographic whose engagement on the smartphone is valued by the market at well over $100 billion.”

Nintendo’s in enough trouble, and doesn’t have the public image it once did – especially where “core” gamers are involved. Implementing this sort of thing, though it might lead to short-term fiscal increases, would only hurt, something Iwata understands.

“If I was to take responsibility for the company for just the next one or two years, and if I was not concerned about the long-term future of Nintendo at all, it might make sense for us to provide our important franchises for other platforms, and then we might be able to gain some short-term profit,” Iwata said last year, when investors tried to convince Nintendo to make mobile games.

“However, I’m really responsible for the long-term future of Nintendo as well, so I would never think about providing our precious resources for other platforms at all.”

Funnily enough, the “whales” that make up so much of the cash-generating Smartphone gaming bubble account for 0.15% of the userbase – and make up 50% of the revenue. That’s pretty sobering stuff. without whales, the entire freemium premise would fall on its head.