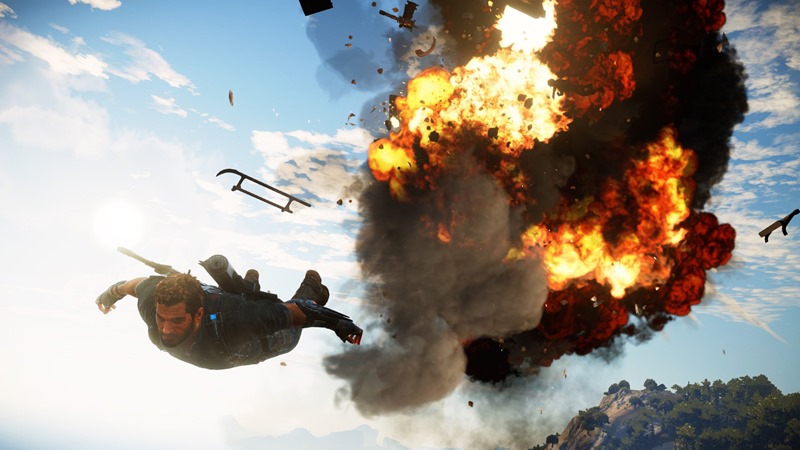 Rico Rodriguez: He’s a man’s man. He doesn’t look at explosions. Explosions don’t look at him. The previous Just Cause game was all kinds of guilty pleasure fun, a wild romp of flammable substances, buildings and henchmen. And by the sound of things, developer Avalanche wants to run with that theme and own it in Just Cause 3. A game which will be their ultimate sandbox experience.

“We’re a systems-driven game,” game director Roland Lesterlin said to GamesRadar. “This is a sandbox, more of a sandbox than almost anything else out there.” That system has resulted in a better-prepared Rico Rodriguez, as the CIA agent of anarchy can now switch between his trademark parachute and a wingsuit, with players able to switch between the two at any time when airborne. Combined with the grappling hook, and now players are faster and more manoeuvrable than ever. “In JC2, all other inputs were muted when you were reeling into a point with the grappling hook,” design principal Francesco Antolini explained. 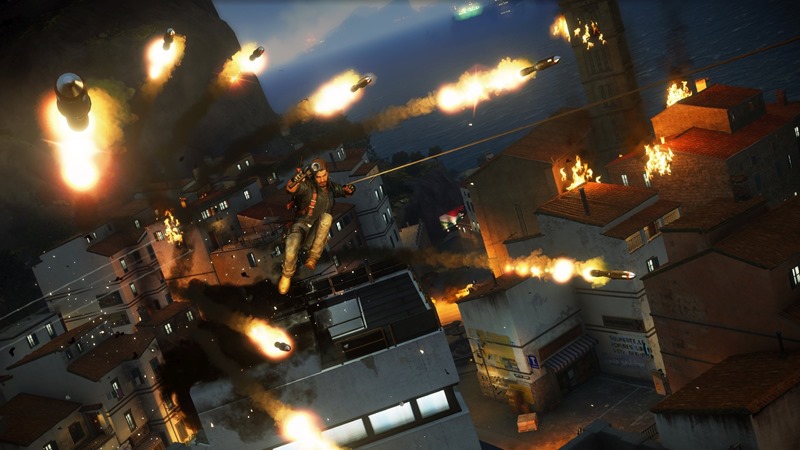 In JC3, not only can you shoot while grappling, you can grapple on to an enemy, reel in for a dive kick and shoot while you’re doing so, before moving the camera and launching another grapple off.

The tethering system has also been upgraded, with Rico now able to launch three of them and chain them together for more ridiculous experiments, and rapidly retract them back for a massive explosion of goon, explosive barrel and vehicle if you so desire. Tethers can also be cancelled at any time, while retaining any momentum that has been built up. “We’ve been looking at going up to five tethers,” Lesterlin said.

Anything above that becomes a little too hectic and it’s hard to keep in mind how it works. Even at five it might be too much. We’re still figuring out the sweet spot, but we’ve been working on our physics models to allow that anyway.

Just Cause 3 even has a former Criterion developer on board, in order to make driving an experience that isn’t a complete nightmare, unlike in the previous games. Even with the glide suit and parachute possibly making vehicular travel unnecessary, Avalanche wanted to polish up that feature for Just Cause 3. “Because we’re an open world and cars are faster than a wingsuit,” Lesterlin explained. 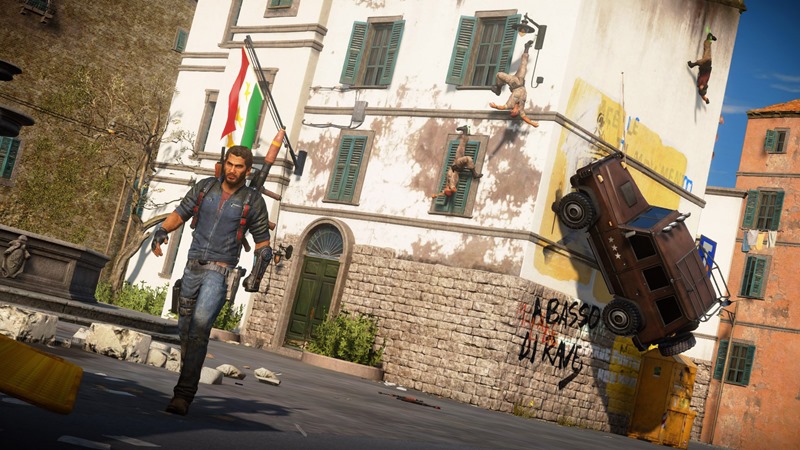 The game is about creativity. The car is another tool for you to mess around with – you can put a bunch of C-4 on a car and jump it into a base. That could be the beginning of your epic base attack. There’s full deformation; hinged parts so cars break and parts move. The feel of it has a full racing engine underneath. We do shocks, downforce and things that you’d find in a full racing game. It buys into that philosophy of an open world that’s at your disposal. If you want to spend a lot of time on challenges, then by all means. If you want to drive a vintage sports car along the Mediterranean coastline and skid around corners, sure. Maybe your big thing is rocket-propelled grenades and huge bases. Because the world is so big, we want to scratch whatever itch you have.

I don’t ask for much in games. But by the sound of things, Just Cause 3 is ready to pander to my every desire to create all kinds of havoc and baysplosions.