Home Gaming Kalahari is cancelling all those cheap game deals 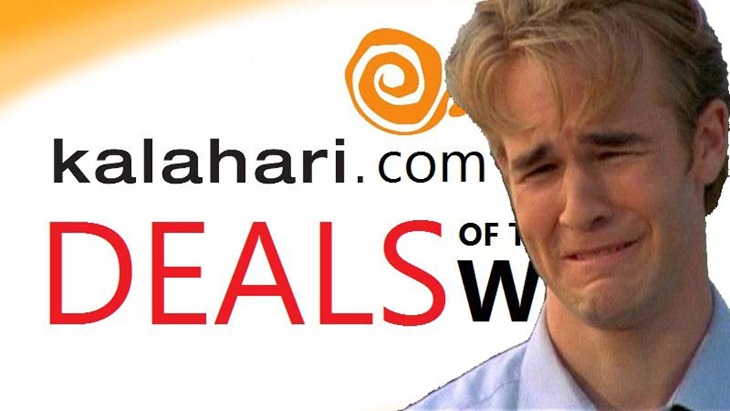 This week had a great start to it. New games, new news and all that. And then we posted abut the Kalahari sale, which saw upcoming and new games receive a pretty hefty discount. Even better, there were valid vouchers floating around the net, which could have netted you further discounts. Expect those bargains to cancelled however.

Kalahari has begun cancelling sales made with various vouchers, claiming that the voucher system was used and abused. Expect your inbox to be filled with plenty of these letters, as my personal copies of InFAMOUS: Second Son and Titanfall were just some of the many games on the chopping block:

As requested from customer services, we’ve cancelled your item. A refund has been processed and you will be refunded according to your method of payment.

We’re really sorry we couldn’t help you this time, but hopefully next time you’ll give us a chance to wow you with our great service.

Of course, refunds will follow, but you won’t get that discount again. Naturally, folks are proper livid. What happened with most buyers, is that the vouchers that were published, were stacked and used to buy a digital voucher on Kalahari. A R350 voucher could be bought for R150, and when applied to the current promotion, netted a substantial saving.

Games such as Infamous: Second Son and Call of Duty: Ghosts were being snatched up for around R300 a pop, not a bad deal at all. According to Kalahari, this system has been abused, resulting in various orders being cancelled.

MyGaming got the following response from Kalahari:

On Monday this week we kicked off our 6 Days of Heavenly Online sales with a 24 hour sale on our hottest Book, DVD, Music and Game titles. We advertised discounts of 30% off, but we actually offered even better discounts on some of our games titles which was very exciting, and very well received.

A few shoppers did however learn that there was a way to reduce the prices of their purchases even more by using some of our promotional coupon codes. We issue these coupon codes on a fairly regular basis to various groups of customers for different reasons (e.g. specific promotions or loyalty rewards). Our terms and conditions make it pretty clear that these coupon codes can only be used one at a time, and are only meant for the people to whom they are issued. They’re not transferable, and may not be used to purchase vouchers.

We give our customers some leniency in the sense that they may not all be as familiar with our terms and conditions as they should be, but we can’t condone blatant abuse. Sadly, there was some blatant abuse of these coupon codes which goes against our terms and conditions. The particular codes that were abused have been suspended and the intended recipients are being issued with replacements for their benefit.

Where the abuse was particularly extreme we may still take action in line with our terms and conditions – but we’re still analysing those orders carefully. We’ll definitely be in contact with anyone affected.

Regarding the codes that you referenced in the mygaming.co.za article below: These were codes that were being abused and which are now inactive. You’ll see that The Deal Breaker (who you credit for the article) has actually updated their piece. We’d appreciate it if you remove these codes from your article too.

While EGMR’s Alessandro Barbosa got the following Twitter response:

@capitan_barbosa Hi, we come across a large number of customers who had taken a few vouchers and unfortunately some abuse of these vouchers.

It’s a shit situation, and I’m as angry as anyone here is. Unfortunately, Kalahari has every right to do this, according to their terms of service.