I remember the exact moment Kingdom Come: Deliverance stopped being frustratingly difficult. It was when I donned an Easter egg item called the Warhorse Helmet, named after the developers. As the visor closed and I drew my sword for the next bandit encounter, my character stopped being Henry the Blacksmith, instead turning into a faceless bringer of death. After the battle was over I felt that I, as the player and as the main character, had grown. However, even as I rapidly approach the 40 hour mark, I still feel that I could grow even more. 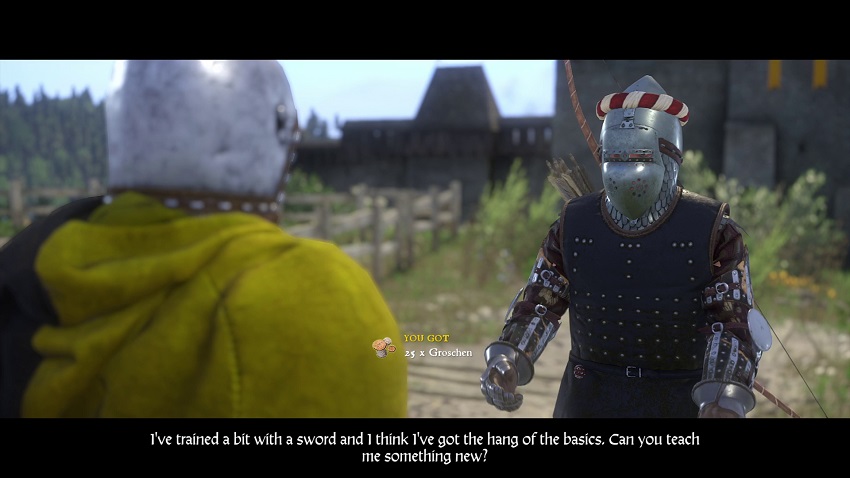 The previous entry in what is now an ongoing review in progress for Kingdom Come: Deliverance acted as an extended first impression. Maybe you should go read that, I can’t imagine why you would start here instead. Anyway to sum that piece up, Kingdom Come: Deliverance gave me wildly mixed feelings for the first few hours. It has frustrating pacing, dreadful amounts of loading screens, and a lockpicking mini-game that had me price checking DualShock 4 controllers “Just in case”. It was also one of the most engrossing, rewarding, and addictive RPGs I’ve ever played. Anyone who perseveres through the first few hours is going to have an amazing time. This is still not the complete review because I haven’t finished the game yet, instead these are my impressions after spending even more time with Kingdom Come: Deliverance.

There’s a reason I haven’t completed the storyline yet, even after 37.5 hours of total playtime. See, one of my earliest gripes about the game is that it wouldn’t take its hand off the wheel soon enough. The game doesn’t let players loose until many hours in, and that will lead to a lot of people itching to go explore. So, as soon as the game opened up a little, I disabled my main quest marker and ran off into the woods, cackling about side quests. Honestly.

Having free rein changes the gameplay considerably and players are now able to explore the kingdom of Bohemia at their leisure. There are deep forests to explore, bandit camps to raid, missions to take, and vastly stronger enemies to run away from. The game’s open world is reminiscent of older RPGs, where the difficulty does not scale with the player and some things are not meant to be attempted, yet. It was a wonderful experience being able to peek in at this world, figuring out how all the pieces worked and where the player fits in. 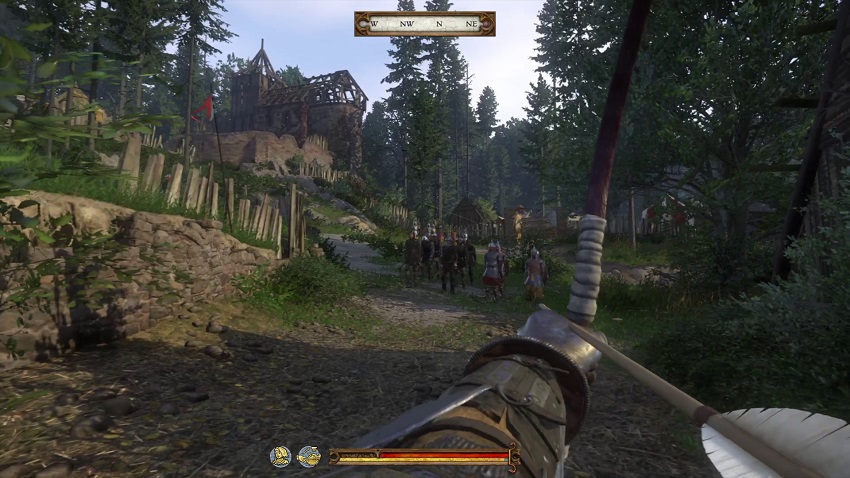 There’s a great deal of depth to the activities and gameplay features of KCD, more so than I first expected. Character growth features some diverse skill trees, ranging from your ability to get drunk to maintaining equipment. The latter even has a perk dedicated to keeping your shoes in good condition. In fact, it’s what your character is wearing that determines his charisma. In most other RPGs, charisma is just a stat that can go up. Here, NPCs will react differently depending on what you’re wearing. Being clad in armour will let you intimidate people or act brashly, but it’s not going to help you sweet talk anyone. This means changing your outfit in cities is actually recommended.

Kingdom Come: Deliverance also supports various mini-games, besides the lockpicking one I already mentioned. There’s a simple dice-gambling game, a clunky pickpocketing system, as well as a grindstone to sharpen and clean weapons. By far the deepest system is alchemy, which could almost be a game on its own. Like a Harry Potter spin-off for mobiles. Brewing a potion involves following highly specific steps, maintaining correct heat, letting potions cool, and even distilling or filtering the final product. Getting to grips with it is truly enjoyable and takes some actual practise and research to get it right. 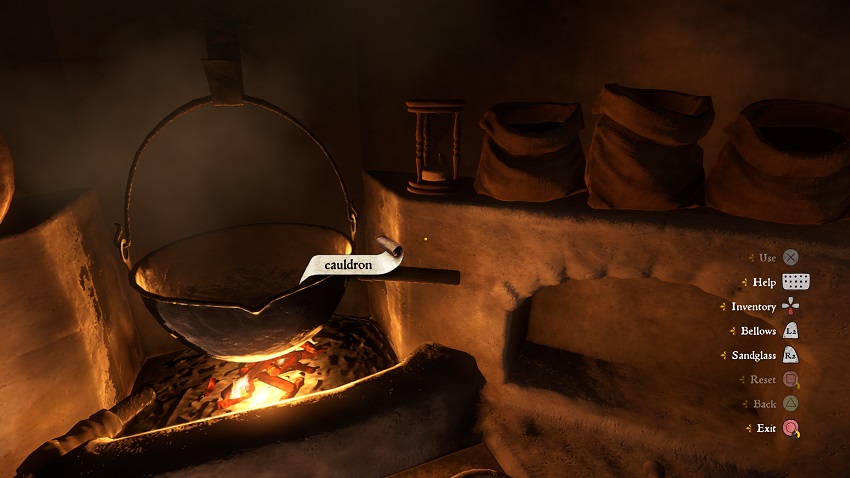 I mentioned previously that the game handles character building well, and potentially the best example of this is the quest where Henry learns how to read. Unlike literally every other game, your character starts off illiterate. Any book you open will just be a garbled mess of words until you’ve taken some lessons. But he’s not able to read everything yet, because the character can improve their reading and get progressively better at it, until every book is legible. Essentially, any writing you encounter is affecting Henry first, and will not be magically interpreted by the player. It makes it feel as though Henry is just as much a driving force of the narrative as the player.

I also need to talk about the missions because the quests are far more varied than I expected. For example, a major story mission starts with a murder investigation. But instead of just collecting evidence and tracking the bandits, players are led across the kingdom to follow multiple leads. The highlight of the quest was convincing a priest to give evidence, which involved earning his trust by getting blackout drunk and delivering his sermon hungover. Later on, players must infiltrate a bandit stronghold for reconnaissance. Kingdom Come: Deliverance gives players choices about how to tackle this, how much info to gather, and even whether or not to sabotage the enemy. It’s even possible to find a disguise and walk right in, something the game never hinted at once. It’s rare that a game lets you find your own solution, and it made the mission even more thrilling. 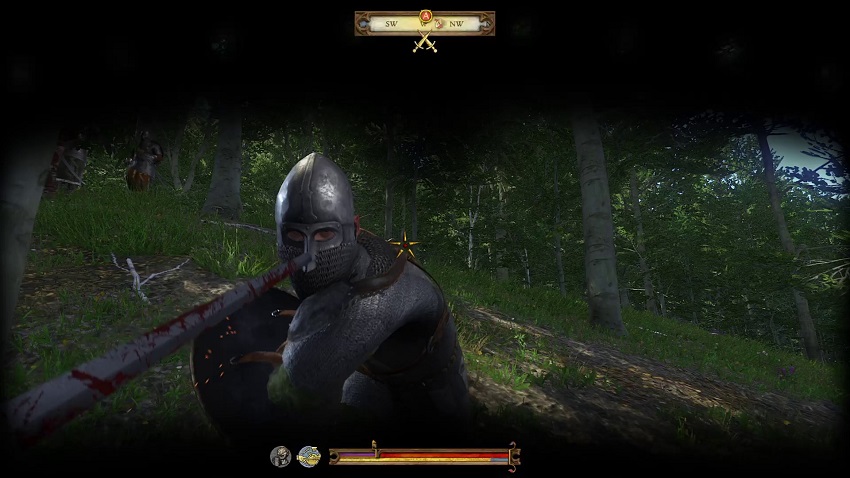 Even the simplest of fetch-quests or eliminate-the-enemy-camp quests are accompanied by unique dialogue and world-building writing. Quests usually have multiple solutions and outcomes and working your way through the quest log never feels boring. Unfortunately, some missions have time limits that are never mentioned, so players can suddenly fail something for no apparent reason.

Unfortunately, the game is flawed in several ways, some of which only came up after spending a long time with it. In the previous part, I said that the game’s world was just as interesting as any other RPG sandbox. I stand by that statement, but the more I play it the less Bohemia stands out. Environmentally, one part of the map looks almost identical to the other. There are no biomes for variety, and it’s a lot of meadows, forests, and Riverlands outside of civilisation. I get that this is realistic, but I don’t feel invested in the world like I would in Skyrim or The Witcher. I’m not quoting regional slang, I haven’t learned much of the Czech culture, and the game seems to struggle with worldbuilding on a grand scale. 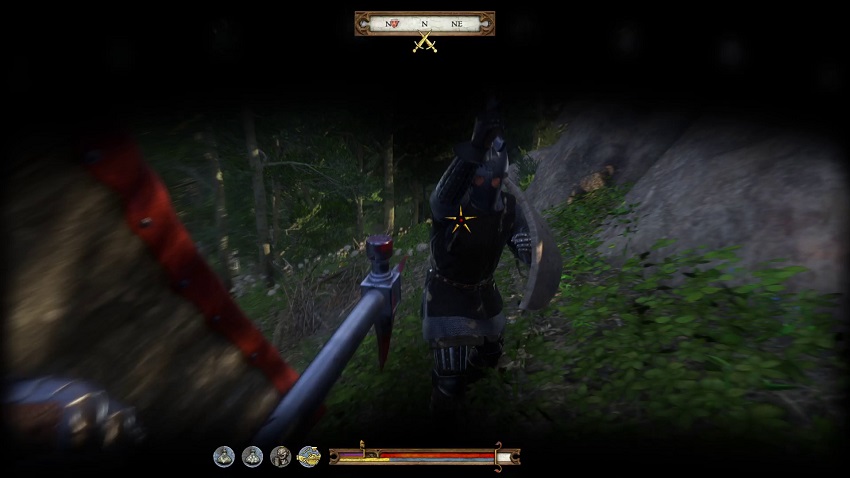 The worldbuilding isn’t helped by the inconsistent voice acting. Everyone is sporting some variety of American or United Kingdom accent, which manages to always feel out of place. It would make better sense if people in one part of the world had a particular accent, but that is not the case. Instead, everyone sports a manner of speaking that can be wildly different to their neighbours. Luckily the major characters are voiced well, and Henry’s voice actor is clearly putting in a lot of effort.

It’s worth mentioning that the game has many glitches, although most aren’t game-breaking. There are still plenty of textures not loading as well as asset clipping, and NPC AI frequently has pathing issues. Sometimes an item will even be invisible in a cutscene, and it’s apparent that medieval charades does nothing for the drama and intrigue. Also, that Warhorse helmet I mentioned earlier? Here’s what it looks like during a cutscene: 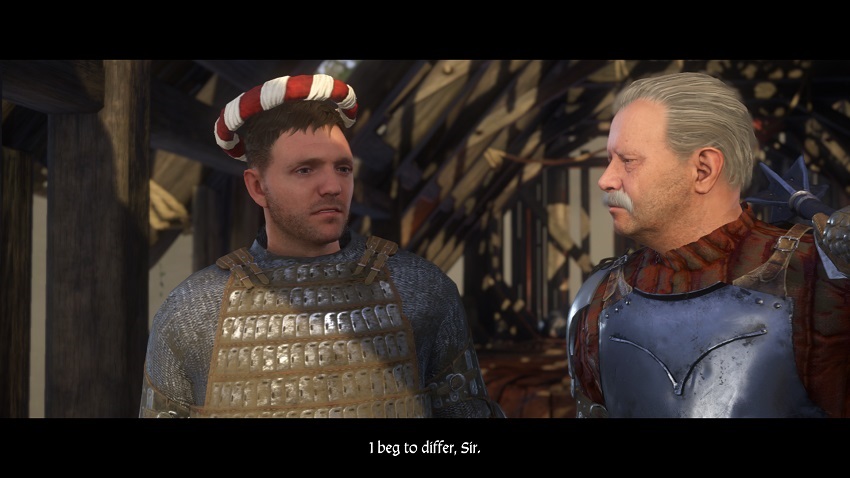 However, the more I play Kingdom Come: Deliverance, the more I want to keep playing it. Nearly 40 hours in it still has flaws and quirks, but the game somehow keeps being rewarding and engrossing. While the world won’t be truly memorable, its varied missions, characters, and gameplay keep me thinking about the game when I’m not playing it. It’s obvious that my final thoughts on the game will be positive, but I’m not ready to give it a score just yet. As I type this sentence, the game is updating itself to version 1.04, and who knows what gripes will have been fixed. Now if you’ll excuse me, I’m going to tackle some more sidequests and bandit camps for… research purposes.