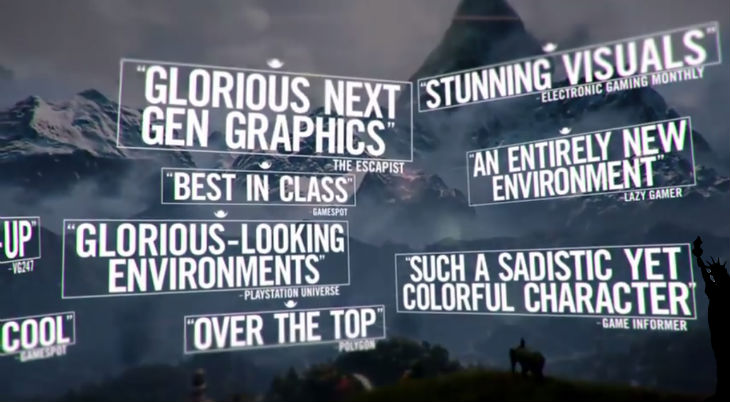 Far Cry 4 is coming, showing off an all new crazy antagonist, as well as some all new environments and gameplay. I was happy to see more at E3, and you can read more of my thoughts over here. One of those thoughts has been used in the latest trailer.

Here is the official accolades trailer from Ubisoft:

If you notice, at about the 1:40 mark (as well as in the static thumbnail for the video), our words are shown off. Yes, they are shown off along with a bunch of other words from other sites, but I’m still rather happy with this. Besides, I’m not offended about sharing screen space with the likes of The Escapist or Game Informer – it’s quite nice to be lumped in with that crowd.

Far Cry always has an interesting place in the hearts of locals – something about it seems to really strike a chord with us. Maybe it’s the open world unlike anything we see in other open world games, or perhaps it’s just because we love the crazy antagonists; it’s what we’re used to around here. Maybe it’s because the second one was set in Africa and we’ve never let go of that fact.

Regardless, Far Cry 4 looks like it will be a ton of fun and expand on the franchise in a cool new way. I will happily jump into people’s co-op games if I can – I’d just love to ride in on that weird chopper and save you all. Are you excited for the game yet? Has this accolades trailer gotten you amped for its launch, or at least happy for us having our words used for such a thing?