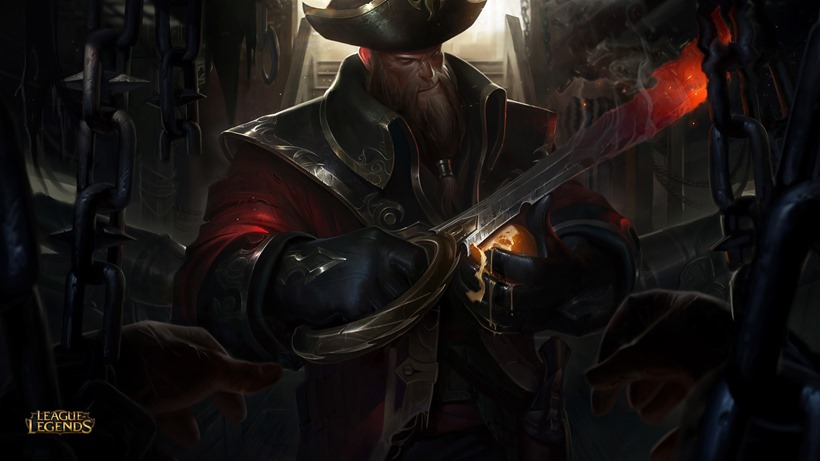 Around two weeks ago, Riot released patch 5.13 for League of Legends. It brought with it not only some gameplay changes and balances, but also two overhauled pirate champions – namely Miss Fortune and Gangplank – to the PBE. The latter of the two, Gangplank, has just received his very own champion spotlight.

Before we see him in action, let’s take a look at his updated skills. The new Gangplank has some pretty neat tricks up his sleeve.

Gangplank fires his pistol at his target, dealing damage and applying on-hit effects. If Parrrley kills a unit, the shot plunders bonus gold and refunds mana. For each Gold plundered, Gangplank gains a Silver Serpent that he can use at the shop to upgrade Cannon Barrage.

Gangplank consumes a large quantity of citrus fruit, curing all disabling effects and healing him based on his missing health.

Places a powder keg that can be attacked by Gangplank or his enemies. If Gangplank destroys a keg, it explodes in an AoE blast that slows and spreads the damage of the attack to all nearby enemies. Other casks within the zone will chain explode. If an enemy destroys the cask, it defuses the explosion and grants gold.

Signals Gangplank’s ship to fire waves of cannonballs at an area. Each wave deals magic damage and slows enemies. Cannon Barrage can be upgraded up to three times…

Death’s Daughter: fires an initial mega-cannonball in the center of the area of effect.
Raise Morale: gives allies within the area of effect additional move speed.
Fire at Will: increases the rate of fire over the duration of Cannon Barrage.

The Cannon Barrage update is interesting. As the game progresses, Gangplank earns his own currency which can be used to upgrade it three times.

The Powder Keg ability however is probably the most notable change Gangplank has received. It looks like it could take some getting used to, but if mastered, has a multitude of uses.

For example, it can be used to zone out enemies in lane, setup surprise nuke damage, cover an escape, or heck, chained up to secure a kill or turn a team fight around with style. If you’re having trouble imagining all of that, take a look at the spotlight video below instead – it’s probably a lot easier to understand when seen in action.

As unpredictable as he is brutal, the self-appointed pirate king known as Gangplank rules Bilgewater through a mix of fear, violence and cunning. Where he sails, death and ruin follow, and such is his infamy and reputation that the merest sight of his black sails on the horizon causes panic among even the hardiest crew.

I really like that Powder Keg ability! I know if I had to play Gangplank though, I would stuff up the combos terribly.

Miss Fortune has not received her own new champion spotlight yet. I imagine it will happen soon though, even if her changes aren’t as significant as those of Gangplank.

These two received overhauls to tie in with the upcoming Burning Tides event. If I’m not mistaken, we will find out more about it tomorrow, so stay tuned!