It’s a rare occurrence when the best player on the planet in a singular sport is also generally respected as one of the nicest people on the planet. So it is without any surprise that EA Sports have revealed that Lionel Messi will once again grace the front cover of FIFA 15. Even our sporting impaired Darryn doesn’t have anything bad to say about Messi apart from that people shouldn’t be paid so much to kick a dead pig around a field. There isn’t much more I can say about this but I have that damn word limit I need to hit… oh here why not read the official press release and then stare lovingly at the box art below:

EA SPORTS today announced that Leo Messi is set to appear on the global cover of EA SPORTS FIFA 15 – due out late September 2014.  Falling just short after a stunning performance that saw him receive top individual honors at the 2014 FIFA World Cup, the 27 year-old won four Man of the Match Awards and scored the same number of times in the tournament. Messi had 28 goals for FC Barcelona this past season. EA SPORTS is honored to have Messi lead a roster of international superstars set to appear on the cover of FIFA 15. This season will mark the fourth consecutive time that Messi stars on the cover of a FIFA title previously appearing on FIFA Street, FIFA 13, and FIFA 14. In that time, Messi has been on top of the football world at FC Barcelona, setting the record for most goals in a year (91) and marking a milestone as the only player to receive the FIFA Ballon d’Or four times. Leo Messi was originally announced as an EA SPORTS Football Ambassador in November 2011, a partnership that has not only put him on the cover of multiple FIFA titles but also brought a new street football pitch to Barcelona thanks to the Messi foundation and EA SPORTS.

The only differences I can spot here are the old gen consoles have a red number 15 while the new ones, and PC, have a gold 15. The rest are pretty much identical with a bit of zooming and cropping to fit the different sized cases. Oh, and who the hell uses the PlayStation Move at all, let alone in a FIFA game? I get using the Kinect voice, but PS Move? 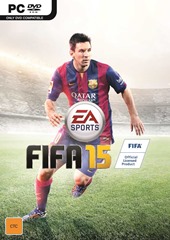 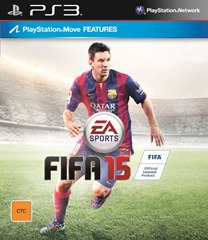 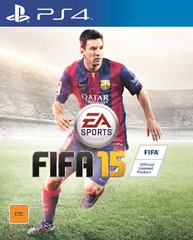 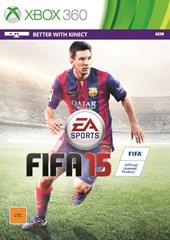 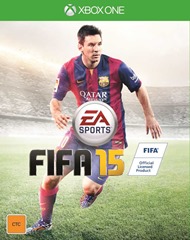 As always you can expect customised covers in certain countries who will put their local players alongside Messi in an attempt to get you to part with your cash. I can’t even think who will be the cover for the English version, so please don’t say Rooney, especially after his last disastrous year.