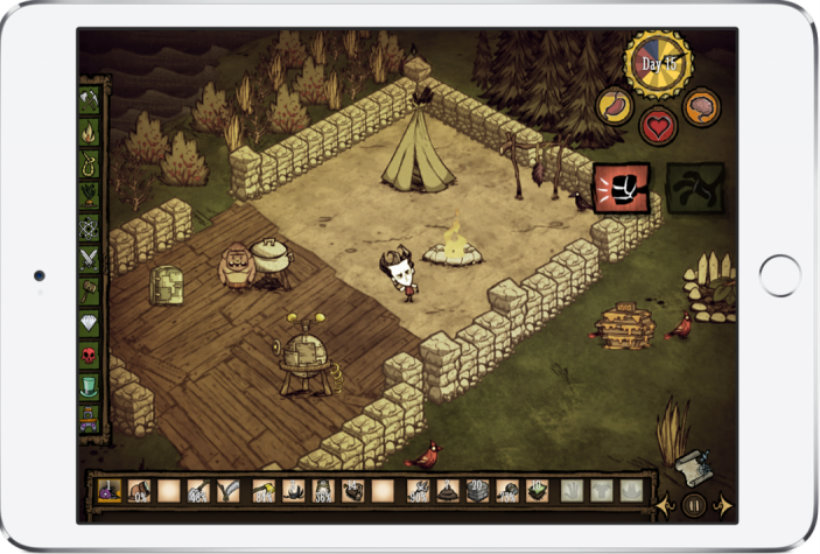 I haven’t played Don’t Starve in a while. I don’t particularly like it on PS4 – the controls or something aren’t quite right for me. But I did lose many hours in it on PC/Mac a couple of years back. With new expansions, the ability to play co-op and a ton of new things trying to kill you, if has slowly been calling me back, but now that rumors have been confirmed, I know exactly where I’m going to be playing it now.

I told you that this might be happening. At the beginning of the month, there was a rumor that Don’t Starve might be coming to mobile with a pocket edition. I thought it would take a while for things to materialize, but obviously the brains at Klei have been working on this for a while; the pocket edition is releasing on iPad… tomorrow.

Don’t Starve: Pocket Edition is packed with everything you’ve come to love in Don’t Starve on the PC, including the Reign of Giants content! We’ve also created a new intuitive touch interface lets you explore, fight, craft and manage inventory with ease.

You will need at least an iPad 3 or iPad mini 2 to survive, as well as iOS8 or higher. The game will set you back $5 and many hours of your time. I might be a bit too excited for this. I’ve already played the game so much, it’s not like it’s a new game. But I think iPad will be the perfect home for this quirky survival game. I will definitely play this on the go, or on the throne. Now to remember my preferred order of magic and science…