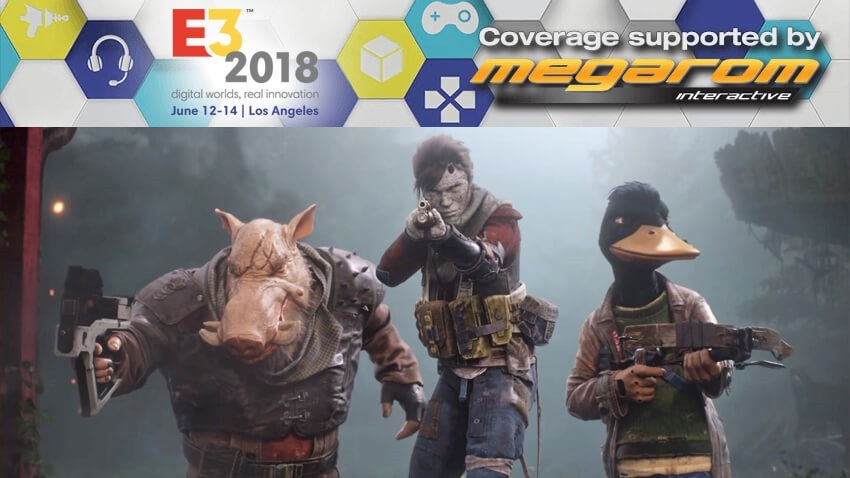 You could absolutely be forgiven for not being familiar with Mutant, the gritty, post-apocalyptic Swedish tabletop RPG from the 80s. I knew little about it either before The Bearded Ladies’ Haraldur Thormundsson exuberantly chewed my ear off about growing up with the game, and how delighted he was to be working on a video game adaptation of its most recent, semi-rebooted tabletop release, Mutant Year Zero.

With a name that doesn’t quite roll of the tongue, Mutant Year Zero: Road to Eden is that game, and it’s one of the most intriguing games I got to play at E3 this year. Set in a post-apocalyptic future where humans (or at least, humans as we know them) have been wiped out, replaced with mutants and robots. Cities lie abandoned, streets, building and bridges crumbled from years of disrepair, and nature’s started reclaiming the surface, leaving it an overgrown nest of roots and vines intertwining with decrepit and dilapidated remnants of shacks and houses.

In it, you’ll play as a band of mutants – anthropomorphic animals and mutated humanoids – as they search for Eden, a fabled haven in the middle of a post-apocalyptic hell. You’ll get to know a feisty Duck, an angry boar and tenacious stone-skin humanoid as you take them on an adventure that plays blends different genres in a way that’s organic. It’s an exploration-heavy, narrative focused RPG action adventure with a big focus on stealth. When your cover is blown and you do have to engage in combat, it shifts to being a tactical, turn-based shooter, not unlike XCOM.

The sneaky stuff is exhilarating. With former Hitman devs tuning up the stealth aspect, sneaking around enemy-infested camps in real-time, with direct control as the mutant trio is tense and exciting. It’s all about staying out of the light, and line of sight of enemies, as you crouch up around them, ambushing lone enemies to pick them off one-by-one. You control the trio as a group, able to split them off to hide behind cover or gain a strategic foothold.

Combat itself is turn based, but if you play it right, in many cases the enemy shouldn’t even get a chance to react. When you are noticed though, things turn to hell – and the game shifts to being noticeably more like XCOM, where cover, line-of-sight and thinking ahead become key. I must admit that I struggled a lot.

The snow-covered section of the game we played was some ways into the game, where it’s expected that you have a decent grasp of the game’s systems. I did not, and I saw myself regularly falling to a bunch of bastard-coated bastards called sect pyros, who engulfed my part in flames when I thought I had them well covered. In the same combat area, a medic bot happily respawned any of the enemies I had downed, making it a prime target for Dux and his crossbow. That’s the theory anyway, because I spent most of the time on fire. It’s deep, tactical, and tough as nails, and honestly? I want a lot more of it. With destructible environments changing how you approach and think about combat, a wealth of different weapons and abilities to pick up as loot, and what seems to be an engaging story, Mutant Year Zero: Road to Eden could end up being on of this year’s sleeper hits.

It’s coming to PC, PS4 and Xbox One this year. I must have it.